Sexual blackmail is a standard element of statecraft and organised crime. Individuals over which deep states seek control, are either induced to voluntarily perform proscribed sexual acts, or rendered insensible through use of drugs and then framed. Scopolamine or substances similar in effect might be used. Once compromising recordings have been made, they are used to blackmail people, facilitating the covert subversion of public organisations by deep state operatives.[1]

There is little discussion of sexual blackmail in the commercially-controlled media. On the (presumably relatively rare) occasions when sexually compromising material is released featuring public figures, its source tends to go undiscussed, as does the reason for its release. Connections to similar cases are rarely made and the topic of sexual blackmail is rarely if ever placed in context. Coverage instead remains firmly on the smaller picture, i.e. speculations about individuals' sexual proclivities. Revealingly, evidence which in other contexts might be considered actionable is often not deemed sufficient for prosecution, allowing for the story to be quickly dropped once it has had its desired effect.

“Investigating the pornography habits or sexual proclivities of a North Korean general to blackmail him into committing espionage might be justifiable. Doing the same thing to foreign religious figures, or innocent Americans is repugnant, if not illegal.”
Michael German (December 11, 2014)  [2] 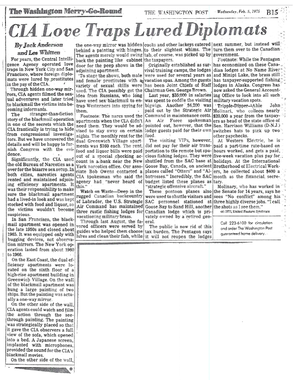 The CIA had a blackmail operation in New York using both male and female prostitutes.

In 1953 the CIA started Operation Midnight Climax, which covertly filmed unwitting people's sexual encounters with prostitutes, as part of its research into the effects of drugs such as LSD, and into clandestine recording technology.

The first step in a sexual blackmail operation is to choose the target. These tend to be people with important decision making roles, predominantly male. Surveillance can reveal their sexual orientation, which is factored in when choosing suitable bait. 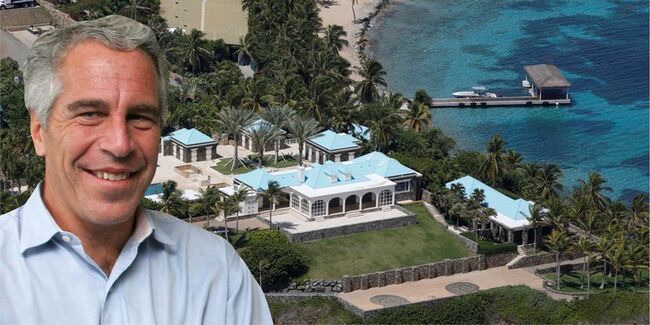 Blackmail is the use of compromising recordings in obtained in control the subjects through threat of exposure. Sibel Edmonds alleged in 2017 that Jan Schakowsky had been set up for this type of blackmail, though she says she has not seen evidence that Schakowsky complied.[3] This is to be distinguished from the obtaining of a recording in order to expose it, for example to induce a resignation, which is more properly described as a sexual sting operation.

In he past, effective recording required a prepared room equipped with microphones and hidden cameras to ensure reliable depiction of the sexual acts. UK groups had regular venues to carry out such operations, reportedly including Kincora Boys' Home, Elm Guest House and Dolphin Square.[4]

US venues are rumored to include Washington's "embassy row" and at least one of Jeffrey Epstein's private islands. Technological developments allow for easier gathering of blackmail material.

Spooks and diplomats should be well aware of this tactic, so drugs such as alcohol, cocaine, benzodiazepines, aphrodisiacs or scopolamine may be administered to lower self-control and/or impair memory. Peer pressure from compromised individuals is another vital element, for example, who may induce colleagues to drinking with them at social functions.

Where individuals are fully blackmailable, their decisions are controlled by whoever (they believe) holds the evidence of their entrapment. This provides a means whereby they can be induced to set aside personal animosity and coordinate their efforts. Indeed, a public conflict between individuals (and so, groups) can work as a screen for covert collaboration. It stands to reason that this system of subversion is employed all over the world and most heavily in western Europe and north America where the white male[5][6][7][8] is shaping the political processes.

Many different taboos surround sexual activity so, various forms may have been used for blackmail since time immemorial. Methods have evolved along with changes in sexual taboos and recording technology. The In the modern era, recording devices - particularly cameras - have boosted its effectiveness. Copies of these recordings may or may not be given to the victims, and the threat of their exposure may or may not be made explicit.

Homosexuality used to be taboo and/or illegal in many countries such as UK. This is interesting when combined with the observation that certain institutions (particularly all male boarding schools) might almost have been designed to promote it. Some commentators[Who?] have commented that various intelligence agencies have had (or still have?) a culture of homosexuality.[citation needed] (J. Edgar Hoover, for example is widely suspected of being a homosexual and of having a 40 year 'marriage' to his deputy Clyde Tolson[9][10]). Spooks are not widely noted for their habitual following of laws, so one explanation for this culture of sexual criminalization might be the desire to use sexually blackmail to rein in members of these organisations.

The legalisation of homosexuality rendered obsolete an accumulated stock of recordings of homosexual sex. Later operations instead switched to "sex" with juveniles and/or rape of children.

Eric Berne and other psychologists (Greenacre, "The conscience of the psychopath") mention an ancient game where a woman seduces the mark and just in the moment of intercourse, the husband "happens" to walk in for the purpose of blackmail. Berne includes this in the analysis of the (hysterical) game "Let's you and him fight", where a woman sets up a competition between males in an act of covert revenge or sadism.

J. Edgar Hoover became notorious for his use of blackmail and a 2012 biography claimed he had the largest collection of pornography in history (at the time, illegal), used in part for self-amusement, part for blackmail purposes. Hoover was reported to be "mostly interested in nudes of famous people".[9] The FBI attempted sexual blackmail of the Rev. Dr. Martin Luther King.

During the 1980s, the Franklin child prostitution ring was partly exposed. 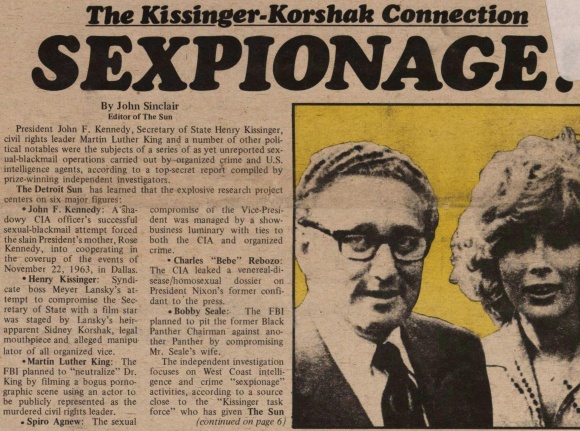 The nature of this tactic makes it hard to assess the number of individuals involved, either as victims or in the business of entrapment. It seems a fair assumption that the majority of those who are entrapped never reveal publicly that they have been subject to clandestine control. Often, only after people death does it emerge that they were being blackmailed.

The late Mark Minnie coauthored a book about a paedophile network connected the South African deep state. Many have partially exposed Hollywood/VIPaedophile over the years, including Corey Feldman, Isaac Kappy and Tracy Twyman.

The re-arrest in 2019 of notorious sexual blackmailer Jeffrey Epstein on sex crimes involving minors and his subsequent suiciding in a US jail brought the topic of sexual blackmail to the public attention.

Sibel Edmonds has been subject to various legal structures intended to limit her public disclosure of information. The tactic of sexual blackmail features prominently in the plot of her roman a clef, The Lone Gladio.