A Memory hole is a method of destroying documents that George Orwell famously described in 1984. Metaphorically, it refers to censorship or amnesia of unwanted information, especially as a result of an intention to deny the past in order to lie about it.

The phrase is often used with the preposition "down", so that documents, ideas or facts are said to vanish/slip/disappear "down the memory hole" when they are censorsed. For example, Harry Truman's call to check the CIA's powers, Osama bin Laden's denial of culpability for 9-11 or Jimmy Carter's statement that "America does not at the moment [in 2013] have a functioning democracy."[1]

The 20th century commercially-controlled media was a few to many broadcast medium, as such well suited to the implementation of memory holes. This website details dozens of 20th century events which have fallen to some extent down the memory hole, particularly those perpetrated by the US deep state, such as: 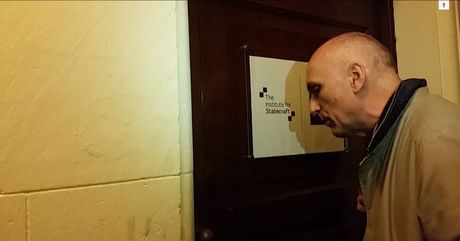 Chris Williamson MP on 19 December 2018, after Dan Lafayeedney slammed the door to the Institute for Statecraft in his face.

Computers enables perfect recall of past data, leading to the saying that the "internet never forgets",[2]. Moreover, since the internet (and especially the world wide web) allow instantaneous moving of documents globally, the realisation of an effective memory hole is nowadays very difficult (and risks the Streisand effect).

This website is an effort to counter the memory hole phenomenon, to compile information and in so doing to expose deceptions past and present. The Memory Hole Blog is similarly inspired.