The Cercle has been exposed significantly, but far less than many deep state milieux, such as the Bilderberg. William Engdahl termed it "the link that covertly tied most European intelligence services including the German BND and BfV, MI-6 in Britain, France’s SDECE, Holland’s B[I]VD, Belgium’s Surete de l'Etat and Swiss and later even Saudi intelligence and apartheid South Africa’s secret service, BOSS."[1]

As of June 2019, neither Spartacus nor History Commons had a page on this group. A research proposal by Adrian Hänni noted that "the Cercle is virtually nonexistent in academic research to this day... There are, as of yet, very few studies of the Cercle that are based on primary sources and meet basic academic standards."[2]

The first known print reference to Le Cercle was probably in Time Out magazine's 1975 leaked documents from the Institute for the Study of Conflict, which referenced the "Pinay Committee". No American commercially-controlled media sources are known to have mentioned the group.[3] Le Cercle was mentioned in 1980[4] in Der Spiegel (which also published the first article on the Bilderberg group) as a result of the controversy surrounding Franz Josef Strauss, a regular attendant. In the late 1990s, Le Cercle received more attention after a scandal broke out involving Jonathan Aitken, who was then European chairman[5]. Members who were contacted by newspapers refused to answer any questions about the group.

The earliest study of the group itself is Pierre Péan's Enquête sur l’affaire des avions renifleurs et ses ramifications proches ou lointaines, which was published in Paris in 1984.[6]

In 1986, Lobster Magazine wrote that “The Pinay Circle was set up in 1969 around the former Prime Minister of France, Antoine Pinay. Pinay was very old and seems to have been little more than a figurehead. Its chief fundraiser and leading light is the former lawyer, Jean Violet. A senior figure in the French equivalent of the CBI, Violet has also been a member of SDECE, the French equivalent of the CIA and MI6. (Faligot, 1985 p 194). According to reports from West German intelligence (in Intelligence/Parapolitics (Paris) December 1984) Violet had links with South African, American, British, Swiss and West German intelligence. The West German BND is said to be one of his sources of finance.” [7] 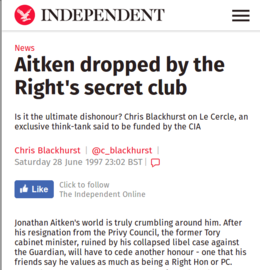 The Cercle receives very little attention from the commercially-controlled media and continues to do so. One important exception to this was a 1997 article by The Independent about Jonathan Aitken's dismissal as Chairman of Le Cercle. This revealed some members' names, but did not provide documentary evidence.[8]

The Langemann Papers, a leak via a BND officer exposed the subversion activities of the group - most clearly, the campaign to get Margaret Thatcher elected in 1979.

Ironically, the first exposure of the group on the internet was when the group made itself a 3 page website, first archived in 2000, at AtlanticCercle.com, which claimed that "The Cercle publishes papers and holds symposia for the public." This was taken down after a few years, not before the Internet Archive had recorded it.[9] The much more exposed deep state milieu, the Bilderberg was not to make a website for itself until November 2009.

The first systematic exposure of Le Cercle online was carried out by ISGP researcher, Joël van der Reijden, who began writing about the group in 2005.[10][11]

Among the cables published by Wikileaks are some references to Le Cercle.[12]

UK parliamentary rules require disclosure of monies received by MP's, which lead to some publishing their attendance at meetings of Le Cercle. The last MP to declare such a visit was David Lidington, who did so in December 2009.[14]

In 2011 Joël van der Reijden published the first Cercle documents at the ISGP after finding them in the papers of Monique Garnier-Lançon. These included guest lists from meetings in the early 1980s. These extra primary sources prompted David Teacher to pursue his study of the group and republish an update his work on the group Rogue Agents.[citation needed]

In 2017, new documents emerged to add to the publicly available picture of this group's activities.

After a discovery in the Department of International Relations and Co-operation archive in Pretoria,[16] some South African diplomatic documents relating to the Cercle emerged on the internet in 2017.[17][18][19]

In 2017 ISGP published the September 1986 Bihay and Balfroid police report, as well as a number of English and French language internal Cercle histories which came from Adrian Hänni.[13]

In January 2019, Private Eye published a piece on Le Cercle, citing existing sources such as Lobster and MP's self-reporting.[20]

On 22 July 2019, PoliticsHome published Top Tories face questions over links to secretive foreign affairs group by John Johnston, which began with the claim that "Rory Stewart and Nadhim Zahawi did not declare their chairmanship of transatlantic body 'Le Cercle' despite also sitting on several related Commons select committees".[21]

After posting a link to this website's page on Le Cercle in September 2018 in an 'off topic chat' section, user Osris was summarily banned from the of James Bond forum he had been a member of since 2010.[22]

A couple of researchers, including Adrian Hänni, have published Ph.D. theses on the group which deserve wider publication. None were known to be available online as of January 2018.