Watergate is dubbed a "scandal" by the commercially-controlled media, but this is a deliberate misrepresentation stemming from deep state control of the media. Russ Baker began an series of 2017 articles on Watergate by admitting that "What I found — what totally blew me away — was that almost everything I thought I knew about Watergate… was wrong."[1] Concurring with Webster Tarpley, Mark Gorton describes it as a coup to remove Richard Nixon from power:

“The traditional story of Watergate is one where Nixon does a bunch of bad things, gets caught, tries to cover it up, and is forced to resign; however, in reality Watergate was a plot by the Cabal behind the Coup of ’63 and corrupt elements within the CIA and military intelligence to depose Nixon. By 1973, the original leaders of the Cabal were dying off: Allen Dulles died in 1969, J Edgar Hoover in 1972, and LBJ in 1973. The death of their leaders created a power vacuum at the top of the Cabal, and as the Cabal was fighting off threats from the outside world, an internal battle was taking place for control of the Cabal and ultimately the control of power in America. Three factions fought for power: a network of old boys from the OSS (the Office of Strategic Services, the WWII precursor to the CIA), a group within the Office of Naval Intelligence (ONI), and a group within the CIA led by George H. W. Bush. The Watergate Coup served several purposes, but perhaps its most lasting impact was to ensconce George H. W. Bush as the new head of the Cabal. George H. W. Bush’s father was Prescott Bush, who was the best friend of Allen Dulles. Dulles dominated the CIA from 1953 until he was fired by JFK in the wake of the Bay of Pigs disaster. Like his father, George H. W. Bush was a graduate of Yale and a member of Skull and Bones. In a world where connections and pedigree mattered, George H. W. Bush was the crown prince within the CIA."”
Mark Gorton (November 2013)  [2] 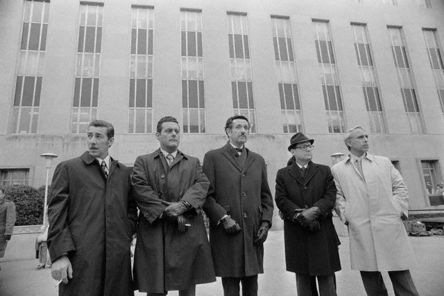 To execute the disinformation campaign surrounding Watergate, the Watergate Coup plotters turned to ex-naval intelligence officer and (FBI asset[3]) Bob Woodward, who had been inserted into the Washington Post. Woodward then proceeded to craft a series of stories that make up much of the public story of Watergate. He was informed by deputy director of the FBI, William Mark Felt, Sr. whose name was only revealed 33 years later, in 2005.

The real nature of Watergate has only emerged slowly. Webster Tarpley was an early and prominent figure who challenged the official narrative of it as an example of the system working. Russ Baker's remarkable Family Of Secrets contains a chapter on this coup. By 2015, many independent media voices have started to understand Watergate as a coup.[4]

The extreme publicity given to Watergate lead to the suffix "-gate" being used to indicate scandals. This has been used dozens or perhaps even hundreds of times.[5]