Alfred W. McCoy and Sterling and Peggy Seagrave claim that Nugan Hand was totally CIA controlled (via Paul Helliwell), seeing it as part of a series of CIA-controlled banks, preceded by Castle Bank & Trust and succeeded by the Bank of Credit and Commerce International (BCCI). They state that the bank was just small stepping stone for the CIA in laundering capital that started during World War II.[1][2]

Use of CIA Figureheads

The Nugan Hand Bank gained respectability by the recruitment of a number of retired senior U.S. military and intelligence personnel, such as former Rear Admiral Earl P. Yates as bank president and ex-CIA head William Colby as legal counsel.[3]

According to a former employee speaking in 1980, the bank paid commission of up to 2.5% on unsecured investments of $1m or more, when the going rate was around 0.25%. Together with related costs, the bank was paying over 12% to access funds.[4]

As a paymaster for the CIA, it has long been a subject of speculation that the Nugan Hand bank played some part in the 1975 Australian coup which dismissed the Australian prime minister Gough Whitlam.

The bank never became involved in traditional merchant banking activities like equity investment or mortgage financing; instead, its principals sought all manner of unconventional investment opportunities, including gun running and attempts to corner various commodities markets, such as Malaysian rubber and Indonesian oil.[4] Via its Cayman Islands subsidiary it also provided tax avoidance and evasion schemes.[4]

Nugan Hand Bank's most brazen fraud was possibly the theft of "at least $5 million, maybe more than $10 million, from American civilian and military personnel in Saudi Arabia. The man in charge of Nugan Hand's Saudi operations was Bernie Houghton, the barkeep with high-level ties to U.S. and Australian intelligence. It was 1979, the year of OPEC's highest oil prices ever, and Saudi Arabia was awash with money. Whole new cities were planned, and thousands of American professionals and managers were arriving to supervise the hundreds of thousands of newly arriving Asian laborers."[5]

"The bank collapsed with debts in excess of $50 million and a subsequent royal commission found evidence of money-laundering, illegal tax avoidance schemes and widespread violations of banking laws. Over the years, the two words Nugan Hand became shorthand for drug-dealing, gun-running, organised crime and clandestine intelligence activities."[6] Michael Jon Hand went missing and no one connected with the Nugan Hand bank was convicted (maybe not even charged) of a crime.[citation needed]

In November 2015, Michael Jon Hand, described as "one of Australia’s most wanted fugitives" was found to be living in USA.[6] After a brief flurry of posts from the commercially-controlled media, they suddenly went quiet, prompting a WhoWhatWhy commentator to remark "And so it goes. Somewhere, Michael Hand must be smiling at how easy it is to get away with crimes when your employer is the CIA."[7] 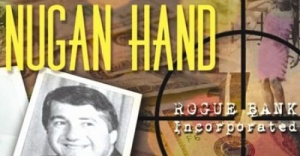