From Wikispooks
(Redirected from Passport)
Jump to navigation Jump to search

The Lost and Found ID syndrome is a simple, if sometimes highly improbable, trail of identifying documents. A commonly feature in cases of "watershed violence", it might have been for investigators to pick up on. As Russ Baker noted in 2015, this allows easy parallel construction to ID "lone nuts" - facilitating false flag events by minimizing time spent time available for reflection on possible perpetrators.[1] 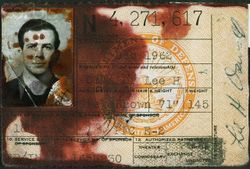 Oswald’s military ID, said to have been stained by FBI fingerprinting fluid

Lee Harvey Oswald, the supposed "lone nut" killer of John F. Kennedy purportedly dropped his wallet, which was found at the murder scene of J. D. Tippit. This story was soon revised to claim that the police took the wallet from him after he was arrested.

The bundle of evidence used to frame James Earl Ray

James Earl Ray, the supposed "lone nut" killer of Martin Luther King, who had been allowed to escape from prison shortly before the attack, reportedly panicked and dropped a bundle of items on the sidewalk to be found later - including his rifle, binoculars, clothing, prison radio, and a newspaper clipping revealing where King would be staying.

A month after 9-11, two Israelis were arrested in the Mexican Legislative assembly in what appears to have been a failed false flag attack. As well as carrying pistols, a hand grenade and dynamite, they were reported to have been in possession of Pakistani passports.[2] After "very high level emergency meetings" between "Mexican Secretary of Foreign Relations Jorge Gutman, General Macedo de la Concha and a top Ariel Sharon envoy" they were released without charge.[3] 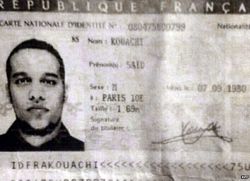 The pattern of ID papers helping authorities to pin down suspects continues.[4]

Said Kouachi, a supposed perpetrator of the Charlie Hebdo attack left his identification card in the abandoned getaway car.[5]

The Independent reported that "A Syrian passport has been found on the body" of one of the suicide bombers who committed the 2015-11 Paris attacks.[6] Al Jazeera "spoke to explosives and forensic experts, who offered an explanation for how a paper document could survive a suicide blast despite close proximity to the bomber."[7] German Interior Minister Thomas de Maiziere stated that "There are indications that this was a planted lead, but it still can’t be ruled out that this was indeed an IS terrorist posing as a refugee".[8]

After the 2016 truck attack in Berlin, a "German security official" told CNN that the suspect was known to the authorities and had been arrested for use of forged documents on his way to Italy but was released. CNN reported that "The suspect’s identity papers were found inside the truck."[4]

Driss Oukabir was arrested after his passport and ID discovered at the scene of the 2017 Barcelona attack. He stated that they had been stolen.[9]

'Franco A.' was "temporarily detained" by Austrian police at Vienna airport, after he tried to retrieve a loaded, unregistered, handgun he had hidden in a toilet there days earlier[10] which authorities claimed was to be used in an "act of state-threatening violence".[11] A fingerprint check revealed that in December 2015 he had created a false identity for himself as 'David Benjamin' a Syrian fruit seller.[12]

One might think that fiery plane crashes would destroy fragile documents such as passports or credit cards, especially if the plane's black boxes were never recovered. If so, one would be surprised by some recent official narratives. 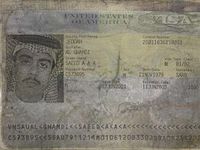 Three of the 19 hijackers' passports supposedly survived the fiery crashes of the planes which took their lives on 9-11. In New York, Satam al-Suqami and in Pennsylvania Ziad Jarrah and Saeed al-Ghamdi. No explanation has been proffered for how a passport could survive a crash which purportedly destroyed all the planes black boxes. FBI agent A. Todd McCall said the hijackers "thought their identification would be destroyed during the attacks," but, he added, "They were wrong."[13][14] The 4th and final passport that supposedly survived was that of Abdul Aziz al Omari, supposedly recovered from luggage that did not make it from a Portland flight to Boston on to the connecting flight which was American Airlines flight 11.[15]

Mohamed Samir Ferrat was killed by the explosion of flight TWA 800. The New York Times reported in 1996 that "about a week after the crash" his credit card was used. It reported in explanation that "law enforcement officials said they believed that the credit card had probably washed up on the sand and was found by a beachcomber."[16]

25 August 2016 Robin  How can a passport survive a plane crash better than a black box?