Rudi Dekkers is the Dutch-American owner of the Huffman Aviation flight school, with strong links to drug trafficking.

Dekkers grew up in a poor family in the Netherlands, and moved to Spain quite young, before moving to Florida in 1993.

Dekkers was named in an article by Dutch newspaper NRC Handelsblad as someone with the attitude "rules are for others" with the only rule in life for Dekkers being "what can you get away with?" About his money laundering and tax evasion case Dekkers remarked to not feel guilt and to have "earned a lot from it".[1]

Dutch prosecutors called his 1993 conviction in the Netherlands for embezzlement "the handiwork of organized crime."[2]

On August 23, 2001, a former female employee initiates a suit to enforce the settlement of a charge of “severe” sexual harassment by Dekkers. Huffman Aviation earlier agreed to pay her $15,000 in return for her not suing them.[3]

After 9/11, Rudi Dekkers, by some reports a friend of Mohammad Atta who spent a lot of time with him,[4] described him in vague and distant terms, as merely another pupil of his flight school. "My personal feeling was Atta was an asshole first class".[5] Dekkers was - by his own account - pressured by the Department of Transportation to "resign immediately" following the attacks or face cancellation of any flight tickets he had or would've purchased, saying he was used as a scapegoat, calling accusations of him being an operative, CIA-Agent or extradited by the INS all "nonsense-stories". Dekkers raised questions at the FBI-accusations asking "why get a license? It's a license to fly, not to kill." Dekkers remarked the flight simulators were sufficient for Atta to fly. Dekkers had $12million in assets and sold everything for a penny on the dollar, and closed the school in 2002.

When independent journalist Daniel Hopsicker asked Sergeant Mike Treanor of Venice Police (who he has termed "an honest local cop"), whether Rudi Dekkers had ever been arrested, he learnt that “The FBI took all our files, everything. They loaded the files right outside this window, into two Ryder trucks, then drove them onto a C-130 military cargo plane at the Sarasota airport, which took off for Washington with Jeb Bush aboard”. Remarkable in itself, this is especially interesting since Hopsicker reports that the files never arrived at FBI HQ, indicative of a clean-up operation by deep political forces.[6] 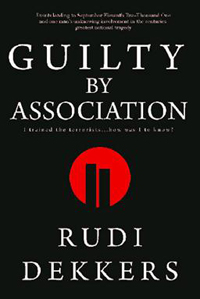 "The Untold Story of Rudi Dekkers"

Dekkers told his version of events in a book, Guilty By Association - The Untold Story of Rudi Dekkers which describes "the authentic journey Rudi unwittingly took with September 11 hijackers, Mohamed Atta and Marwan Al-Shehhi before they embarked on their fateful mission".[7] Vaguely detailed in the book is his work at his flight school; while claiming plausible deniability about almost all operations in the flight school, Dekkers remarked he lured Mohammed Atta and Marwan Al-Shehhi specifically by giving the two an amount of time in his hyper sportscar for the amount of gas they'd buy.[8][9] Dekkers his book was promoted at a TEDx talk by himself in Harderwijk, Netherlands in April of 2020[10].

Upon research by a Dutch journalist, Dekkers was found in 2011 in Florida. Dekkers appeared depressed with a tawny look, the bank repossessed his house, jobless, illegally tapping electricity, living on stamps eating only once per day, being hunted by bailiffs to take his car, biting off his nails constantly, being in the middle of a divorce and having an expired visa.[11]

On 4th December 2012, Rudi Dekkers was arrested in the parking lot of a flight school in Houston in early December carrying a suitcase stuffed with two pounds of heroin and more than 80 lbs of cocaine. He was charged on 4 counts, together with Rogelio Martinez-Flores. On February 7, 2013 the judge issued an "Order on a Sealed Motion."[12] The case[13] was still in process as of December 31, 2013.[14][15] Dekkers pled guilty to one count June 18, 2013.

Dekkers is quoted by Daniel Hopsicker as telling an undercover agent "I’ve been a drug pilot for years. Drugs. Money. No problem. What do you need?".[12] The agent summarises this in his affidavit, that Dekkers admitted that he was "involved in narcotics transportation using private aircraft and that he has flown narcotics and currency previously without any problem."[16]

Arne Kruithof - who's flight school trained Siad Al Jarrah - survived a suspicious heavy plane crash as well in 2002. Kruithof was noted in 2012 to be one of the few people still in contact with Dekkers, mostly over Facebook.

“A few months ago Rudi wanted to visit, drink some beers. But he never showed up. He said over the phone 'I've never been so poor in my life'. I saw him making beautiful trips to South America and Middle America. In light of recent developments, maybe you need to place questions at that.”
Arne Kruithof (2012)  [17]

After "escaping" long jail sentences for his drug flights and 9/11-involvement, Dekkers started a career as speaker over the world. His most recent documentary became a hit on steaming platforms in the Netherlands.[18]