From Wikispooks
< Russia
Jump to navigation Jump to search

The encirclement of Russia is a tactic by the United States, utilizing NATO, to place military capability (not necessarily through many soldiers or equipment) close to the territory of Russia.

There is no encirclement, argument to the contrary can only be Russian propaganda.[1]

“We have made it clear that Nato’s move to the east is unacceptable (...) The United States is standing with missiles on our doorstep. Is it an excessive requirement not to install shock systems at our house? How would the Americans react if missiles were placed at the border with Canada or Mexico”
Vladimir Putin (2021)  [2]

During the Cold War the NATO armies in Western Europe had a much higher number of soldiers than at present. But this is irrelevant, as a modern war between NATO and Russia would probably not be fought with conventional forces to start with, but with a surprise first strike against leadership and nuclear forces.[3] Whatever remains from the retaliatory capability of Russia's nuclear forces will be dealt with, with the missile defense shield that has been planned for Europe since the 2000s;[4][5][6][7][8][9] adding to that is the US nuclear force modernization program.

“Though it is clear that present-day Russia poses no threat to them, Nato is methodically and persistently building up its military machine.”
Alexander Solzhenitsyn (April 2006)  [10] 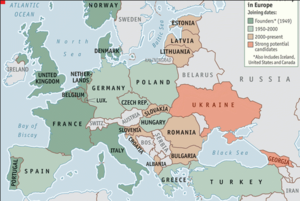 Since 1990 NATO has expanded eastward. This includes determinedly building a strong pro-NATO faction in neutral Sweden, Finland and even Austria. Part of this effort includes drawing these three countries in through EU security cooperation and partnership agreements.

For instance, in 1999, the Clinton administration accepted that Poland, Hungary and the Czech Republic join NATO. In 2002, George W. Bush accepted seven more eastern countries (Bulgaria, Estonia, Latvia, Lithuania, Romania, Slovakia and Slovenia) into NATO. In 2009, it was Albania and Croatia’s turn to join. The most recent adhesions to NATO are Montenegro, in 2017, and North Macedonia, in 2020.[11]

“Unfortunately, it’s US “diplomacy” which brought the US, Russia, Ukraine, and NATO to the current standoff. As the Warsaw Pact disintegrated and the Soviet Union collapsed, US encouragement for those events included pledges that the North Atlantic Treaty Organization wouldn’t take advantage of the situation to expand eastward. Since then, NATO has inexorably pushed in that direction, nearly doubling the number of member states. Thanks, US “diplomacy.”

Things began coming to a head with the US-sponsored coup in Ukraine that replaced its “Russia-friendly” regime with a “US/Europe-friendly” regime in 2014, courtesy of Barack Obama. Thanks, US “diplomacy.”

Then in 2019, the US withdrew from the Intermediate-Range Nuclear Forces Treaty, which forbade the US to place missiles within surprise strike distance of Russia, and Russia to place similar missiles within surprise strike distance of NATO. The US followed up by placing exactly such missiles in Poland, courtesy of Donald Trump. Some “diplomacy.”... Then the US went into overdrive (courtesy of Trump and Biden) against the opening of a pipeline (Nord Stream 2) which would have supplied Russian natural gas to Germany. The pipeline would have been a force for peace insofar as Russia likes to sell natural gas (at a fraction of prices the US can offer), and Germans like to not freeze to death.”
Thomas Knapp (2021)  [12]

A diplomatic message sent by ambassador William J. Burns from February 1, 2008, highlights the fact that Ukraine's and Georgia's aspirations for NATO membership are seen as major problems by Russia and that the diplomat is well aware of their position:[13][14]

Ukraine and Georgia's NATO aspirations not only touch a raw nerve in Russia, they engender serious concerns about the consequences for stability in the region. Not only does Russia perceive encirclement, and efforts to undermine Russia's influence in the region, but it also fears unpredictable and uncontrolled consequences which would seriously affect Russian security interests. Experts tell us that Russia is particularly worried that the strong divisions in Ukraine over NATO membership, with much of the ethnic-Russian community against membership, could lead to a major split, involving violence or at worst, civil war. In that eventuality, Russia would have to decide whether to intervene; a decision Russia does not want to have to face. 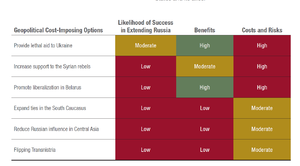 In 2019, the deep state think tank RAND published the report Overextending and Unbalancing Russia. It listed a number of strategies for getting "Russia to extend itself in strategic competition." It is noticeable that a number of the suggestions in report has been followed by policy makers. Discussing "Providing lethal aid to Ukraine" it "would exploit Russia’s greatest point of external vulnerability. But any increase in U.S. military arms and advice to Ukraine would need to be carefully calibrated to increase the costs to Russia of sustaining its existing commitment without provoking a much wider conflict in which Russia, by reason of proximity, would have significant advantages."[15]