The Federal Reserve System (FED) is a monopoly which has controlled the US money supply for over a century, set up after the 1913 Federal Reserve Act. It is still believed by many US citizens to be a part of the US government, but it is a privately owned, for-profit company.

The public at large is encouraged to overlook the fact that this is a private business that was set up by Wall St. bankers, and much is made of the token (irrelevant) public elements.

The Money Trust was an alliance of Wall St financiers. It fought for the control of the US money supply in the 19th and early 20th century, until successfully getting the 1913 Federal Reserve Act past the US government, which created the Federal Reserve, delivering immense profits both from the seigniorage of issuing the US dollar and from the ability to create booms and busts in the US. 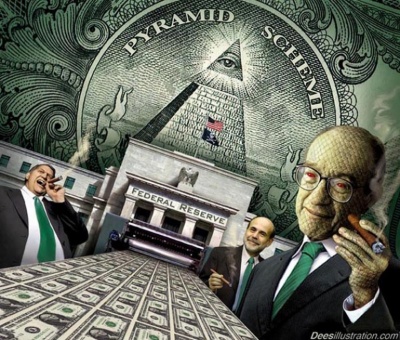 Charging interest on all the United States dollars in existence is a pretty lucrative affair... not least because the petrodollar policy effectively made the US dollar the world's reserve currency.

Who's paying the interest?

In the words of George W. Bush:

"Just remember, when you're talking about, oh, we're just going to run up the taxes on a certain number of people — first of all, real rich people figure out how to dodge taxes. (Laughter.) And the small business owners end up paying a lot of the burden of this taxation."[1]

These huge interest payments stem from lesser developed countrie's (LDCs) need to import oil denominated in dollars and other so called "aid programs". Often these loans are on variable interest rates which gives the FED additional power over LDCs.

Who's NOT paying the interest?

Taxes are used to pay off government debt, so the question is: who - on a large scale - evades taxes? Nearly two-thirds of companies operating in America reported owing no taxes from 1996 through 2000. Over 90 percent of large corporations — with at least $250 million in assets or $50 million in gross receipts — reported owing taxes of only 5 percent or less. [3] [4]

Key to Transnational Corporations (TNCs) and individuals evading taxes, hiding capital flows and real ownerships is the use of offshore tax havens and secrecy juridictions. I.e. Enron had 3,000 corporate subsidiaries and partnerships - fourth of them were registered in Grand Cayman or Turks and Caicos, two notorious offshore tax havens. [5]

"The Federal Reserve and its GSCC [Government Securities Clearing Corporation] had created a settlement environment totally void of controls and reporting – where it could substitute valid, new government securities for the mature, illegal securities, and not have to record where the original bad securities had come from, or where the new securities went."[9]