The Panama Papers is a huge (2.6TB) cache of confidential documents from Mossack Fonseca, the Panamanian provider of offshore companies to minimize taxes and/or launder money. The leak in 2015 to the International Consortium of Investigative Journalists and to Süddeutsche Zeitung, published in April 2016, identified numerous wealthy and powerful political figures and organisations of many countries. Several commentators have suggested it is limited hangout of some kind.

Early in 2015, the German newspaper Süddeutsche Zeitung and the ICIJ received documents related to the Panamanian law firm Mossack Fonseca that provide detailed information on more than 214,000 offshore companies, including the identities of shareholders and directors. Those identified include numerous wealthy and powerful political figures and organisations of many countries from an anonymous source.[1]

In 2016, Wikileaks tweeted about the Panama Papers "Putin attack was produced by OCCRP which targets Russia & former USSR and was funded by USAID & Soros".[2]

On 6 April 2016, Voice Hindi News aka Voice of America Hindi News published the "complete list of people named in the Panama Papers".[3]

In a striking illustration of the maxim that the initial response to any event fixes the main outlines of the Official Narrative in the public mind, Western media – almost without exception – focused on the names of Vladimir Putin (though struggling a bit because only "his cronies" were immediately implicated), Syria's Bashar al Assad, Iceland Premier Sigmundur David Gunnlaugsson and Chinese prime minister Xi Jinping. The Sydney Morning Herald coverage was typical [4].

Policy makers including German Finance Minister Wolfgang Schaeuble and European Commission Vice President Jyrki Katainen said the leak will strengthen the resolve of governments to combat tax avoidance and evasion. In a statement reminiscent of Benjamin Netanyahu's notorious remarks in the immediate aftermath of 9-11, Wolfgang Schaeuble said: “Even though it’s not surprising, it helps us. It increases the pressure to halt abuse.”[5]

Noting that the papers were in the hands of commercially-controlled media funded by big money, Craig Murray cautioned "Do not expect a genuine expose of western capitalism. The dirty secrets of western corporations will remain unpublished."[6]

"How quickly we forget. It was just four months ago we learned of the role of Panama in helping so many rich and famous folk to dodge their fair share of the tax burden. It was even more disgusting to see so many politicians in the rogues gallery.

"The first response from the Panamanian law firm was indignation at the breach of privacy and to raise an action against the hacker. Most of us thought he should get a knighthood or at least a medal for his guts and public spirit however, as we know from the experience of the Snowdens and Assanges of this world, political asylum is not for the likes of them.

"Indeed, how many of us remember Hervé Falciani who just last year was sentenced to five years in prison for leaking the names of 130,000 suspected tax evaders holding accounts with UBS Private Bank in Switzerland? That information went to several governments and the IMF before being discreetly buried.

"Such hypocrisy from people who we have voted into parliament to protect our interest is a breach of trust which should carry serious consequences. The threat of resignation or public disgrace is simply not enough. Yet the public memory is short and fickle and if the dust does not settle within a few days we get an official Inquiry which will last as long as it takes until the next scandal hits the headlines and wipes the memory."[7]

Edward Snowden described the leak as the "biggest leak in the history of data journalism".[8] 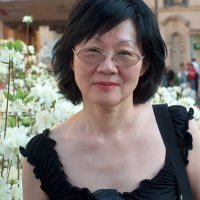 Professor Tatiana Yugay: "It’s clear that the Panama Leaks are part of the West’s hybrid war against Russia"

Bradley Birkenfeld, the "most significant financial whistleblower of all time" said

“The CIA I'm sure is behind this, in my opinion... there’s something seriously sinister here behind this [the Panama Papers].”
Bradley Birkenfeld (12 April 2016)  [9]

The Chinese Global Times observed that "...a powerful force is behind the Panama Papers" [10]

Professor Tatiana Yugay of the Moscow State University of Economics, Statistics and Informatics (MESI) and former advisor to the Presidential Administration and Security Council concluded: "It’s clear that the Panama Leaks are part of the West’s hybrid war against Russia. During the last two years, Russians have survived the devaluation of the rouble, a fall in oil prices, inflation, mutual sanctions and so on. We’re not likely to go to the barricades over Western gossip."[11] 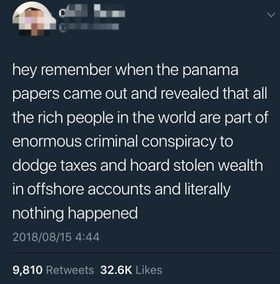 The corporate media showed very little interest in the Panama Papers. Some independent journalists, such as Daphne Caruana Galizia picked up the story and ran with it.

Daphne Caruana Galizia, the Maltese journalist and blogger "who led the Panama Papers investigation into corruption in Malta" was assassinated on 6 October 2017.[15]

In 2019, Mossack Fonseca took legal action against Netflix to try to prevent release of their film, The Laundromat about the leak.[16]

A Panama Papers victim on Wikispooks