UTA Flight 772 of the French airline Union des Transports Aériens was a scheduled flight operating from Congo Brazzaville, via N'Djamena in Chad, to Paris CDG airport in France.

On Tuesday, 19 September 1989 the McDonnell Douglas DC-10 aircraft registered N54629 took off from N'Djamena International Airport at 13:13. Forty six minutes later, at its cruising altitude of 30,000 ft, an explosion caused UTA Flight 772 to break up over the Sahara Desert near the towns of Bilma and Ténéré in Niger, West Africa.[1]

UN Security Council Resolution 748, adopted unanimously on 31 March 1992, introduced mandatory sanctions calling upon Libya to comply with requests to hand over two Libyan suspects in the destruction of Pan Am Flight 103 over Lockerbie on 21 December 1988, and to cooperate with the investigation of the sabotage of UTA Flight 772 over Chad and Niger on 19 September 1989.[3] 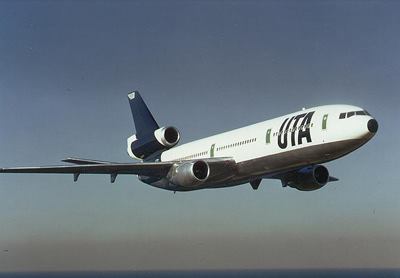 UTA Flight 772, from Congo Brazzaville to Paris via N'Djamena in Chad, exploded over Niger

Among the killed passengers was Bonnie Pugh, wife of the American ambassador to Chad at the time, Robert L. Pugh.

Chadian Planning Minister Mahamat Soumahila was also aboard, bound for the annual meeting of the International Monetary Fund in Washington. 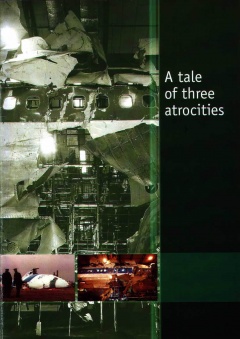 In 2009, Charles Norrie published a booklet entitled "A tale of three atrocities" in which he paid a tribute to one of the British victims:

My brother Tony was murdered in a Libyan terrorist attack. He was travelling on UTA Flight 772 between N'Djamena in Chad, where he worked in oil field development, and Paris. When he died, he was returning to the UK via Paris to participate in a gliding competition in Scotland. He lived for gliding and loved the air. He had even represented Guernsey at the 1982 World Gliding Championships. The latter seems an odd achievement because I didn't know he had a connection to the place. So it was a tragic irony that he should meet his death in the beastly destruction of an aircraft. I like to think he was sitting back with a gin and tonic in his hand just before he died. Perhaps he was thinking of pleasant air adventures ahead.
My brother was a long-standing member of Lasham Gliding Club, near Alton in Hampshire. His life was centred on the airfield and close friends living in and near the town who were devoted to the sport. He repaid that friendship in his will, leaving them sufficient money to build a workshop at the airfield. The Club has named the workshop in his memory. They also established a "Tony Norrie" award for the best two-seater flight of the year. These people, to my mind, constituted his "gliding family". To them, I had to bring the sad news of his tragic death. My brother and I were never close. However, when he died, I found he had made me his executor. I asked my mother "Why?". "Because you always have the last word in any argument," she said enigmatically.
I metaphorically extended the remit of executor to inquire about the circumstances of any tragedy that could have a bearing on his death. So, I settled down to read myself into Lockerbie. Like UTA, Lockerbie was to be attributed to Libya.
With that thought in mind, I offer these thoughts on Lockerbie twenty years later. The conclusions of my research are shocking. They are also wildly different from anything previously published. Given what Libya did to my brother, my stance may surprise you.[5]

An investigation commission of the ICAO[6] determined that a bomb placed in a container in location 13-R in the forward cargo hold caused the destruction of the aircraft. The commission suggested that the most plausible hypothesis was for the bomb to have been inside the baggage loaded at Brazzaville airport. Initial speculation over which groups might have been responsible for destroying UTA Flight 772 centered upon the Palestinian Islamic Jihad, who were quick to claim responsibility for the attack, and the Secret Chadian Resistance rebel group, which opposed Chadian president Hissen Habré.[7] Five years previously, on 10 March 1984, a bomb destroyed another UTA aircraft from Brazzaville shortly after the DC-8 had landed at N'Djamena airport. There were no fatalities on that occasion and those responsible were never identified.[8]

Wreckage of the aircraft was sent to France for forensic examination, where traces of the explosive PETN were found in the forward cargo hold. Pieces of a dark grey Samsonite suitcase covered in a layer of PETN convinced the investigators that this was the source of the explosion. It had been loaded in Brazzaville.

On 19 September 1989, 170 people were killed when UTA Flight 772 was destroyed by a suitcase bomb planted by Libyan agents. Despite being one of the deadliest terror attacks in history, outside France it remained overshadowed by the Lockerbie bombing that had taken place ten months earlier. Both attacks were carried out at the instruction of Libya’s dictator Muammar Gaddafi, but while ‘Lockerbie’ became synonymous with international terrorism, UTA 772 became the ‘forgotten flight’.

As a lawyer, Stuart H. Newberger represented the families of the seven Americans killed in the UTA 772 attack. Now he tells the story of the ‘forgotten flight’ for the first time. Newberger pieces together the events leading up to the crime in extraordinary detail, reveals how French investigators cracked the case and takes us inside the behind-the-scenes diplomatic talks with the Libyan government.[9] A real-life legal thriller and a deep examination of the attacks that shaped our view of modern terrorism, "The Forgotten Flight" is a fast-paced drama with important implications for how we achieve justice for international crimes in an increasingly globalized world.[10]

According to Lockerbie campaigner and former police officer Barry Walker:

"In the 'official' version of events, the UTA 772 case demonstrates a pattern of Libyan behaviour. For some who dispute Libyan responsibility for Lockerbie there is also a suspicion that evidence in the UTA 772 case was manipulated to implicate Libya, perhaps even to ensure French support, as a permanent member of the UN Security Council, for sanctions.

"There are similarities between the UTA 772 case and Lockerbie as well as significant differences, not only in the way the investigation was conducted but in the different method by which UTA 772 was attacked. The evidence in the UTA 772 case against the six Libyan officials eventually convicted is essentially circumstantial and sometimes quite flimsy. There appears to be stronger evidence against other Libyan officials and a Congolese who were not charged."[11]

In Manipulations Africaines (African Manipulations), published in February 2001, French investigative journalist Pierre Péan alleged that the evidence pointed to Iran and Syria (acting through the Hezbollah movement), but that due to political context (notably the Gulf War), France and the United States tried to put the blame on Libya. He accused Juge Jean-Louis Bruguière of deliberately neglecting proof of Lebanon, Syria and Iran being involved to pursue only the Libyan trail. He also accused Thomas Thurman, an FBI political operative, of fabricating evidence against Libya in the sabotage of both Pan Am Flight 103 and UTA Flight 772:

"It is striking to note the similarity of the 'scientific' evidence discovered by the FBI's Tom Thurman in both the Lockerbie and UTA cases. Of the tens of thousands of pieces of debris collected at each disaster site, one lone piece of printed circuit was found and, miracle of miracles, in each case the fragment bore markings that allowed for positive identification: MEBO in the Lockerbie case and TY in the case of UTA Flight 772. Despite the common findings of the DCPJ, the DST and the Prefecture of Police crime laboratory, Juge Bruguière chose to believe Thurman, the expert in fabricating evidence."[12] 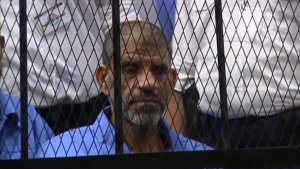 The French investigators led by Juge Jean-Louis Bruguière obtained a confession from one of the alleged terrorists, Bernard Yanga, a Congolese opposition figure, who had helped recruit a fellow dissident to smuggle the bomb onto the aircraft.[13] This confession led to charges being brought against six Libyans. Juge Bruguière identified them, as follows:

In 1999, the six Libyans were put on trial in the Paris Assize Court for the bombing of UTA Flight 772. Because Gaddafi would not allow their extradition to France, Abdullah al-Senussi and the other five Libyans were tried and convicted in absentia, and sentenced to life imprisonment.

The motive usually attributed to Libya for the UTA Flight 772 bombing is that of revenge against the French for supporting Chad against the expansionist projects of Libya toward Chad. Libya was understood to have considered this French support as "neo-colonialist".[14]

The Chadian–Libyan conflict (1978–1987) ended in disaster for Libya following the defeat at the Battle of Maaten al-Sarra in the 1987 Toyota War. Muammar Gaddafi was forced to accede to a ceasefire ending his dreams of African and Arab dominance. Gaddafi blamed the defeat on French and U.S. "aggression against Libya".[15]

The Paris court awarded the families of the UTA victims sums ranging from €3,000 to €30,000 depending on their relationship to the dead. Not content with this award, the French relatives' group "Les Familles du DC10 d'UTA"[16] signed an agreement on 9 January 2004 with the Gaddafi International Foundation for Charity Associations accepting a compensation payment of $170 million United States dollars, or $1 million for each of the 170 UTA victims. By 2007-05, it was reported that 95% of this compensation money had been distributed.[17] However, the families of the seven American victims refused to accept their $1 million USD awards and pursued the Libyan government through a federal court in Washington DC. On 19 September 2006, the court was asked to rule that the Libyan government and six of its agents were guilty of the 19 September 1989 destruction of UTA Flight 772. Damages of more than $2 billion USD were claimed for the loss of life and the destruction of the DC-10 jet.[18]

In April 2007, D.C. District Judge Henry H. Kennedy found Libya directly responsible for the bombing and presided over a three day bench trial from 13 August 2007 to 15 August 2007. On 15 January 2008, Judge Kennedy issued an order awarding $6 billion USD in damages to the families and owners of the airliner.[19][20][21] Libya has appealed this decision.

In October 2008 Libya paid $1.5 billion into a fund which will be used to compensate relatives of the

As a result, U.S. President George W Bush signed an executive order restoring the Libyan government's immunity from terror-related lawsuits and dismissing all of the pending compensation cases in the U.S. [22]

On 18 July 2011, former Libyan foreign minister Abdel Rahman Shalgham, who had defected from the Libyan government in March at the beginning of what would become the 2011 Libyan civil war, told al-Hayat that the Libyan government was responsible for the bombing of UTA Flight 772. He stated:

"The Libyan security services blew up the plane, believing that opposition leader Mohammed al-Mugarief was on board, but after the explosion it was found that he was not on the plane." He also claimed that "The Lockerbie operation was more complex ... the role of states and organisations has been discussed, and while the Libyan services were implicated, I do not think it was a purely Libyan operation.[23] 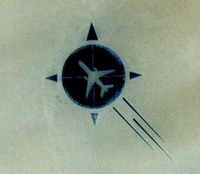 Where UTA Flight 772 fell in the Sahara Desert, the families of the victims built a lasting and visually striking memorial to the dead in 2007. A life-size silhouette of the aircraft lies inside a dark stone circle surrounded by 170 broken mirrors, each one representing someone who died. Jutting out at the northern point, like a sundial, stands the right wing of the DC-10 aircraft.[24]

The memorial, created in the desert by Les Familles de l’Attentat du DC-10 d’UTA, was constructed of black rock in the shape of the DC10 airplane inside a compass.[25][26]

The memorial is visible in satellite imagery on Google Earth.[27]