George Walker Bush, the 43rd President of the USA, is not to be confused with his father, George H. W. Bush, CIA operative and the 41st U.S. president. He is brother of Jeb Bush, former Governor of Florida. Investigative journalist Russ Baker found it so remarkable that some so lacking could reach such high office, that he decided to write a book about how he got the job - this became the highly recommended Family of Secrets, which looks in detail at Bush the elder. 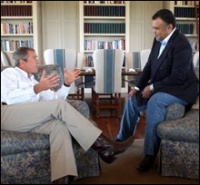 George Bush Jr. is son of a lifelong intelligence operative, George (H. W.) Bush Sr. He was sent to Yale university where (like his father and grandfather) he became a member of the Skull and Bones society. He went to Harvard Business school, but showed little aptitude for business. This did not stop him following the pattern set by his father, of using business as a cover for other activities.[1] 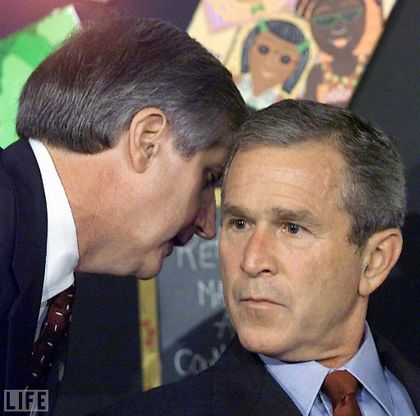 On a visit to the Emma E. Booker Elementary School in Sarasota, Florida.[2] A handler informs George Bush that a second plane had crashed into the World Trade Center and that America is under attack.[3] He continues the reading lesson with the children.[4][5][6] It is unthinkable that security protocol would not dictate that in a situation with several hijacked airplanes and his seaside location known in advance, he as the president needs to be evacuated; but nothing of the sort happens.

At the time of the attacks, US President George W. Bush was reading a story to a primary class in Florida, an activity he didn't interrupt when told that a plane had crashed into the World Trade Center, purportedly because he didn't want to upset the children. One commentator remarked that [7] "he does not even turns his head, it is obvious he knew what was up, if he were really surprised his first reaction would have been to look in the eyes of the person whispering to him".[8] Mark Gorton suggests that 9/11 was planned by George Bush senior, which would suggest that George Bush Jr. was deliberately put out of harm's way, and that he had been instructed to obey orders.

The US Secret Service also apparently saw no problem with leaving him where he was, strongly suggesting that they did not perceive the events of that day as a threat.

Bush later engaged in predictable posturing about "terrorism", Bin Laden and "terrorism". His popularity, which was extremely low before the 9/11 event, rose dramatically in its aftermath, his inaction notwithstanding - a demonstration of the effectiveness of the strategy of tension.

“Everyone must choose. You're either with the civilized world or you're with the terrorists.”
George W. Bush (4 April 2002)  [9]

Bush was found guilty of war crimes, including the authorisation of torture, which is illegal under the United Nations Convention Against Torture which the USA has ratified. Former UN Special Rapporteur on Torture, Manfred Nowak has given expert opinion that Bush has no immunity as a former head of state. US attorney Vincent Bugliosi, forcefully argued in his 2008 book, The Prosecution of George W. Bush for Murder that since Bush intentionally misled Congress and the US population about the reasons for invading Iraq, under the felony-murder rule the deaths of over 4,000 American soldiers and 100,000 Iraqi civilians amount at the very least to second-degree murder. Bugliosi has argued for Bush's impeachment and offered to work with any US State's Attorney General interested in pursuing the prosecution.

Bush was tried in absentia and convicted by the Kuala Lumpur War Crimes Commission both for crimes against peace and conspiracy to commit war crimes, specifically torture, after the Iraq War and torture carried out at Abu Ghraib and Guantanamo Bay. No sentence was pronounced, but the tribunal referred their findings to the chief prosecutor at the International Court of Justice in the Hague.[10]

On October 4, 2005, President Bush asked Congress "to consider giving him powers to use the military to enforce quarantines in case of an avian influenza epidemic."

"'If we had an outbreak somewhere in the United States, do we not then quarantine that part of the country? And how do you, then, enforce a quarantine?' Bush asked at a news conference. 'It's one thing to shut down airplanes. It's another thing to prevent people from coming in to get exposed to the avian flu. And who best to be able to effect a quarantine?' Bush added. 'One option is the use of a military that's able to plan and move. So that's why I put it on the table. I think it's an important debate for Congress to have.'" [11]

In May 2022, he made "one the greatest Freudian slips of all time" when he referred to “the decision of one man to launch a wholly unjustified and brutal invasion of Iraq. I mean of Ukraine.” [13]