Henry Kissinger was initially appointed to head the commission[1] but resigned a few weeks later to avoid disclosing the clients of his private consulting business.[4] Former U.S. Senator George J. Mitchell was originally appointed as the vice-chairman, but he stepped down on December 10, 2002, not wanting to sever ties to his law firm.[5] On December 15, 2002, Bush appointed former New Jersey governor Tom Kean to head the commission.[6] Lee H. Hamilton was vice chairman. 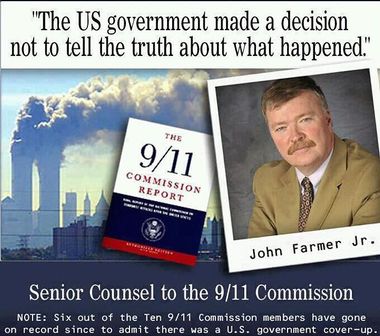 Commission executive director Philip Zelikow and his long time associate Ernest May started work on a detailed outline of the final report - containing chapter headings, subheadings, and sub-subheadings - in March 2003. Zelikow showed it to the chair and vice-chair and they approved it, but all three decided that - to prevent accusation of the commission being a foregone conclusion - it should be kept secret from the commission’s staff. When the commission members are given copies, over a year later, they were alarmed. Some circulated a parody entitled “The Warren Commission Report — Preemptive Outline” which has a chapter heading “Single Bullet: We Haven’t Seen the Evidence Yet. But Really. We’re Sure.”[7]

The Washington Post reported in 2006 that in a secret meeting at the end of its tenure in Summer 2004 to consider the misleading statements made by NORAD to the commission, "the commission reportedly debated referring the matter to the US Justice Department for criminal investigation, according to several commission sources. Staff members and some commissioners thought that e-mails and other evidence provided enough probable cause to believe that military and aviation officials violated the law by making false statements to Congress and to the commission... "We to this day don't know why NORAD [the North American Aerospace Command] told us what they told us," said Thomas H. Kean, "It was just so far from the truth. . . . It's one of those loose ends that never got tied."[8]

Max Cleland, former U.S. Senator resigned from the commission in December 2003, stating that "the White House has played cover-up."[10]

When asked about the commission by WeAreChangeLA, Bob Kerrey stated that 9/11 was "a thirty year conspiracy", perhaps an allusion to "the cabal".[11]

John Farmer - "There was an agreement not to tell the truth"

The Senior Counsel to the 9/11 Commission, John Farmer – who led the 9/11 staff’s inquiry – said “At some level of the government, at some point in time... there was an agreement not to tell the truth about what happened“.[12] He also said “I was shocked at how different the truth was from the way it was described... The tapes told a radically different story from what had been told to us and the public for two years... This is not spin. This is not true.”[13]

The chairman & vice-chairman - "Set up to fail... obstructed our investigation"

Thomas Kean and Lee Hamilton, have written that the government established the Commission in a way that ensured that it would fail. In their book Without Precedent: The Inside Story of the 9/11 Commission wrote that "there were all kinds of reasons we thought we were set up to fail."[14] In a 2008 joint article in the New York Times, "Stonewalled by the CIA" they complain about the CIA's failure to answer their questions for evidence - focusing particularly on the videos of torture sessions which the CIA reportedly destroyed. They write: "Those who knew about those videotapes — and did not tell us about them — obstructed our investigation".[15]

The report's conclusions have been widely dismissed by serious investigators. The commission's original report failed to even mention WTC7. When asked whether this omission was deliberate, and if so, why, the chairman said he "couldn't remember". The commission wrote that "the U.S. government has not been able to determine the origin of the money used for the 9/11 attacks. Ultimately the question is of little practical significance."[16] [Citation Needed]