These were the 19 men who hijacked 4 planes on September 11th, 2001. The first hijackers to arrive in the United States were Khalid al-Mihdhar and Nawaf al-Hazmi, who settled in the San Diego area in January 2000. They were followed by three hijacker-pilots, Mohamed Atta, Marwan al-Shehhi and Ziad Jarrah mid-2000 to undertake flight training in south Florida. The fourth hijacker-pilot, Hani Hanjour, arrived in San Diego in December 2000. The rest of the "muscle hijackers" arrived in early and mid-2001. Zacharias Moussoui has been termed "the 20th hijacker" a possible additional member of the group of September 11 attacks of 2001.[1]

The BBC reported on 23 September 2001 that 4 of the hijackers were alive and well:

"A five-year-old story from our archive has been the subject of some recent editorial discussion here. The story, written in the immediate aftermath of the 9/11 attacks, was about confusion at the time surrounding the names and identities of some of the hijackers. This confusion was widely reported and was also acknowledged by the FBI.

"The confusion over names and identities we reported back in 2001 may have arisen because these were common Arabic and Islamic names. In an effort to make this clearer, we have made one small change to the original story. Under the FBI picture of Waleed al-Shehri we have added the words 'A man called Waleed Al Shehri...' to make it as clear as possible that there was confusion over the identity. The rest of the story remains as it was in the archive as a record of the situation at the time.

"It concluded by quoting the official position from the FBI:

'The FBI is confident that it has positively identified the nineteen hijackers responsible for the 9/11 terrorist attacks'."[3]

Despite the fact that none of the 19 hijackers were Iranian citizens (fifteen were Saudi Arabians, two were from the United Arab Emirates and one each from Egypt and Lebanon), in December 2011 US Judge George Daniels found Iran guilty of the attack,[4] and ordered Iran to pay over $10 billion in March 2016.[5] 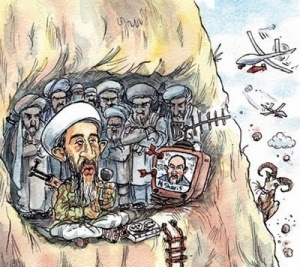 As of March 2015, no evidence had been presented that any of the 19 men boarded the planes.[6] Afghanistan's Deputy prime minister Haji Abdul Kabir - the third most powerful figure in the ruling Taliban regime - stated that the Taliban would require evidence that Bin Laden was behind the September 11 terrorist attacks in the US, but added: "we would be ready to hand him over to a third country". US President George W. Bush dismissed the offer, stating "There's no need to discuss innocence or guilt. We know he's guilty".[7]

The 19 Hijackers story has been termed the "myth of the 19 Arab Oswalds",[8] referring to another deep state operation and cover-up, the JFK Assassination, which to this day some still believe was carried out by "lone nut" Lee Harvey Oswald. Similarly, the main evidence for the "19 hijackers" theory is its assertion by the US authorities, which is of minimal value once their integrity is in doubt. The main 9-11 article provides a lot of such evidence.

Michael Springmann, an official in the visa section of the US consulate in Jeddah, has testified that Jay Freres instructed him to circumvent standard operative procedure in order to issue visas to many of the 19 alleged hijackers.[9] Freres was later reported killed by a lightning strike while walking alone.[10]

Three of the hijackers were reportedly trained in flying small aircraft at Huffman Aviation in Venice, Florida, owned by Wallace J. Hilliard and Rudi Dekkers, both of whom have been accused of drug trafficking.[11]