Abu Agila Mas'ud (aka Mohammed Abouagela Masud, the Technician) was described in a Sunday Express article of 3 February 2013 as the mystery "third man" in the 1988 Lockerbie bombing conspiracy, for which Abdelbaset al-Megrahi was convicted in 2001, and Lamin Khalifah Fhimah was acquitted. A series of secret court hearings in Malta, requested by Scottish prosecutors and held in September 2012 behind closed doors, were focused on gathering evidence about other co-conspirators. The most likely candidate was reported to be Mas'ud, who worked with Megrahi and Fhimah in Malta - where prosecutors said the bomb that brought down Pan Am Flight 103 was planted at Luqa Airport. One Lockerbie expert said:

"It's possible they are looking at Mas'ud, who allegedly arrived in Malta with Megrahi and was said to have been with him when he flew out of the country on the day of the bombing. He was also accused of plotting with Megrahi to mount an operation in Africa. I don't think the police ever found him."

Mas'ud and several of the other suspects were first linked to the Lockerbie case by controversial CIA informant Majid Giaka. The junior Libyan intelligence officer, who was on secondment at Libyan Arab Airlines (LAA), claimed he saw Mas'ud arriving at the airport in Malta with Megrahi in December 1988. He alleged they met Fhimah and collected a suitcase from baggage reclaim resembling the Samonsite case which contained the bomb.[1]

Shoring up the Malta connection

Justice for Megrahi campaign member Professor Robert Black, a lawyer who was the architect of the original Lockerbie trial in the Netherlands, said:

"It looks like the Crown Office is trying to shore up the Malta connection, which is pretty weak."

"The investigation into the involvement of others with Megrahi in the Lockerbie bombing remains open and Dumfries and Galloway Constabulary continues to work with Crown Office and US authorities to pursue available lines of inquiry."[2]

Filmmaker Ken Dornstein set out in 2011 on a quest to identify a number of Libyan suspects who could have been responsible for the death of his elder brother David in the 1988 Lockerbie bombing. The first step was getting former SIO Stuart Henderson to provide him with a list of eight to ten names of individuals from the files of the original investigation who seemed to play a role in the bombing but who had never been indicted.

"My idea was a pretty simple idea - to go with a list of names, start knocking on doors and find out who these persons were and would any of them tell me the truth," Dornstein said.

Dornstein quickly found out that many of those named in the investigation were dead. Some had been killed before the revolution that led to the overthrow of Muammar Gaddafi. Some were killed during the revolution while others appeared to have been killed on orders from Gaddafi himself.

"By my count there were three people left alive who I believe played a role in it and who I was focused on trying to identify and find," Dornstein said.

Of those the most intriguing was a mysterious figure who Dornstein said had been travelling with Abdelbaset al-Megrahi, the only person convicted in the attack, including on the day of the bombing.

"I thought if I could figure out who that person was, potentially that would make sense of the whole case." Dornstein said.

Dornstein was eventually able to connect a passport number (835004) of the suspected explosives expert to a matching passport number linked by East German secret police to the bombing of a disco in Berlin a few years before Lockerbie. For a long time Dornstein, and investigators, weren't sure that the individual - a Libyan named Abu Agila Mas'ud - was even real.

"This is a guy who had essentially been a ghost. There was no photo of him. The FBI and Scottish police - nobody had a photo of him. There were suspicions that he didn't even exist," Dornstein said. "The Libyans always denied his existence."

Dornstein was able to track down Mas'ud to a jail in Libya where he says he was serving a 10-plus year sentence on bomb-making charges for booby-trapping the cars of those opposed to Gaddafi.

"I wish I had come face to face to him," said Dornstein, who only dealt with Mas'ud indirectly. "I would have liked to have been there for the moment when someone tapped him on the shoulder and said 'Hey, here's this incident that happened all these years ago and there's someone in America - someone's brother - who said you connected the wires that maybe blew up that plane and killed some 270 people.' I would have loved to have been there to see his reaction and hear his answer."

Dornstein ultimately turned his search for the Pan Am Flight 103 bombers into a three-part PBS Frontline documentary film "My Brother's Bomber".[3]

In the film, shown on BBC Four on 2 November 2015, Dornstein revealed that Libyan double agent Musbah Eter had supplied him with a photograph of the elusive Mas'ud. Dornstein matched the photo of Mas'ud to the man he'd spotted in the back seat of the car sent to Tripoli airport to meet Abdelbaset al-Megrahi on 20 August 2009, upon Megrahi's compassionate release from prison in Scotland. Also pictured in the car on that occasion was Abdullah al-Senussi. Without any corroborating evidence, Eter told Dornstein that Mas'ud had actually admitted to the 1986 La Belle discotheque bombing in Berlin, to the 1988 Lockerbie bombing and to the sabotage in 1989 of UTA Flight 772. Interviewed in the film by Dornstein, Edwin Bollier said although he recognised the dark-skinned Mas'ud from the photograph he didn't know his name.[4]

Close to being indicted

On 18 October 2015, the Scotland on Sunday reported that Mas'ud had been close to being indicted in 1991:

One of the new suspects in the Lockerbie bombing was “very close” to being indicted at the original trial along with Abdelbaset al-Megrahi, according to the former FBI agent who headed up the US investigation. Richard Marquise said prosecutors decided against the move to pursue Abu Agila Mas’ud because they didn’t believe the case was strong enough. Scottish prosecutors last week announced that are seeking permission to interview two new suspects, later confirmed as Mas’ud and Libya’s ex-intelligence chief Abdullah al-Senussi. Both are currently incarcerated in the strife-torn North African state with Senussi facing the death sentence and Mas’ud jailed for ten years.

Marquise is a former FBI agent and was head of the US government’s investigation of the bombing of Pan Am Flight 103 which killed 270 people in 1988. He said both men were on the radar in the original investigation.

“Senussi was Gaddafi’s intelligence chief as I recall,” he said. “We had him as a possible suspect only because of his rank in the government and what he did there. We didn’t have any evidence against him, but he was someone we were well aware of and we had heard stories that he was involved deeply in terrorist plots, but nothing specific in regard to Lockerbie. Mas’ud on the other hand, he was very close to being indicted back when Megrahi was. We were aware of his travels with Megrahi in and out of Malta, a number of times. The last time that we were aware of was the morning that the bomb bag left. He and Megrahi were on the same plane. So we were aware of him. He was, we believed he was, a technician of some kind – a bomb builder. However, there was no real evidence against him other than that he was a bomb technician and he was on a flight with Megrahi. So prosecutors decided back in 1991 not to indict him. I think the prosecutors erred on the side of caution to say there’s no real concrete evidence. Nobody told us, well he came here and armed the bomb or put the timer together. There’s no real proof of that.”[5]

However, Middle East expert Jason Pack said the idea of Lockerbie investigators going to Libya to interrogate suspects in its current state of turmoil was an absurdity. Even if investigators did manage to gain access to the prisoners, Lockerbie campaigner Morag Kerr doubted that anything would be achieved:

"Any case against Abdullah al-Senussi and Mas’ud would be based on the same essential evidence that was used to convict Megrahi in the first place. But that evidence has been systematically dismantled and discredited over a number of years. If that were to be tested in court then against new suspects, I’m afraid I would be very doubtful it would even get to court."[6] 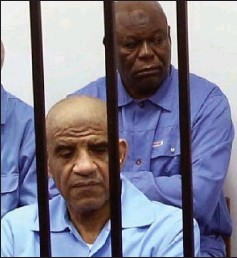