Porter Goss worked in the now infamous JM/WAVE station in Miami under Ted Shackley, and was very probably a member of Operation 40, although he denies it, though admitting that he has been a long time CIA operative. Although opposing an inquiry into 9/11, Goss agreed to lead the first inquiry into 9/11. He was pressured to resign as Director of the CIA in 2006, less than a month after the 'Cocaine One' drug bust in Mexico revealed a CIA-linked plane laden with 5½ tonnes of cocaine.[1]

Goss graduated from Yale University with a degree in Greek classics in 1960, where he joined Book and Snake and Psi Upsilon. He then joined the Army Reserve Officers Training (ROTC) program. From there, to use his own words, he "gravitated to the CIA" in 1961.[2]

Goss worked in the JM/WAVE station in Miami, but Daniel Hopsicker cites Associated Press that "Porter J. Goss has disclosed precious few details of his CIA employment from roughly 1960 to 1971".[3] Asked about his connections, Goss once stated "I knew [station chief] Shackley but I was so junior compared to those people... a basic Boy Scout at that point."[2] Goss has claimed that he worked primarily as a photo-interpreter, and that he never went to Cuba himself. Recently a colleague Vince Cannistraro claimed that he was involved in paramilitary activity against the Cubans: "I know he was involved in the Bay of Pigs operation, he worked out of Miami with Cuban exiles... and took part in... attempts to overthrow Castro".[2] Goss worked for the CIA’s Directorate of Operations as a covert operative in Haiti, the Dominican Republic, Mexico, and Western Europe.[4]

John Simkin reports that Porter J. Goss was a member of CIA Assassination squad, Operation 40, and indeed a January 1963 photo shows someone generally agreed to be Goss with his arm around David Sanchez Moralez at a table with Barry Seal and many other members of Operation 40.[5] Goss however claims that the photo is not him, and rather improbably for someone with his connections, that he had "never heard of Operation 40".

On the morning of 9/11, Porter Goss (Chairman of the House Permanent Select Committee on Intelligence) was with Bob Graham (Chairman of the Senate Select Committee on Intelligence) meeting with the Director General of the ISI, General Mahmud Ahmed.[4] On the morning of 9-11 he was asked about the use of a plane in a terrorist attack when what sounds like an explosion is heard, followed by a plane.[6]

After initially opposing calls for an inquiry into the events of 9/11, Porter Goss later agreed to lead (with Bob Graham) the first inquiry into 9/11. Lest there be any misunderstanding as to its potential function, Goss clarified his determination not to punish malfeasance within the US Government, stating "This is not a who-shall-we-hang type of investigation. It is about where are the gaps in America's defense and what do we do about it type of investigation."[7]

George W Bush said about Goss: "He knows his CIA inside and out. He's the right man to lead this important agency at this critical moment in our nation's history" in a video clip run by CNN, August 10, 2004. On April 21, 2005, Bush made him Director of Central Intelligence. He became DCI on September 24, 2004, and announced to the CIA staff later that year their job was “to support the Bush administration and its policies in our work”. Some senior CIA figures who opposed the Iraq War resigned, included Michael Scheuer, former head of Bin Laden Station. Vince Cannistraro, a former head of the CIA’s counter-terrorist centre, commented: “It can only be interpreted one way – there will be no more dissenting opinions.”

Under Goss' directorship, 92 tapes of torture carried out by the CIA on Abu Zubaydah and others were destroyed.[8] A FOIA request by the ACLU turned up a number of "E-mails show CIA chief [Porter Goss] 'agreed to destroying' of torture". The emails themselves do not appear to have been published on the WWW.[9][10]

Under pressure to resign as Director of the CIA on 5 May 2006,[11] he told reporters that the reason why was "just one of those mysteries".[1] The Los Angeles Times claimed that "Goss was pushed out by Negroponte after clashes between them over Goss' management style, as well as his reluctance to surrender CIA personnel and resources to new organisations set up to combat terrorism and weapons proliferation." Another idea is that his resignation was linked to the investigation of Kyle Foggo, whom he appointed as CIA Executive Director, and who himself resigned 3 days later, eventually admitting multi-million dollar fraud.[2] Daniel Hopsicker suggests that Goss was forced out because of the 2006 Mexico DC-9 drug bust, which found 5½ tonnes of cocaine being flown to USA aboard a CIA-owned plane.[1]

An appointment by Porter Goss 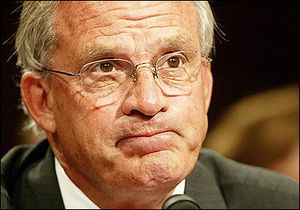