The Belt and Road Initiative (BRI) is a development strategy adopted by the Chinese government involving infrastructure development and investments in countries in Europe, Asia and Africa. "Belt" refers to the overland routes for road and rail transportation, called "the Silk Road Economic Belt"; whereas "road" refers to the sea routes, or the 21st Century Maritime Silk Road. Until 2016, the initiative was officially known in English as the One Belt and One Road initiative but the official name was changed as the Chinese government considered the emphasis on the word "one" prone to misinterpretation.[1]

The Chinese government calls the BRI "a bid to enhance regional connectivity and embrace a brighter future".[2] 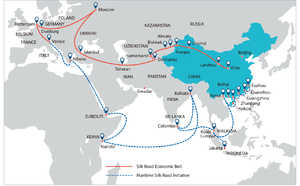