In 1974, David Walker, a former SAS officer, was commissioned to examine how an insurance company, Hogg Robinson, might exploit the security market. He collaborated with Julian Radcliffe, managing director of a political-risk insurance company in the same group.[1]

Authors Jonathan Bloch and Patrick Fitzgerald state that the company was the brainchild of Radcliffe, "A London insurance broker, who became a director after the wholesale resignation of the board of Control Risks' previous incarnation, the A1 Insurance Agency.[2]

According to Geraghty, the new Control Risks subsidiary started out as a shelf company acquired by Tim Royle. Walker was the firm's managing director and sole employee. During this time he travelled to Rome and Milan to advise on kidnap cases, established negotiations procedures and recruited two fellow SAS veterans, Arish Turle and Simon Adams-Dale. Walker left to join KMS in 1975, by which time Radcliffe had approached Lloyd's underwriters, offering kidnap and ransom ('K&R') insurance cover alongside a service to mitigate the risk.[3]

In 1977, Turle and Adams-Dale were arrested in Colombia while arranging the release of US businessman George Curtis for a ransom of $400,000. They used their 10 weeks' imprisonment to rewrite Control Risks' Standard Operational Procedures.[5]

In 1979, Control Risks negotiated the release of two British officials from Lloyds Bank International after they had been kidnapped by guerrillas in El Salvador.[6]

According to an early version of the company's website, "five members of the management team negotiated a management buy out of the company" in 1980-81, "establishing Control Risks as an independent, employee majority-owned private company, able to give impartial and objective advice to the advantage of our clients."[7]

Bloch and Fitzgerald's British Intelligence Covert Action stated that at the time of publication (1983), Control Risks operated from offices in Victoria, with a staff of 60 and a turnover of £1 million. Managing director Arish Turle was joined on the board by two other ex-SAS officers as well as former Metropolitan Police Commissioner Sir Robert Mark, General Sir Frank King, Peter Goss and Major-General Richard Clutterbuck. Staff members included Peter Janke and Richard Sims, both of whom, like Clutterbuck, had links to the Institute for the Study of Conflict.[8]

Control Risks established an investigative division in 1995. By 2003 the company has 375 employees, with offices in 17 countries. In July 2003 a project office was opened in Iraq and October 2003 an office opened in China.[9]

“Control Risks would continue the ISC's previous assistance to South Africa: in 1986, it set up a syndicate for British companies trading with South Africa. For a price of £1,500 per place, Control Risks informed the syndicate's members of "the activities of anti-apartheid groups in Europe, their relationship to terrorist groups and their intentions".”
David Teacher [11]

The Intelligence Online newsletter reported that the office was headed by James Blount, with five executives and a planned staff of 80 people:

The company said it would install a communications center designed to see that all staff are accounted for at all times, provide close protection for for people traveling in the country, liase with local forces to ensure customers are aware of the security situation and proffer advice and conduct audits for companies wishing to set up house in the country.[13]

In 2004, a joint venture of Control Risks, Erinys and Olive Security bid for the contract to assist the US Department of Defense Project Management Office that was eventually awarded to Aegis Defence Services. The consortium's bid was disqualified because one of the partners was under investigation for undisclosed reasons at the time.[14] 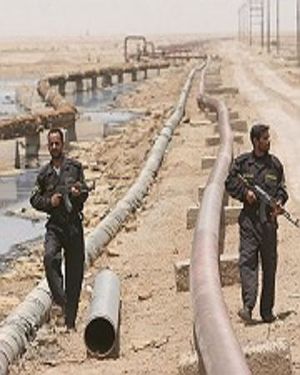 In 2006, Intelligence Online reported that over half of Control Risks' employees in Iraq had threatened to resign following pay cuts after the British and Japanese foreign ministries renewed contracts at lower rates:

The resignation letters of Control Risks Group men, particularly those of Joe Dzioba and Bob Shepherds, who supervised protection of the Japanese embassy in Baghdad, were made public in Internet forums that specialize in private security.[15]

An email that appears to be Joe Dzioba's resignation letter was published at collegeslackers.com.[16]

Bob Shepherd's account in The Circuit suggests that the Japanese embassy contract he worked on was in Afghanistan rather than Iraq.[17]

In 2007, Control Risks' revenues from Iraq dropped by £14.9 million or 24 per cent as western businesses avoided the country:

Chief executive Richard Fenning said: 'It sounds counter-intuitive, but Iraq has got too dangerous for security companies to boom there.'[18]

Earlier, in August 2009 SIPTU regional organiser Christy McQuillan claimed that Control Risks had been operating at Marine Terminals since at least May and that it's presence was an abuse of Irish law:

“It has only been in the last few days that we have been able to confirm the identity of the organisation and it is now incumbent on the Private Security Authority to prosecute Peel Ports and its Irish subsidiary Marine Terminals for flouting Irish law. These people are guarding and patrolling company premises, observing and reporting on SIPTU pickets, challenging people entering the Marine Terminals facilities, escorting people off the premises and providing protection to management personnel and strike breakers passing the pickets.
“All of these are licensable activities yet Control Risks people refuse to identify themselves or even confirm on whose behalf they are acting. Last May management had the gall to bring Control Risks personnel with them into conciliation talks at the Labour Relations Commission and refused to engage in talks without them being present, despite a request by an officer of the state that they leave.[21]

Control Risks is a partner of the Foreign Policy Centre.[22] It has sponsored a number of the Centre's publications, including Keeping Your People Safe: The Legal and Policy Framework for Duty of Care; Doing Business in a Dangerous World, and Healthy Travel, the latter of which was also published in conjunction with the Nuffield Trust and Demos.[23]

Of note here is that Michael Rose, who, although making money out of the chaos and carnage of US/UK policy in Iraq, has publicly spoken about impeaching Tony Blair. [31]