Not to be confused with Cyberwarfare, which is a behaviour of groups such as nation states.

Cyberterrorism, like "terrorism", is a rather loosely defined term which has been criticised by authoritative computer security specialists[1]. It is generally invoked by the commercially-controlled media, often rather implausibly, to suggest that unless governments have strict control over the internet, bad things will happen. The intelligence agencies of US and Israel are generally reckoned to have the greatest expertise in this area. Attribution of such attacks is notoriously difficult and predicted to get even harder,[2] meaning False Flags are a difficult to detect.[3]

The internet, and especially the World Wide Web, has been unprecedentedly successful at allowing free exchange of information. As such, it is seen as a threat by those who have dark secrets to keep. Particularly after the Snowden Affair, the NSA is recognised as possessing the world's most technologically advanced mass surveillance capabilities.

In 2016, the US Department of Homeland Security requested $1 million to develop a public-service campaign designed to increase awareness of online threats. The new initiative will be modeled on the “If You See Something, Say Something” effort rolled out after the Sept. 11 attacks and “will look to raise public and private sector awareness of cybersecurity and to emphasize the importance of cyber awareness and information safekeeping.”[4]

Increasingly, the threat of internet use by "terrorists" is mooted as justification for internet censorship. In 2014, the head of counter-terrorism at Scotland Yard, Assistant Commissioner, Mark Rowley stated "There are some different dynamics today, where we have an increasing number of people who weren't previously on the "terrorism" radar being attracted by an ideology they see on social media". He also claimed that counter-terrorism officers were removing more than 1000 online postings a week.[5] After the November 2015 Paris attacks a proposal was made (and rejected) to ban public WiFi networks.

Although precise information is lacking, intelligence agencies appear to be the most skilled creators of malware, notably the NSA and the Mossad. The USA has been reported as creating Stuxnet[6] of such complexity, combining so many different techniques, that it was immediately suspected to have been government sponsored. Since Stuxnet (2010), related malware has been detected including Duqu (2011) and Regin (November 2014).

JTRIG uses computer viruses to make people's computers unusable, including encrypting of deleting files or emails.[7][8] According to documents released to NBC News by Edward Snowden, JTRIG's role is to "deny, disrupt, degrade and deceive". As well a spreading of viruses, this also includes use of DDOS attacks on chatrooms.[9]

Fear of cyberterrorism is stoked by films as the 2013 "docu-drama" American Blackout, which IMDB introduces with the hyperbole that "Hacking into urban infrastructures isn't science fiction anymore - it's in the news every day." The film is a work of fiction; its only claim of 'documentaryhood' would appear to occasional real quotes, such as one by Richard Andres with which it begins:

“A massive and well-coordinated cyber attack on the electric grid could devastate the economy and cause a large-scale loss of life.”
Richard Andres [11]

In September 2014 Bloomberg reported on a honeypot that two researchers established to investigate the sources of cyberterrorism. They reported that most cyberattacks on it were from US, followed by China, Russia and Netherlands in that order.[12]

Dramatic claims about potential risks of "cyberattacks" are a part of the larger campaign to promote Russophobia.

“The United States and Britain on Monday issued a first-of-its-kind joint warning about Russian cyberattacks against government and private organizations as well as individual homes and offices in both countries, a milestone in the escalating use of cyberweaponry between major powers.”
David D. Kirkpatrick,  Ron Nixon (16 April 2018)  [13] 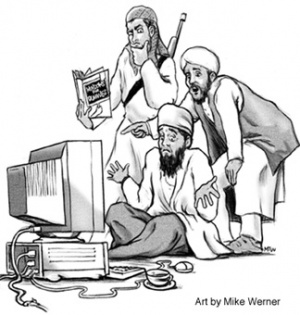