McGeorge "Mac" Bundy was a US deep state actor and United States National Security Advisor. He was President of the Ford Foundation during the coup against the Chilean government in 1973.

Bundy was born into an upper-class Boston family,and throughout his life he was well connected with the American stablishment.

During World War II, Bundy served as an intelligence and propaganda officer in the United States Office of War Information.

In 1949 he was selected for the Council on Foreign Relations, where he worked with a study team on implementation of the Marshall Plan. He was then appointed a professor of government at Harvard University.

Bundy moved into public political life in 1961 when appointed as National Security Advisor in the administration of President John F. Kennedy, where he was one of the chief architects of the United States' escalation of the Vietnam War during the Kennedy and Johnson administrations.

One of Kennedy's "wise men," Bundy played a crucial role in all of the major foreign policy and military decisions of the Kennedy administration and was retained by Lyndon B. Johnson for part of his tenure. Bundy was involved in the Bay of Pigs Invasion, the Cuban Missile Crisis, and the Vietnam War[1]. .

At the first meeting of the National Security Council under Kennedy, Bundy was told the four areas of worry were Cuba, the Congo (which ended in a military coup), Laos (which ended in the biggest covert bombing campaign in history and Vietnam. From 1964 to 1966, he was also chair of the 303 Committee, responsible for coordinating government covert operations.[2]

He was younger brother of William Bundy.

He was an early US member of the Bilderberg. 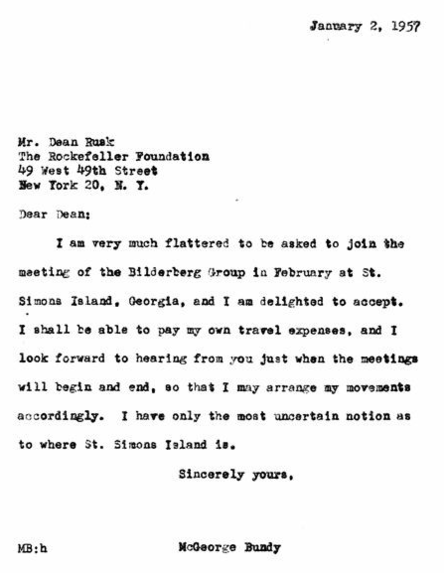 McGeorge Bundy was "delighted to accept" an invitation to the February 1957 Bilderberg.

Fletcher Prouty reports that an investigation into the failure of the Bay of Pigs Invasion by John F. Kennedy determined that the key operational error was a failure to destroy all of the Cuban planes, which allowed them to destroy the supply boats for the invaders. A later investigation ordered by John F. Kennedy traced this to a surprising "miscommunication" by McGeorge Bundy which Prouty was unable to account for, leaving unspoken the possibility that it may have been a deliberate mistake ordered by the CIA "focal point" net­work for which Bundy was a point man.[3]