Michel Barnier is a French Republican politician who has been serving as the EU's chief negotiator for Brexit since December 2016, when the European Commission put him in charge of the Preparation and Conduct of the Negotiations with the United Kingdom under Article 50 of the Treaty on European Union.[1][2].

Michel Barnier was appointed Minister for Agriculture and Fisheries in the French government on 18 June 2007, stepping down on 7 June 2009 upon his election as a Member of the European Parliament (MEP). He served as European Commissioner for Internal Market and Services under the presidency of José Manuel Barroso.[3]

"First the handshakes and generous expressions of goodwill. Not forgetting the obligatory exchange of gifts: a mountaineering book from David Davis to Michel Barnier, a hiking pole from Barnier to Davis. When you’re heading over a cliff, you need all the help you can get. Davis couldn’t have been more charming. The EU was a magnificent institution, the best of the best, and the UK was keen to have the very closest links possible.

"Just as it looked as if Davis might be about to have a change of heart and beg Barnier to let us stay after all, the bell rang for the start of the negotiations. The two teams headed off behind closed doors, with Davis exuding all the confidence of a non-league manager up against Barcelona. Several hours later he emerged for the press conference looking decidedly frazzled. His face was hot and sweaty and his hair was a mess. Lucky he’s still got plenty more to pull out.

"Michel Barnier, though, appeared remarkably unbothered. The talks had been constructive. He had laid out the EU’s demands on the timetable for the talks and Britain had caved in to all of them. Things couldn’t have got off to a better start."[4] 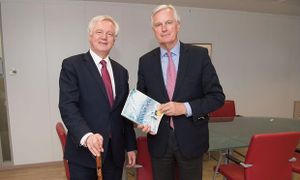