Penny Sue Pritzker is an Jewish-American billionaire businesswoman and member of one of the richest families in the country. Her family early identified and furthered the political career of a young Barack Obama.

In February 2018, Pritzker was elected to succeed Harvey V. Fineberg as chairperson of the Carnegie Endowment for International Peace, taking effect May 2018.[1]

Penny Pritzker is the daughter of Sue (née Sandel) and Donald Pritzker, a member of the Pritzker family of Chicago, a wealthy and influential, but obsessively private[2], business family, worth $15 billion. Her grandfather Abram Nicholas Pritzker started the family fortune, officially through a series of successful leveraged buyout real estate investments in Prohibition-era Chicago. Her father, Donald, helped in establishing the chain of Hyatt Hotels.

The family fortune was held in a vast network of domestic and foreign trusts designed to minimize, if not eliminate, taxes, intended to grow and be handed down from one generation to the next. The funds had generous grandfather clauses (i.e. the tax dodge is not available for new users) that protect assets accumulating in offshore accounts[2].

Dennis Bernstein wrote in 2013: "The Pritzkers are like America’s Rothschilds", noting "they managed to build and pass along … Brobdingnagian wealth from one generation to the next and the next."[3] A series of inheritance lawsuit in the early 2000s split up the fortune somewhat. In the process she became estranged from her two brothers.

Pritzker was 38th United States Secretary of Commerce.[4] She is the founder of PSP Capital Partners and Pritzker Realty Group.[5] She is also co-founder of Artemis Real Estate Partners.[6]

Pritzker continued aiding Obama's political career, helping to finance his 2004 Senate campaign. Early in the Democratic presidential primary, Pritzker's financing helped Obama's candidacy survive when Obama was trailing Hillary Clinton in the polls.[10] Pritzker remained a major fundraiser for Obama during the 2008 Democratic primary and raised millions overall for his White House bid.[9] She was the national finance chair of Obama's 2008 presidential campaign.[11] Pritzker hosted lavish fundraisers as part of her effort to raise money.[12]

Following Obama's victory in the 2008 presidential election, CNN reported that Pritzker was president-elect Obama's top choice for Commerce Secretary.[13] However, Pritzker took herself out of the running.[14][15][16] According to the Chicago Tribune, she withdrew her name from consideration "due to obligations to her family, for whom she was still overseeing billions in assets, and the financial crisis, which was putting some of those assets at risk".[17]

Pritzker was a member of the President's Council on Jobs and Competitiveness. She also served on the President's Economic Recovery Advisory Board. Although she was less active in the 2012 Obama campaign than she had been four years prior,[10] she served as national co-chair of Obama for America 2012.[11] She was also on the board of directors of the Council on Foreign Relations,deciding the direction of US foreign policy[18][19]. 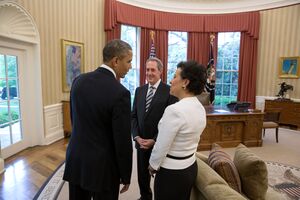 Pritzker with President Barack Obama and Mike Froman in the Oval Office, May 2, 2013

Pritzker was nominated as United States Secretary of Commerce by President Barack Obama on May 2, 2013.[20][21] To avoid conflicts of interest, Pritzker agreed to sell her interest in at least 221 companies and resign from 158 entities, including the Hyatt Board of Directors and the Chicago Board of Education. In November 2017, the International Consortium of Investigative Journalism released the "Paradise Papers," documents related to offshore services and tax havens, and alleged that Pritzker transferred her shares of two of her holdings to her children rather than selling them, as she had indicated on ethics forms.[22][23] Pritzker responded with a statement saying that she had complied with the rules and regulations.[24][25][26][27] Pritzker was sworn in as Secretary on June 26, 2013.[28]

Among Pritzker's priorities was the Trans-Pacific Partnership (TPP), a proposed trade agreement that would have been the "largest regional trade agreement in history".[29] Pritzker supported the TPP as a way to provide market access to U.S. businesses and as a way for the U.S. to set the standards for trade.[29] Leading up the 2016 presidential election, in which both major party candidates openly opposed the TPP, Pritzker and other Obama officials continued to push for the TPP's passage in Congress.[30] Ultimately, Congress failed to pass the TPP bill.[31]

Pritzker named a Digital Economy Board of Advisors, which included tech industry CEOs and academics, to advise on policy. Pritzker also expanded the IP attache program, which helps the tech industry protect their intellectual property abroad.[32] As secretary, Pritzker also created the Commerce Data Advisory Council to identify priorities for the Department of Commerce, a prolific publisher of data intended to allow businesses to plan and innovate.[33] Pritzker served as the lead negotiator for the United States in the E.U.–U.S. Privacy Shield, an agreement governing how companies transfer digital data from Europe to the United States.[34]

Following President Obama's announcement that the United States would move towards normalizing relations with Cuba, Pritzker traveled to Cuba.[35] Although Obama's change in policy did not end the U.S. trade embargo, since ending the embargo required an act of Congress, Pritzker met with Cuban trade ministers and other officials to discuss the changing relationship between the two countries and to lay the groundwork for more economic involvement.[35][36]

Following her tenure as Secretary, Pritzker returned to PSP and the private sector.[31]

Pritzker is involved in public education. She was a member of the Chicago Board of Education and is past chair of the Chicago Public Education Fund.[37] Pritzker was elected to a six-year term on the Harvard Board of Overseers in 2002. In 2018, she was elected to the President and Fellows of Harvard College, which oversees Harvard University.[38] Pritzker was Advisory Board Chair of Skills for America's Future (SAF), a policy initiative of the Aspen Institute.[39] Pritzker is a former chair of the Museum of Contemporary Art, Chicago.[40]

Pritzker and her husband, Bryan Traubert, have their own foundation called the Pritzker Traubert Family Foundation. The foundation focuses on physical activity for young people and increasing economic opportunity in Chicago.[41]

In February 2018, Pritzker was elected to succeed Harvey V. Fineberg as chairperson of the Carnegie Endowment for International Peace, taking effect May 2018.[42]

In March 2020, Pritzer set up the Illinois COVID-19 Response Fund, to assist non-profit organizations during the COVID-19 pandemic, after receiving a call from her brother, Illinois Governor J. B. Pritzker. The siblings announced the creation of the fund with $23 million in start up money on March 24, 2020, six days after Governor Pritzker's request. Pritzker and her husband contributed $1.5 million of the initial sum.[43][44]