Perpetual war is war without end. The tactic is depicted by George Orwell in his dystopian novel, Nineteen Eighty-Four. The US deep state has sought to use the events of September 11, 2001 as a means to promote the concept.[1]

One of the purposes of the events of 9-11 was to promote the "war on terrorism", a perpetual war. On September 20th, 2001, George W. Bush stated that the war “will not end until every terrorist group of global reach has been found, stopped and defeated.” In the same speech, he later said that this war is “a task that does not end.”[1]

The "war on drugs" (also termed the "war on drug users"[3]) is a form of perpetual civil war, a kind of strategy of tension used to facilitate social control and/or social change. The ACLU observed that "over the last 40 years, we have spent trillions of dollars on the failed and ineffective War on Drugs. Drug use has not declined, while millions of people—disproportionately poor people and people of color—have been caged and then branded with criminal records that pose barriers to employment, housing, and stability."[4] This supports the "failure" official opposition narrative which does not address why the so-called "war" is actually ongoing. The casus belli of perpetual war are generally eve more mendacious that those of military, international wars. 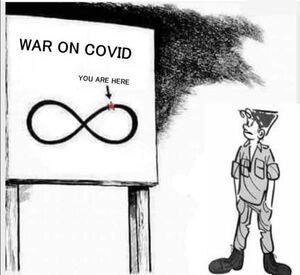