From Wikispooks
(Redirected from JCIT)
Jump to navigation Jump to search

The Jerusalem Conference on International Terrorism (JCIT) was a seminal event in the development of the "war on terror". It was convened by the Jonathan Institute on 2-5 July 1979 at the Hilton Hotel, Jerusalem, Israel. It was attended by about 700 guests, almost all citizens of Israel, UK and US, but with a few other Western Europeans.[1][2] It was followed up in 1984 by the more widely publicised Washington Conference on International Terrorism.

The conference aimed, in the words of its founder, Benjamin Netanyahu, "to focus public attention on the grave threat that international terrorism poses to all democratic societies, to study the real nature of today’s terrorism, and to propose measures for combating and defeating the international terror movements."[3] It was not widely reported upon at the time, and no pictures were readily available on the internet as of 2019.

Tom Secker suggests that the ideology of the current "War on Terror" was conceived at the JCIT,[4] while Tom Griffin termed it in his PhD thesis "a major international forum for the movement against détente".[5]

A Canadian academic[Who?] noted that the conference featured: "pre-emptive attacks on states that are alleged to support “terrorists”; an elaborate intelligence system apparatus; slashed civil liberties, particularly for Palestinians targeted as potential terrorists, including detention without charge, and torture; and propaganda to dehumanize “terrorists” in the eyes of the public. George H. W. Bush and George Shultz, Reagan’s Secretary of State enthusiastically endorsed this concept. Bush Sr. gave a speech at JCIT advocating precisely the type of “war on terror” that his son implemented in 2001."[6]

Brian Crozier, chairman of Le Cercle, spoke at the conference, as did his friends Robert Moss, Alun Gwynne Jones and Gerhard Lowenthal, all of whom have attended Le Cercle. Launching a "war on terror" is a close fit with other known activities of the group such as interfering in party politics, setting up "anti-communist" groups and brokering weapons deals. Many Cercle members set up groups to carry out "terrorism research".

In 1981, the Jonathan Institute published the speeches in a book, International Terrorism: Challenge and Response, edited by Netanyahu.[7][8]

Opening Session: The Face of Terrorism

Third Session: The Threat Posed by Terrorism to Democratic Societies

Fifth Session: Terrorism and the Media 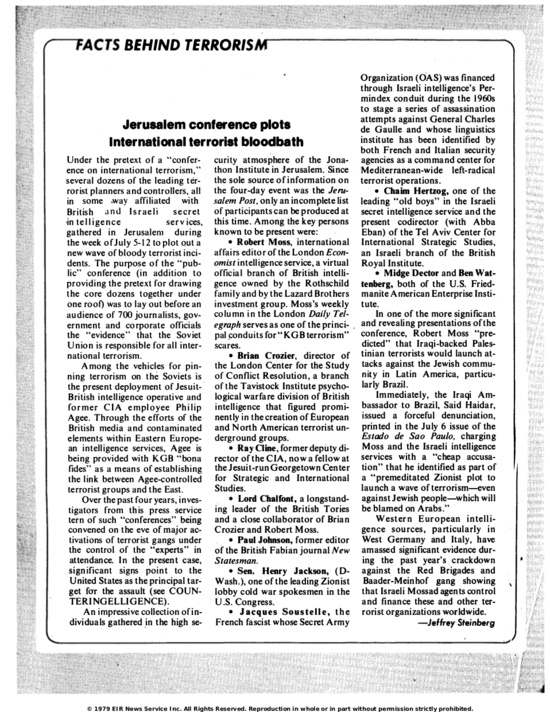 8 November 2017 Robin  A good overview of this seminal conference

This page imported content from Powerbase on 21 May 2015‎.
Powerbase is not affiliated with Wikispooks.   Original page source here
Retrieved from "https://wikispooks.com/w/index.php?title=Jerusalem_Conference_on_International_Terrorism&oldid=183854"
Categories: