From Wikispooks
(Redirected from Wars)
Jump to navigation Jump to search

War, as Randolph Bourne wrote, is the health of the state.

Great lengths are gone to to glorify war. Killing, usually proscribed in the strongest terms by most societies, is allowed and even glorified during a war. Patriotism, love of the country of ones birth and a readiness to kill strangers from outside it on demand are equated, particularly for the young male populations. The general narrative is of war as a necessary evil which should be tolerated within certain limits (the "laws of war" such as the Geneva Convention). Specific wars are always buttressed by carefully prepared official narratives particular to local circumstances, personalities and social mores.

A casus belli, a cause for war, is an essential part of the narrative of the "just war" which suggests that wars are acceptable. Referring to the United States's entry into World War I, US Senator Hiram Johnson is widely reported to have observed that "the first casualty when war comes is truth". 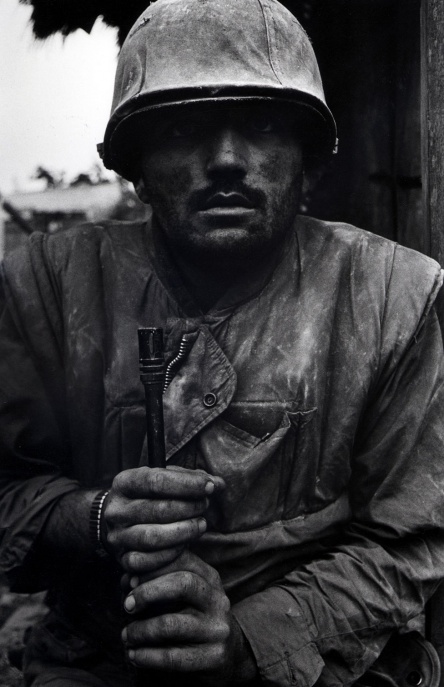 False Flag Attacks are attacks intended to be blamed on someone other than the perpetrator. Almost all modern wars begin with one or more such attack which the aggressor blames on the country they wish to attack, to provide a pretext to spur on the attacking forces and promote the support of third parties. These are sometimes treated with scepticism from the outset, other times they remain unrevealed for many years.

The Health Of The State

“In times of peace, without an external enemy, the fear that feeds war tends to find its outlet within the society, in the hatred between classes and races, in the everyday violence of crime, of automobile accidents, and even the self-violence of suicide. War sucks much of this up into one fulcrum and shoots it outward to make an un­known enemy pay for our internal sins.”
Ernest Becker (1975)  [1]

“War is the health of the state” [2] wrote Randolph Bourne in the midst of World War 1. As the nations of Europe went to war in 1914, the governments flourished, patriotism bloomed, class struggle was temporarily stilled, and young men died in their millions on the battlefields - often for a few hundred yards of land gained or lost.

In the United States, not yet in WWI, there was worry about the health of the state. Socialism was growing. The IWW seemed to be everywhere. Class conflict was intense. In the summer of 1916, during a Preparedness Day parade in San Francisco, a bomb exploded, killing nine people; two local radicals, Tom Mooney and Warren Billings, were arrested and would spend twenty years in prison. Shortly after that Senator James Wadsworth of New York suggested compulsory military training for all males to avert the danger that "these people of ours shall be divided into classes." Rather: "We must let our young men know that they owe some responsibility to this country."

"A bayonet is a weapon with a worker at each end." - An anonymous British pacifist slogan during World War II. 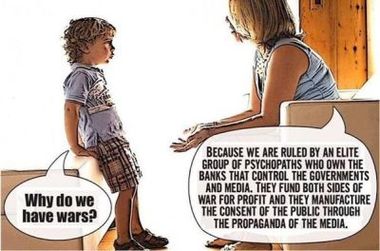 The "War on Terror" and the "War on Drugs" and are two examples of what Professor Peter Dale Scott refers to as "America's self-generating wars".[3] They are not intended to be won, as they provide a great increase in ease of social control. Many of those involved, from the DEA to the marketers of private prisons, from "terror experts" and their "counter-terror" industry which has sprung up, are so busy profiting from these wars that they don't stop to question them. As Global Research notes, the media “experts” "are nothing less than military salesman hyping their stock portfolios."[4]

In 1948, George Orwell's dystopian 1984 included the comment that “The primary aim of modern warfare is to use up the products of the machine without raising the general standard of living.” [5] In 1974, Mae Brussell predicted that "We are going to see a great number of articles in the future from so-called experts and public officials. They will warn about more violence, more kidnappings, and more terrorists. Mass media, the armed forces, and intelligence agencies will saturate our lives with fascist scare tactics and “predictions” that have already been planned to come true."[6]

The 1945 dropping of atomic weapons on the Japanese cities of Hiroshima and Nagasaki forever changed the narrative of war, in spite of extensive efforts to hide the longer term consequences of the attacks. No atomic weapons have been dropped on civilian populations since, though tens of thousands have been (and still are being) produced, most notably by the USA, which has more nuclear weapons than all other nations combined.

Biological warfare is prohibited, as is research into new viruses and biological agents. However, this ban is largely ineffective, since research into prevention of such developments is permitted - and amounts to more or less the same thing. In any case, biological weapons research labs are generally highly secure facilities not subject to oversight in any case.

Chemical warfare began in WW1 with the use of toxic gases such as chlorine, and the terrifying injuries quickly lead to a ban on its use. Chemical weapons such as white phosphorus are nevertheless sometimes used, even in urban areas, for example by Israeli forces in the Gaza War or by US forces in Fallujah.