20-year-old Adam Lanza shot and killed 26 people, including 20 children between six and seven years old, and six adult staff members. Earlier that day, before driving to the school, he shot and killed his mother at their Newtown home. As first responders arrived at the school, Lanza committed suicide by shooting himself in the head.[1]

The shooting prompted renewed debate about gun control in the United States including proposals to make the background-check system universal, and for new federal and state gun legislation banning the sale and manufacture of certain types of semi-automatic firearms and magazines with more than ten rounds of ammunition.[2][3] John Hickenlooper signed "landmark gun-control bills" in March 2013. Republican US Senator Greg Brophy remarked "We're all in shock here. It turns out this guy who everybody thought was a moderate Democrat is actually a gun-control governor."[4] The decision the rebuild the school is made in May 2013.[5][6]

James Fetzer believes that the attack was a false flag that used crisis actors to facilitate gun control.[7] He was hosted by, and worked with Alex Jones on this. Later both got sued for defamation.[8][9]

James Tracy highlights the research of retired school safety consultant Wolfgang Halbig[10] into several points of concern about the official narrative of the shooting.[11][12][13][14] Halbig tried for years through FOIA and Foia Lawsuits to receive the paperwork of the elementary school to get prove that the school was even in operation before the shooting.[15] Halbig was arrested in early 2020 for the possession of private information of Leonard Pozner.[16] 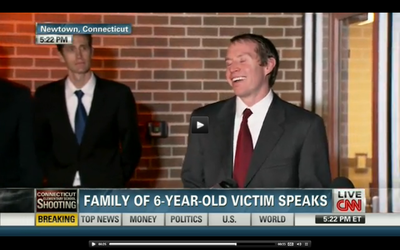 The short clip of Parker coming in through the door and walking towards the camera is known for years. It possibly was broadcasted that day on CNN, as it is seen in this screen-grab, or more likely, has been intercepted between production truck and TV station (a clip with the first 35 seconds and good resolution can be found on Odysee).[17] 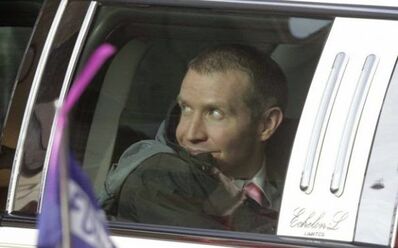 Robbie Parker, one of the parents of a murdered child, shortly before the start of a press conference, while walking towards the microphone, can be seen laughing and smiling. He then changes his mood, looking mournful with tears in his eyes, which is the part CNN made available in their video archive.[23] Videos that show just this are getting removed by Youtube with the reminder: "This video has been removed for violating YouTube's policy on harassment and bullying."[24]

There are indications, that victims funds were set up before the event.[25][26][27][28] At the time a Google engineer blamed a "technical glitch" for time stamps that show and earlier date than the event itself.[29] This is the case for a fund that was set up by United Way[30][31] and a GoFundMe page by a Desaree Juarez that was, according to the time stamp in their website, enabled on "December 13, 2012".[32][33] GoFundMe is an American company founded in May 2010 in San Diego, California.[34] It stands to reason that they are and have been using American time zones, making the possibility that the page being created on the 14th, but showing 13th rather implausible. It also brings up the question how many such server/configuration/"system" issues one is willing to believe in, in connection to the same event.

If Sandy Hook was indeed a false flag attack with (or without) crisis actors, then it would seem that these mistakes have been made in a deliberate way to divide society; between those who will pick up on these details and those people in society who will not look at the stuff as a matter of principle.

Some researchers identified people, who were interviewed as residents of Sandy Hook, were also present at the Boston Marathon Bombing. If in any and all cases the person in focus is really the same, is debatable (some videos clearly try to deceive the viewer). Strong resemblance, however, is demonstrated in some cases.[38]

A concentrated effort has been made to remove Internet blogs that were critical of the official narrative of the event.[39] Wordpress changed it's terms of service without notification as to be able to delete blogs that facilitate: "the malicious publication of unauthorized, identifying images of minors".[40][41][42] In addition, as of 2020, searches will bring up mostly websites that support the official narrative and attack those who have criticized it. This is in part due to harassment of people who are connected to the event.[43][44][45]

The National Shooting Sports Foundation, by some accounts the second most powerful gun lobby in America after the NRA, has it's headquarters in Newtown, Connecticut.[46]

In March 25, 2019, Jeremy Richman, who was the founder of the Avielle Foundation and the father of Avielle Richman who was killed "was found dead of an apparent suicide inside a historical town building, officials say."[47]