The Treaty on the Prohibition of Nuclear Weapons – or the Nuclear Weapon Ban Treaty (NWBT) – is a legally binding international agreement to prohibit nuclear weapons, leading towards their total elimination. According to proponents, it was intended to strengthen Article VI of the Non-Proliferation Treaty (NPT), which requires good faith efforts to negotiate effective measures on nuclear disarmament. Skeptics have argued that the NWBT would harm the NPT.[1] It contains "prohibitions against the development, testing, production, stockpiling, transfer, use and threat of use of nuclear weapons".[2] During the negotiations, the explicit prohibition of nuclear weapon stationing was added to Article 1, as well as the financial and other assistance to the prohibited activities.

Negotiations on the treaty began in the United Nations in March 2017 and continued from 15 June to 7 July 2017, according to a mandate adopted by the UN General Assembly in December 2016.[3] The text of the treaty was passed in an almost unanimous vote on 7 July 2017, in which 124 out of 193 UN members participated.[4]

Foreign Affairs Minister Simon Coveney announced on 7 July 2017 that Ireland had signed the United Nations treaty to prohibit and eliminate nuclear weapons. He said Ireland had played a leading role in bringing forward the resolution to the the Diplomatic Conference that negotiated this “ground-breaking” treaty:

“The text adopted today represents the successful outcome of the first multilateral nuclear disarmament negotiations in over 20 years. This new treaty is entirely consistent with the objectives of the United Nations.

“The very first UN Resolution in 1946 called for proposals on ‘the elimination from national armaments of atomic weapons and all other major weapons adaptable to mass destruction’.

“This Treaty will establish an important global norm and will help us to continue to raise awareness of the risks posed by the existence of these weapons. It honours the memory of the victims of nuclear weapons and the key role played by survivors in providing the living testimony which calls on us to ensure that these weapons are never used again. It also provides pathways for the accession of those States possessing nuclear weapons, when they decide to join.”[5] 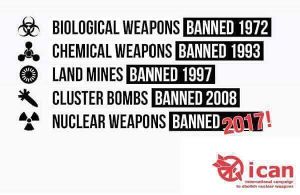 The Nuclear Weapon Ban Treaty, according to its proponents, will constitute an "unambiguous political commitment" to achieve and maintain a nuclear-weapon-free world.[6] However, unlike a comprehensive "nuclear weapons convention", it will not contain all of the legal and technical measures required to reach the point of elimination. Such provisions will instead be the subject of subsequent negotiations, allowing the initial agreement to be concluded relatively quickly and, if necessary, without the involvement of nuclear-armed nations.[7]

Proponents of the NWBT believe that it will help "stigmatise" nuclear weapons, and serve as a "catalyst" for elimination.[8] Around two-thirds of the world's nations have pledged to work together "to fill the legal gap" in the existing international regime governing nuclear weapons,[9] and view a nuclear-weapon-ban treaty as one option for achieving this objective.[10]

Nuclear weapons — unlike chemical weapons, biological weapons, anti-personnel landmines and cluster munitions — have not yet been prohibited in a comprehensive and universal manner.[11]

Proposals for a Nuclear Weapon Ban Treaty first emerged following a review conference of the NPT in 2010, at which the five nuclear-armed states parties — the United States, Russia, Britain, France and China — rejected calls for the start of negotiations on a comprehensive nuclear weapons convention.[12] Disarmament advocates proposed the NWBT as an alternative pathway forward.

The convening of three major intergovernmental conferences in 2013 and 2014 on the "humanitarian impact of nuclear weapons", in Norway, Mexico and Austria, strengthened the international resolve to outlaw nuclear weapons.[13] The second such conference, in Mexico in February 2014, concluded that the prohibition of a certain type of weapon typically precedes, and stimulates, its elimination.[14]

In 2014 a group of non-nuclear-armed nations known as the New Agenda Coalition (NAC) presented the idea of a Nuclear Weapon Ban Treaty to NPT states parties as a possible "effective measure" to implement Article VI of the NPT, which requires all states parties to pursue negotiations in good faith for nuclear disarmament. The NAC argued that a ban treaty would operate "alongside" and "in support of" the NPT.[15]

In 2015 the UN General Assembly established a working group with a mandate to address "concrete effective legal measures, legal provisions and norms" for attaining and maintaining a nuclear-weapon-free world.[16] In August 2016, it adopted a report recommending negotiations in 2017 on a "legally binding instrument to prohibit nuclear weapons, leading towards their total elimination".[17]

In October 2016, the First Committee of the UN General Assembly acted upon this recommendation by adopting a resolution that establishes a mandate for nuclear-weapon-ban treaty negotiations in 2017 (with 123 states voting in favour and 38 against, and 16 abstaining).[18] A second, confirmatory vote then took place in a plenary session of the General Assembly in December 2016.

First session of negotiations and first draft of a treaty

From 27 to 31 March 2017, convened as the United Nations Conference to Negotiate a Legally Binding Instrument to Prohibit Nuclear Weapons, Leading Towards their Total Elimination, a first round of negotiations was held at the UN headquarters in New York, with the participation of 132 nations. At the end, the president of the negotiating conference, Elayne Whyte Gómez, permanent representative of Costa Rica to the UN in Geneva,[19] called the adoption of a treaty by 7 July 2017 "an achievable goal".[20] Ray Acheson, director of the disarmament program of the Women's International League for Peace and Freedom, stated diverging opinions by mostly a few states regarding verification and the necessity of specific, supplementary prohibition on testing, threatening to use nuclear weapons and transport. In addition, most governments want to ban stockpiling of nuclear weapons, but leave disarmament for later negotiations with nuclear-armed states.[21]

Summarising the discussions, a first ban treaty draft[22] was presented on 22 May by Elayne Whyte Gómez.[23] The German section of International Campaign to Abolish Nuclear Weapons (ICAN) highlighted Article 1, 2a prohibiting any stationing of nuclear weapons on their own territory. Hence, several NATO states – Germany, the Netherlands, Belgium, Italy and Turkey – would have to end contracts on nuclear sharing with the USA before they possibly could sign the negotiated ban treaty.[24] Already in 2010, the German Bundestag had decided with large majority to withdraw nuclear bombs from Germany, but it was never realised.[25] By contrast, in June 2017 state secretary Sigmar Gabriel confirmed again nuclear stationing in Germany as well as the principle of equilibrium nuclear deterrence against Russia. He stated that consequently Germany could not support the ban process.[26] The only NATO member participating in the treaty negotiations was the Netherlands.[27]

Article 1, 1c (in extension of Article 1, 2a) prohibits direct or indirect control of nuclear weapons. Accepting this provision would preclude a common European nuclear force or German financing of and limited decision on the French "force de frappe"; both options are sometimes discussed.[28]

A second conference started at 15 June and was scheduled to conclude on 7 July 2017. 121 out of 193 UN members participated in the negotiations.[29]

On 27 June, a second draft was published.[30] It now offers a precise “join and destroy” option for nuclear armed states: States joining the treaty “shall submit, no later than sixty days after the submission of its declaration, a time-bound plan for the verified and irreversible destruction of its nuclear weapons programme to be negotiated with the States Parties” (Article 4, 1).[31] [32] A second “destroy and join” option (Article 4, 5) only provides cooperation with the IAEA in order to verify the correctness and completeness of the inventory of nuclear material, no verification of the elimination. This has been changed in the final text. A further discussed topic was the explicit acceptance of the “use of nuclear energy for peaceful purposes without discrimination”. The respective affirmation remained part of the final preamble.

A third draft as of 3 July 2017[33] provides signature from 19 September 2017. If 50 states have ratified, the treaty will enter into force 90 days later. A last obstacle for agreement was the condition of the withdrawal clause, meaning that a state party “in exercising its national sovereignty, [...] decides that extraordinary events related to the subject matter of the Treaty have jeopardised the supreme interests of its country.” The majority perspective was that this condition is subjective, and no security interests can justify genocide, nor can mass destruction contribute to security. However, as also a neutral withdrawal clause not giving reasons was not accepted by the minority, the respective Article 17 was accepted as a compromise. Safeguards against arbitrary use are the withdrawal period of twelve months and the prohibition of withdrawal during an armed conflict.[34]

The vote on the final draft[35] took place on 7 July 2017, with 122 countries in favour, 1 opposed (Netherlands), and 1 abstention (Singapore).[36] Among the countries voting for the treaty's adoption were South Africa and Kazakhstan[37], both of which formerly possessed nuclear weapons and gave them up voluntarily.

Leading proponents of a nuclear-weapon-ban treaty include Ireland, Austria, Brazil, Indonesia, Mexico, Nigeria, South Africa and Thailand.[38] All 54 nations of Africa (all but one of which have either signed or ratified the 1996 Treaty of Pelindaba establishing a nuclear-weapon-free-zone in the continent),[39] all 33 nations of Latin America and the Caribbean (already in a nuclear-weapon-free-zone under the 1967 Treaty of Tlatelolco)[40] and all 10 nations of Southeast Asia subscribe to common regional positions supporting a ban treaty. Many Pacific island nations are also supportive.[41]

No nuclear-armed nation has expressed support for a ban treaty; indeed, a number of them, including the United States[42] and Russia,[43] have expressed explicit opposition.

Many of the non-nuclear-armed members of NATO, along with Australia[44] and Japan,[45] are also resistant to a ban treaty, as they believe that US nuclear weapons enhance their security. A statement was put forward by several NATO members (not including France, the United States, or the United Kingdom, the nuclear weapon states within NATO), claiming that the treaty will be 'ineffective in eliminating nuclear weapons' and instead calling for advanced implementation of Article VI of the Non-Proliferation Treaty.[46]

Following the treaty's adoption, the permanent missions of the United States, the United Kingdom and France issued a joint statement indicating that they did not intend "to sign, ratify or ever become party to it". After stating that the instrument clearly disregarded the realities of the international security environment, they said accession to it was "incompatible with the policy of nuclear deterrence, which has been essential to keeping the peace in Europe and North Asia for over 70 years".[47]

The International Campaign to Abolish Nuclear Weapons (ICAN), a coalition of non-governmental organisations, is the main civil society actor working alongside governments to achieve a strong and effective ban treaty.[48] The International Red Cross and Red Crescent Movement has also championed an agreement to prohibit and eliminate nuclear weapons,[49] describing the UN working group recommendation to negotiate a ban in 2017 as "potentially historic".[50] Thousands of scientists from around the world signed an open letter in support of the negotiations.[51]

Political parties supporting the government in NATO member states often share the rejection of the nuclear ban negotiations and treaty by their governments. However, in May 2016 the Dutch parliament adopted a motion urging the government to work for "an international ban on nuclear weapons".[52] Earlier in 2016, a majority of Norwegian parliamentarians signalled their support for a ban.[53] Also in Germany, in 2010 the Bundestag opted with large majority for nuclear disengagement. Nevertheless, Norway and Germany did not participate in the negotiations, the Netherlands voted against the treaty.

In response to an appeal made by ICAN, over eight hundred parliamentarians around the world pledged their support for a ban treaty, calling upon "all national governments to negotiate a treaty banning nuclear weapons and leading to their complete eradication" and describing it as "necessary, feasible and increasingly urgent". The countries they represent included members of both the world's existing nuclear-weapon-free zones as well as NATO states. Of the five nuclear-armed permanent members of the United Nations Security Council, the United Kingdom was the only one to have elected representatives lend their support to the initiative.[54]

This page imported content from Wikipedia on 10 July 2017.
Wikipedia is not affiliated with Wikispooks.   Original page source here
Retrieved from "https://wikispooks.com/w/index.php?title=Nuclear_Weapon_Ban_Treaty&oldid=227597"
Categories: