Document:Speech to the European Parliament by Beatrice Fihn, Executive Director of ICAN 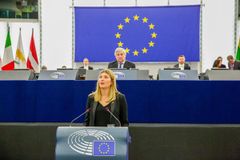 Thank you so much for this invitation to address you here today.

The Nobel Committee has seen fit on a few occasions to recognise not just one extraordinary person but a valuable body with awarding them the Nobel Peace Prize. They did so last year in awarding the coalition of almost 500 organisations that I represent, the International Campaign to Abolish Nuclear Weapons.

And they did so in 2012 in recognising the European Union for your efforts to advance peace and reconciliation, democracy and human rights. And it is an honour to stand here with another Peace Prize recipient, not as one individual but as a body – a large coalition working to safeguard our planet and our future.

And I come before you today at a time when the need to do so is dire. I come to address one huge challenge before all of us to make every other debate in this chamber irrelevant. I come to talk about the urgent danger of nuclear weapons and the very real threat they pose to life in Europe.

This is a dangerous time. The Bulletin of Atomic Scientists has just moved the Doomsday Clock to two minutes to midnight, meaning we are closer to Armageddon than at any point in the last 65 years. The war of words between North Korea and the United States threatens to boil over to a war of nuclear weapons. And Russia, China and all the other nuclear armed states are embarking on what essentially is a new nuclear arms race.

If we keep nuclear weapons forever, they will be used – by accident, miscalculation or through a cyber or terrorist attack. If we continue to rely on nuclear weapons, their use is a matter of when – not if!

If we don’t act, our luck will eventually run out. And the immediate effects of a nuclear blast would be devastating. The initial blast could level an entire city. The following fires will burn and suck out the oxygen in the remains of that city.

And many survivors will die in agony in the days or years to come through radiation poisoning or cancers. No adequate humanitarian response will be possible. And the effects of radiation on human beings would cause suffering and deaths decades after the initial explosion.

And Europe is not immune to these threats. It could very well be here that the next nuclear weapon will be used. And Europe has a grave responsibility to address them through rational co-operation – the very principle that this chamber was founded on.

A startling fact exists within today’s dangerous mix of instability, decreased co-operation and violent rhetoric, and the fact that the majority of the world’s nuclear weapons are right here in Europe.

Four out of the nine nuclear armed states have littered this continent with the most dangerous weapon ever invented – either on their soil or that of their allies, and of course patrolling the seas around us. And the world’s attention may currently be turned to the East to the Korean Peninsula but we are all standing on a ticking time bomb right here.

The risk of nuclear weapons use is greater today than at the end of the Cold War. But unlike the Cold War today we face many more nuclear armed states, terrorists, cyber warfare. All of this makes us less safe. Along with the many moral and strategic reasons for Europe to pursue peace, globally to reduce the nuclear threat beyond these shores, you have an awesome responsibility to lead on this issue because it affects all of your citizens.

You must decide whether the weapons of mass destruction – and luck – will remain at the heart of the framework in Europe. Or if you will lead the way to something new: a security framework worthy of the 21st century. The only nuclear policy that increases security is the only rational and responsible one: the prohibition and elimination of nuclear weapons.

And last week the United States released its new Nuclear Posture Review. It is a violent lurch in the wrong direction. And it outlines the new Trump Nuclear Doctrine that abandons the work for nuclear disarmament, the settlement the European allies and others under the nuclear umbrella have long understood.

It shows a deliberate strategy to make nuclear weapons easier and more likely to be used. Even as a response to a non-nuclear conflict it is an all-out attempt to take nuclear weapons out of the silos and onto the battlefields. And the problem does not stop there. Similar dreadful rhetoric in nuclear doctrines are seen from Russia, China and other nuclear armed states.

We are seeing a dangerous new nuclear arms race that attempts to blur the lines between nuclear and conventional weapons. And today we are just counting down the days until nuclear weapons are used again.

This is not peace through strength. This is instability through terror. It is a luck-based security policy, and that is simply not good enough. Are you going to support the new Trump Nuclear Doctrine? Join the thinking of Russia, North Korea? Cheer on a new nuclear arms race?

Or are you going to support the work for the prohibition and the elimination of nuclear weapons? You cannot do both. This is the choice between each member of the European Union.

And the EU together with the High Representative Federica Mogherini has been extremely effective in brokering an agreement with Iran. And this very body overwhelmingly in June 2016 voted to support our collective work towards the Nuclear Weapon Ban Treaty. Over the objections of powerful interests, 122 nations adopted the Treaty on the Prohibition of Nuclear Weapons last July. And EU member states like Austria, Ireland and Sweden showed great leadership throughout the negotiations. And we need all European states to show that leadership now. There is a clear pathway for you to do so.

The Treaty on the Prohibition of Nuclear Weapons is a political means to a nuclear-free world. And now we need political leadership. All EU member states should join the Treaty on the Prohibition of Nuclear Weapons. And this is entirely consistent with those obligations some EU member states have through their collective defence in NATO. And nothing in the North Atlantic Treaty signed EU states up to a nuclear instability doctrine based on luck and high risk. Nothing in our collective defence should force us to participate in using nuclear weapons on civilians. That is the opposite of collective security.

The security interest of Europe is not served by a new nuclear arms race, one that takes nuclear weapons onto the battlefield and threatens to end us all. We must move towards disarmament not destruction. Threatening to use weapons of mass destruction to indiscriminately slaughter hundreds of thousands of civilians runs counter to the humanitarian values and moral leadership of this body and all of Europe.

As the hands of the Doomsday Clock are being wound in the wrong direction, Europe must urgently take a stand, show the world that Europe leads on standing up for the principles of democracy, human rights and collective security.

And that first step can happen today. Go back to your governments and urge them to join the Treaty of the Prohibition of Nuclear Weapons, to join the community of nations who uphold the rule of law and the laws of war. And in doing so, reject the out-dated 20th century security framework that sits on an unhealthy obsession with Cold War relics. And this body, the European Parliament, is more important than ever.

At such a critical moment, it is vital that this body speaks forcefully, as it has done in the past in support of disarmament and non-proliferation, and in particular for the Nuclear Ban Treaty. And I urge you to turn those words into action by using the unique power of the European Parliament to promote policy in line with the EU values. Where there is uncertainty we should work towards understanding and consensus. And this is the process parliamentarians in countries like Italy and Norway are undergoing, investigating what the Nuclear Ban Treaty will mean for their wider policy and security. And this body should follow suit.

The EU Non-Proliferation Consortium (NPC) has provided invaluable guidance on implementation for example of the prohibition of biological weapons. And members of the European Parliament should request the NPC to examine how member states can join the Treaty on the Prohibition of Nuclear Weapons.

A highlight of this treaty was a close working relationship between political leaders and civil society. So the European Parliament should step up and reaffirm and strengthen its union with civil society. And the members in this room can and should swiftly take these steps rejecting the trend to increase this discord and dangerous nuclear posturing and supporting disarmament through the Treaty on the Prohibition of Nuclear Weapons.