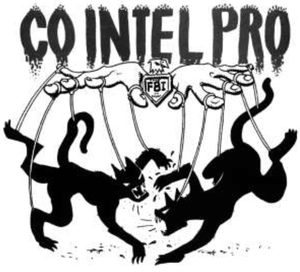 If this wasn't felt to be sufficient, other methods included giving right-wing groups like Ku Klux Klan or individuals run free to do the dirty work - or with some discreet guidance; assassinations by police; encouraging gang wars; and more.

These, and other means of subterfuge to was meant to, in the Bureau’s own words, foster factionalism and create suspicion within groups, bring individuals into disrepute before the American public, and create disruption and discord among such groups and movements in order to destroy the Left, or at least render it useless.[2]

The program especially targeted members of the Black Panthers movement, where most famously the leader (Fred Hampton) was assassinated by police, others were jailed on false accusations (Mumia abu-Jamal and many others).[3]

Even if the program officially closed down in 1971, the tactics of COINTELPRO continued. The gang wars in the black slums in the 1980s and 1990s were fueled by the CIA/Contra drug imports and the police's active participation in encouraging the divisions in the black community[citation needed].

The FBI and police used the same tactics against opponents of US interventions in Central America. Labeling the peace activists "terrorist", they paid informers to infiltrate church services, Bible classes and support networks of clergy and lay workers giving sanctuary to refugees from the CIA dirty wars in El Salvador, Nicaragua, Honduras and Guatemala. Tactics included infiltration, provocation, perjury, doctoring of evidence,break ins, sexual blackmail, frame ups and even assassination.[4]

The COINTELPRO tactics are still in use, by 2020 to combat “hate and extremist narratives" and conspiracy theories, citizens spreading "foreign disinformation", anti-vaxxers, Covid-deniers etc.

A 2019 academic paper suggests fighting “hate” (unacceptable political speech) by inserting a “population in a pre-engineered format” within a targeted “hate-cluster” and destroying it from within. [5]