Russiagate was a string of ever-mutating revelations about the Russian government having taken control of the American presidency, by blackmailing Donald Trump[1], starting influence campaigns on social media[2], supporting Bernie Sanders[3] and Jill Stein[4] and then by apparently not actually supporting Trump, or Trump not knowing of this support, but by "creating division in American society"[5].

In the never-ending cavalcade of supposed dramatic revelations of Russian collusion and meddling in corporate media, one noticeable factor is the way every of the hundreds of accusations and insinuations melted into thin air the moment their were scrutinized by alternative media[6][7]. Still, by their sheer amount and domination of the corporate news, the accusations left an impression of being solid, and have entered the "common knowledge" as something true in large sections of the population[citation needed], including in the ruling class.

Given that Donald Trump consistently has expanded the US military presence near Russia's borders, introduced heavy economic and political sanctions and quit most arms treaties, one can say that if the accusations of Trump being a Manchurian Candidate were true, the Russian government certainly hasn't got its money's worth (the official narrative mentions a $100.000 investment on Facebook social media campaigns[8]. 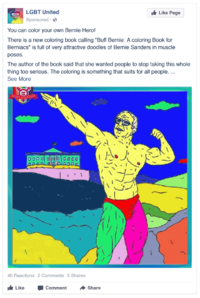 Actual example of the 'Russian' social media influence campaign that turned the election, from the (deadpan) Senate report[9]

Historically in the USA, semi-private deep state/intelligence networks have formed whenever a president is seen as unfit. The most infamous is the group that assassinated John F. Kennedy, but also the Watergate scandal that brought down Richard M. Nixon and the October Surprise that got rid of Carter, were arranged by 'former' intelligence operatives half-in-half-out of the official intelligence apparatus.

Career spooks and diplomats were in on the Russiagate conspiracy very early, as Trump had publicly declared against escalating CIA's covert war on Syria (2011-). The CIA attempt to topple the Syrian government, part of a bigger plan to control the Middle East[citation needed], had bogged down[citation needed], and would require a full military intervention to succeed. Hilary Clinton stated she wanted to establish no-fly zones and safe-havens[10][11], old humanitarian pretexts used in other interventions, like Libya, but in Syria this might lead to a war with Russia.

When Donald trump unexpectedly[12][13] won the presidential election in 2016, a deep state faction in the Obama administration with loyalty to the Clinton network, decided to start a psychological operation to topple Trump. This group overlapped with career spooks wanting Trump to follow a specific pre-planned foreign policy, especially on the covert wars in Syria and Ukraine, and had support from certain sectors of the Republican party[14]. 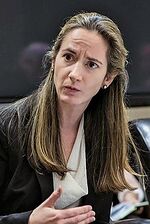 In a striking coincidence, Avril Haines also participated in the 2019 Event 201 dress rehearsal for the Covid pandemic. Is the lockdown-created economic crash also a continuation of the attempt to get rid of Trump??

British intelligence services played an early active role in the case[19], at least from August 2016, with the dodgy Steele dossier and attempts at entrapments of Trump aides. 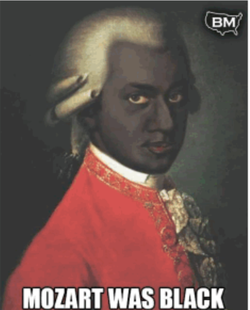 According to the expert report, the Russians targeted Black populations groups, "which were presented with distinct historical conspiracies – intended to reinforce cultural identity as well as create discord." One repeated idea was "that Wolfgang Amadeus Mozart was Black".(Reassuringly "debunked by fact-checker Snopes")"[20]

The official story goes that the Russian government hacked into the servers of the Democratic Party (DNC), where files incriminating Hillary Clinton were found and later given to Wikileaks. This storyline is part of the basis for the attempt to crack WikiLeaks and imprison Julian Assange[citation needed]. 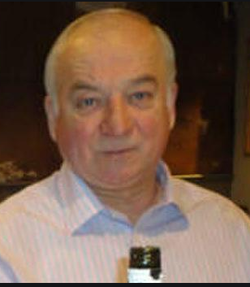 There is a hypothesis that Sergei Skripal was an informant for Steele's dossier. When the FBI checked the info in 2017, he said his work had been falsified. In 2018, he was poisoned(?) in the UK, and very conveniently removed from the Russiagate narrative. (See:Dirty dossier)

There is a British connection to the early attempt to find dirt on Trump, to MI6 agent Christopher Steele, who presented a dossier to the FBI, with one notable claim that the Russian government had filmed Donald Trump in a compromising situation in Moscow (the 'golden shower'/'pee-tapes'), which later were revealed to have been a fan fiction story sourced from the internet[citation needed].

A long Senate investigation into Russian influence on social media having tipped the election to Trump, ended up with concluding that a company in St.Petersburg, the Internet Research Agency ('Russian', thereby automatically 'the Russian government') had spent money on social media campaigns. Facebook, after having dug deeply, eventually came up with the sum of $100.000[21] spent on ads - this in an election campaign with a total $6.5 billion spend).

The prime examples of 'Russian influence attempts' the report chose to highlight, can only be described as proof of anything but an influence campaign.(see examples spread around the page). 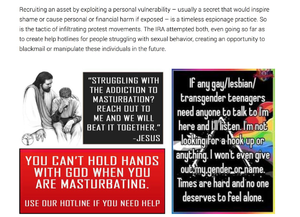 The Senate experts pondered to make sense of certain other memes, except being dead certain that they were in fact 'influence attempts' [23]

Among the other outré claims were that the Internet Research Agency had "tentacles [which] extended to YouTube, Tumblr and even Pokémon Go."[24] As Caitlin Johnstone pointed out: "And of course, as always, when we read beyond the clickbait “Russia propagandized your children with viral video game apps!” headline we find that when CNN says that Pokémon Go was used to interfere in the 2016 election what they really mean is that there is no evidence whatsoever[25] that Pokémon Go was used to interfere in the 2016 election. We learn that some scarcely-viewed media was used to direct attention to police brutality against African Americans (a subject which should get more attention anyway) by a “Kremlin-linked troll farm” whose Tumblr account now posts about Palestine.CNN’s source on this matter? Literally cited only as “A source familiar with the matter”."[26]

The lack of substance behind these claims did not hinder the start of a very extensive U.S./NATO network of fact checkers, media influence operations, social pressure exerted against people disagreeing, and an ongoing extensive corporate censorship effort.

There was an early attempt to infiltrate the Trump campaign and preferably entrap campaign workers.

A probable British intelligence operative, professor Joseph Mifsud, presumably on an entrapment mission, allegedly discussed that Russia has ‘dirt’ on Clinton in the form of ‘thousands of emails’ with Trump campaign worked George Papadopoulos in London in April 2016.[27]

The following month,Alexander Downer, Australia’s ambassador to the UK, was sent[citation needed] to get Papadopoulos to say something incriminating on acquiring alleged Russian dirt on Clinton, while they were drinking at a swanky Kensington bar. In late July 2016, Downer shared his tip with Australian intelligence officials who forwarded it to the FBI.

Later, during a visit to Israel, Papadopoulos was handed $10.000 in cash from an Israeli 'campaign donor'. Papadopoulos left the money in trust with an attorney in Greece before going back to the United States. At US customs, he was frisked, making him realieze the money was an entrapment attempt.[citation needed]

Having recorded these statements, the FBI got him to incriminate himself by denying having made them. On October 5, 2017, Papadopoulos pleaded guilty to making false statements to FBI agents about the timing and the possible significance of his contacts in 2016. 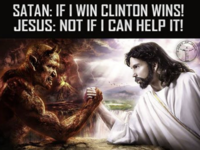 Actual example of the 'Russian' social media influence campaign that turned the election, from the (deadpan) Senate report[28]

After a 2 year Senate investigation, with endless teasers in media of dramatic revelations, a team led by Robert Mueller concluded “The Special Counsel’s investigation did not find that the Trump campaign or anyone associated with it conspired or coordinated with Russia in its efforts to influence the 2016 US Presidential Election…the report does not recommend any further indictments, nor did the Special Counsel obtain any sealed indictments that have yet to be made public.”

Robert Mueller did not charge any Americans with collusion, coordination, or criminal conspiracy between the Trump campaign and Russia. The special counsel also considered whether members of the Trump campaign “coordinated,” a much lower standard defined as an “agreement, tacit or express,” with Russian election interference activities. They did not.[29]

The first conclusions to emerge from Robert Mueller’s report will prove discomfiting to the centrist, Clinton-affiliated wing of the Democratic Party, which blamed Hillary Clinton’s 2016 election defeat on a Russian plot. They will also be a serious affront to most in the US media, which has for two years made ‘Russiagate’ its biggest story.

Donald Trump, it seems, has been emboldened by the report. Throughout his presidency he has repeated, like an automaton: ‘No collusion!’ Attorney general William Barr’s summary of the document suggests that he was right: ‘The investigation did not establish that members of the Trump Campaign conspired or coordinated with the Russian government in its election interference activities.’ All the Trump officials who have already been convicted were charged with other crimes: tax fraud, making false statements to a congressional committee, etc.

Democrats on the left could also find strength in Mueller’s verdict. Now, their party may have to abandon the narrative and breathless tone of a bad spy novel, and devote its energy to the issues facing American society. This is its best hope if it wants to beat Trump at the end of next year.[30]

In a revelation of the cynicism behind the scenes, CNN executive Van Jones termed it a 'big nothing burger' to a hidden recording.

Matt Taibbi wrote in March 2019 that It's official: Russiagate is this generation's WMD.

The story hyped from the start was espionage: a secret relationship between the Trump campaign and Russian spooks who’d helped him win the election.

The betrayal narrative was not reported as metaphor. It was not “Trump likes the Russians so much, he might as well be a spy for them.” It was literal spying, treason, and election-fixing – crimes so severe, former NSA employee John Schindler told reporters, Trump “will die in jail.”

In the early months of this scandal, the New York Times said Trump’s campaign had “repeated contacts” with Russian intelligence; the Wall Street Journal told us our spy agencies were withholding intelligence from the new President out of fear he was compromised; news leaked out our spy chiefs had even told other countries like Israel not to share their intel with us, because the Russians might have “leverages of pressure” on Trump.[31]

The narrative of Russiagate has been used to reinforce the new cold war with Russia[citation needed] and creating an external enemy[citation needed] to gather the establishment ideology around, including as a rationale for coups and regime changes. The operation started a new witch-hunting McCarthyism, extensive new propaganda and influence activities, monitoring of declared internal enemies, military expansion and a systematic and ever expanding corporate/state effort at censorship and thought control.[citation needed]