Karl Lauterbach is a German politician from the Social Democratic Party of Germany. He rose to sudden prominence during COVID-19, where he received huge attention in corporate media as a moralistic 'Dr. Doom' promoting the official narrative. He became Minister of Health in December 2021. 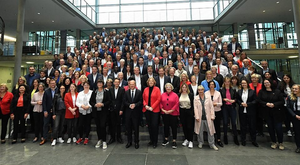 The new SPD parliamentarians lined up for a photo shoot. Only one of them wore a face mask (COVID prophet of doom Karl Lauterbach). At the same time school children in the country are forced to wear them all day.

After the 2021 German parliamentary election, he was a part of his party's delegation in the working group on health in the coalition negotiations. He might be appointed Health Minister in the new government.[1]

His ex-wife (married 1996-2004) Dr. Angela Spelsberg, argued with him for years about the maintenance of their four children. In a 2013 interview, she stated: “He always puts his social conscience in the foreground in public. In my private life, however, I got to know him from a completely different perspective. I think what's going on in his head is questionable...I am extremely disappointed in Mr. Lauterbach. I fear that the public also overestimates his moral suitability".[2]