Glyphosate is a formerly very widely used herbicide. Its toxicity was known to Monsanto, but was hidden for decades. Since around 2014, its toxicity was increasingly exposed[1] and by 2019 it was being ruled as carcinogenic. In 2019 it was banned in Austria[2] and increasing efforts were underway to ban it in Germany[3] and worldwide.[4] It an by August 2019, Bayer was reported to be seeking to settle 18,000 cancer lawsuits in the US for $8 billion.[5] By June 2020 it had agreed to pay this much to settle cancer claims.[6]

Wikipedia's page prominently reports the impressively referenced remark that Glyphosate "has been called by experts in herbicides 'virtually ideal' due to its broad spectrum and low toxicity to animal life compared with other herbicides"[7]. The page used to read like an advertisement for the product, particularly the sections at the top of the page, which are almost free of any suggestion of difficulties.

As one of the most widely used herbicides[8], it is perhaps hardly surprising that the Wikipedia page is subject to particularly close monitoring. The page history exemplifies Wikipedia's censorship in action; a large number of primary studies have recently been done, pointing out different health risks of glyphosate for humans[9]. These are not permissible under Wikipedia's 'reliability policy', so mention of them is removed from the article (usually within minutes). Studies also suggest that it has been damaging to butterfly populations. Until March 2015, no suggestion of human toxicity was allowed to remain in the article. The first such was the International Agency for Research on Cancer's determination that it is "probably carcinogenic in humans", which as of April 2015 was still relegated to the last sentence in the article's lede and a downplayed sub-sub-sub-section.[10]

The validity of the findings of supposedly independent peer-reviewed research has been cast into doubt after it emerged in 2015 that Monsanto had provided GM-friendly researcher Kevin Folta with a $25,000 grant that "may be used at your discretion in support of your research and outreach projects."[11][12] 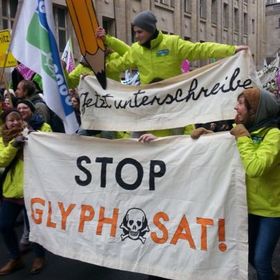 Activism against glyphosate stepped up in 2017.[citation needed] A study published in November 2017 look at Glyphosate levels in California residents from 1993 determined that "over the next 22 years, we found about a 1,000 percent increase in the levels found in [the urine of] the 100 people, on average."[13]

Monsanto patented the chemical in the early 1970s, patents which expired in 2000, leaving other manufacturers free to produce it. It was sold together with GM crops that resist it, so-called "Roundup ready".[14]

The toxicity of Glyphosate has been a matter of heated debate. The EPA/Monsanto-sponsored official narrative of its safety began to seriously fall apart in 2015, when various studies were produced claiming different toxicity and errors were uncovered in EPA studies.[15] "Toxicity studies in rodents have found that glyphosate can damage the liver and kidneys, even for doses in the range generally considered safe for humans."[14] It also poses a threat to organisms that live in the soil and are needed for fertility like earthworms.[16]

In spite of 1991 documents suggest that the US Environmental Protection Agency (EPA) was fully aware of glyphosate’s carcinogenic potential, glyphosate was nevertheless downgraded that year to Class E “evidence of non-carcinogenicity for humans”.[18]

In 2013, the Environmental Protection Agency said that it had determined glyphosate to be noncarcinogenic, awarding it a toxicity Class of III (on a I to IV scale, where IV is least dangerous) for oral and inhalation exposure, and upped the legal limit for exposure by an order of magnitude.[19][20] This is in spite of "countless"[21] studies linking it to cancer, none of which was allowed to remain for long on the Wikipedia page until 2015 when the International Agency for Research on Cancer named glyphosate as a probable carcinogen.[22]. 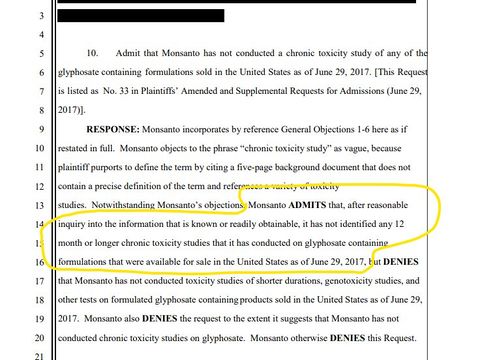 In 2018, a jury determined that Monsanto's Roundup was carcinogenic.[23] Court proceedings led Monsanto to admit that it "has not identified any 12 month or longer chronic toxity studies" of current Roundup products.[24][25] 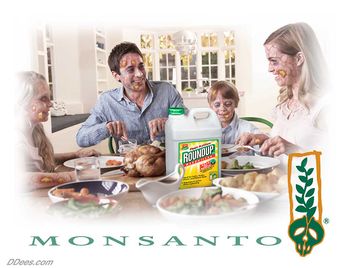 An image from the Dees Illustration Studio‎.

In March 2015, the WHO's International Agency for Research on Cancer issued a statement which classified glyphosate as "probably carcinogenic" to humans and "sufficiently demonstrated" as genotoxic in animals.[26] It reportedly "missed by a whisker being labelled ‘definitely’ carcinogenic".[27]

On August 25, a paper was published in Environmental Health which looked at gene expression in the kidneys and liver after long term exposure to very low (US legally permitted) levels. They stated that "Given even very low levels of exposure, Roundup can potentially result in organ damage when it comes to liver and kidney function... The severity we don’t know, but our data say there will be harm given enough time."[28]

Speaking on the safety of Glyphosate, Patrick Moore, a Monsanto lobbyist claimed on French television that "you can drink a whole quart of it and it won’t hurt you". However, when the interviewer then called his bluff by asking "You want to drink some? We have some here", Moore was visibly taken aback. While claiming it was safe, Moore refused to drink any. He terminated the interview, without drinking any, stating before he left the studio "I’m not stupid!"[29][30]

The WHO announcement was swiftly followed by an intensification of efforts to ban the pesticide in a several countries. Sri Lanka, suffering a spate of kidney disease widely attributed to glyphosate, has banned it in May 2015[31] while other countries are moving to ban, restrict of further investigate its health impacts.[32]

Mindful of safety concerns, various companies have announced that whatever national legislation is passed, they will be reducing their sales of Glyphosate. At least one large retail chain is phasing out Glyphosate completely from its stores.[33]

An Environmental Protection Agency report was briefly published on its website indicating that glyphosate was not carcinogenic, but was deleted after a few days. The EPA were slow to provide the report in response to a FOIA request by Right to Know a food safety advocacy group.[34]

In 2017, California's Office of Environmental Health Hazard Assessment announced that they would add Glyphosate to their list of chemicals known to cause cancer.[35] In October 2017, after 1 million Europeans requested a ban, 72% of the Members of the European Parliament voted to ban glyphosate and EU Member states have refused to renew the license.[36]

The New York Times reported that in 1996, "Dennis C. Vacco, the Attorney General of New York, ordered the company to pull ads that said Roundup was "safer than table salt" and "practically nontoxic" to mammals, birds and fish. The company withdrew the spots, but also said that the phrase in question was permissible under EPA guidelines."[37]

On two occasions, the United States EPA has caught scientists deliberately falsifying test results at research laboratories hired by Monsanto to study glyphosate.[38] The first incident involved Industrial Biotest Laboratories (IBT). The United States Justice Department closed the laboratory in 1978, and its leadership was found guilty in 1983 of charges of falsifying statements, falsifying scientific data submitted to the government, and mail fraud.[39] In 1991, Don Craven, the owner of Craven Laboratories and three employees were indicted on 20 felony counts. Craven, along with fourteen employees were found guilty of similar crimes.[40]

Monsanto has stated the Craven Labs investigation was started by the EPA after a pesticide industry task force discovered irregularities, that the studies have been repeated, and that Roundup's EPA certification does not now use any studies from Craven Labs or IBT.[38]