LSV Minerva is an elite fraternity from the University of Leiden. A report from the newspaper Volkskrant reported "two-thirds of influential Netherlands was a member of Minerva in 2010.[1]

Founded in 1866, the Royal Leiden Student Association for Voluntary Exercise in Arms "Pro Patria" is a student militia. The militia is a sub-association of LSV Minerva. The mother regiment in the armed forces is the Garderegiment Grenadiers en Jagers. 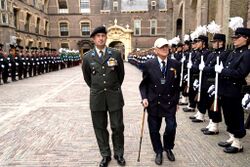 In addition to practicing shooting, Pro Patria takes part in military maneuvers, visits various defense units and contributes to the guard of honor during Prinsjesdag. Pro Patria also participates in Veterans Day as a ceremonial guard. Pro Patria also performs ceremonial tasks during the loyalty and mourning of members of the Royal House, as well as during visits by royals to Leiden Univeristy.

In addition, Pro Patria organizes discussion evenings on international security issues. Pro Patria is also a social association and is noted by the involvement of many former members.

At the beginning of the 21st century, Pro Patria is still an active association and, along with the other student militias, the wedding of Crown Prince Willem Alexander and Máxima Zorreguieta and at the funerals of Queen Juliana, Prince Claus and Prince Bernhard. Since 1999, Pro Patria has also had female members.

Pro Patria was under increased scrunity during the cold war for their "scary-nationalistic" and "anti-monarch" sentiment which included refusing to wave to Queen Beatrix[2]. Surrounding the deep politics behind the 1981 Dutch Cabinet crisis, the subgroup was banned from military practises, being banned from the yearly proceeding in the parliamentary quarter of The Hague in 1990 as well.[3][4]

18 of the 166 of the participants already have pages here: