David Graeber is the son of self-taught working-class intellectuals, and is an anarchist anthropologist. He won a Fulbright fellowship and completed a Ph.D. on magic, slavery, and politics in Madagascar. He is a relatively prominent academic (whose rehiring Yale turned down in 2007 - defying a petition of almost 5000 signatories), currently employed by Goldsmiths, University of London.

David Graeber has a long history of activism including a role in protests against the World Economic Forum in New York City in 2002, membership in the IWW. He was one of the organizers of the Occupy Wall St. protests.[1]

He has published various non-fiction books, including a highly impressive theory of money and debt, entitled Debt, The First 5000 Years, which was read on Unwelcome Guests.

A Document by David Graeber 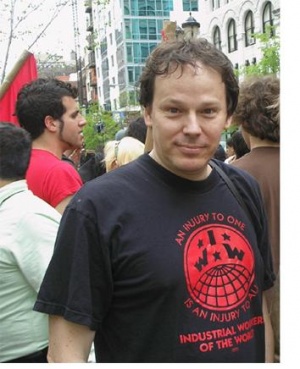