Richard Norton-Taylor (born 6 June 1944) is a British author, editor, journalist and playwright who writes for The Guardian on defence and security matters, and was the newspaper's security editor.

"I am a supporter of Stop the War Coalition because over the past several decades military intervention by the West and by others has been counterproductive, causing more death and destruction. As we are now seeing, this was the case in Iraq and Afghanistan. It would be much more effective to get to the root causes of the problem behind the spread of terrorism and other security threats."

Norton-Taylor was educated at King's School in Canterbury, Kent, and at Hertford College, a constituent college of the University of Oxford.

He was European Community and Brussels, Belgium, correspondent for both The Washington Post and Newsweek between 1967 and 1975, while also contributing to The Economist and the Financial Times.

Norton-Taylor joined The Guardian in 1975, concentrating on Whitehall official secrecy and behind-the-scenes decision-making.

He has written several plays based on transcripts of public inquiries including The Colour of Justice (1999) based on the hearing of the Stephen Lawrence public inquiries into the police investigation (MacPherson Inquiry) into the police conduct of the investigation into the murder of Stephen Lawrence and Justifying War: Scenes from the Hutton Inquiry (2003).

Norton-Taylor is a Member of Council of the Royal United Services Institute (RUSI).

He is a trustee of the Civil Liberties Trust and the London Action Trust. 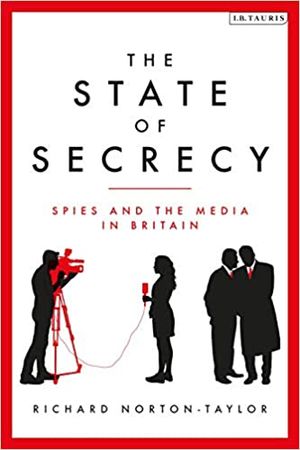 In March 2019, Norton-Taylor's book "The State of Secrecy: Spies and the Media in Britain" was published with this Amazon review:

Richard Norton-Taylor reveals the secrets of his forty-year career as a journalist covering the world of spies and their masters in Whitehall. Early in his career, Norton-Taylor successfully campaigned against official secrecy, gaining a reputation inside the Whitehall establishment and the outside world alike for his relentless determination to expose wrongdoing and incompetence. His special targets have always been the security and intelligence agencies and the Ministry of Defence, institutions that often hide behind the cloak of national security to protect themselves from embarrassment and being held to account.

Encouraged by his trusted contacts in intelligence agencies and Whitehall departments, Norton-Taylor was among the first of the few journalists consistently to attack the planned invasion of Iraq in 2003 and subsequently covered for The Guardian the devastating evidence of every witness to the Chilcot Inquiry. He also enjoyed unique access to a wide array of defence sources, giving him a rare insight into the disputes among top military commanders as they struggled to fight wars in Iraq and Afghanistan with under-resourced and ill-equipped troops.

Described by a former senior Intelligence official as a 'long-term thorn in the side of the intelligence establishment', and winner of numerous awards for his journalism, Norton-Taylor is one of the most respected defence and security journalists of his generation. Provocative, and rich in anecdotes, "The State of Secrecy" is an illuminating, critical and, at times, provocative account of the author's experiences investigating the secret world.[1]

Norton-Taylor won the 1986 Freedom of Information Campaign award, and the same year was prevented by a court injunction from reporting the contents of Spycatcher (1987), the memoirs of the former MI5 agent, Peter Wright. The government's injunction was dismissed in the High Court by Lord Justice Scott.

He was one of the few journalists to cover the Scott Inquiry from start to finish. His play, Half the Picture, based on the inquiry, received a 1994 Time Out Drama, Comedy and Dance award for its "brave initiative".

In 1967, he married Anna C. Rendle, eldest daughter of Mr. and Mrs. J. E. Rendle, of Kemerton, near Tewkesbury, Gloucestershire.

This page imported content from Wikipedia on 13 April 2013.
Wikipedia is not affiliated with Wikispooks.   Original page source here
Retrieved from "https://wikispooks.com/w/index.php?title=Richard_Norton-Taylor&oldid=186572"
Categories: