The European House – Ambrosetti claims to be the number 1 think-tank in Italy and in the top 10 in Europe. It manages a highly influential club of Italian business elite, and also offer management consulting services.

The Ambrosetti Club which brings together more than 300 members from the top management of both national and multinational companies active in Italy. "We’ve called them elite, and we don’t think we’re wrong. A select group that thinks, discusses and develops an invaluable perspective which is then made available to all. For the good of the country"[1].

The club also arranges more than 60 meetings a year throughout Italy, in the form of round tables in which national and international representatives of the political, economic and social sectors take part. 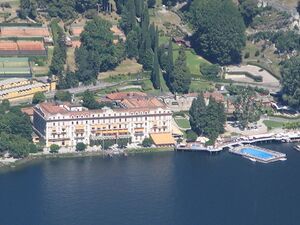 The villa hosted the 1965 and 1987 Bilderberg conferences

Each year in September it arranges an forum at Villa d’Este in Cernobbio, which on occasion has hosted Bilderberg conferences. The event, held each year since 1975, is entitled Intelligence on the World, Europe, and Italy and brings together an array of speakers of the highest level from the world of politics, academia, government and business, from across the globe. Ambrosetti states "the secret of the event’s success lies in its exclusive nature"[2].

The think-tank has three major areas of study, developing scenario projects on, things like Italy's relative decline, where "The Old World risks becoming increasingly relegated to the fringe of the economic system" because it has "lost much of its competitive capacity". Therefore, the challenge to be faced is that how to create growth, with solutions including goodbye to things uniquely Italian and an internationalization "including infrastructure, liberalization, governance, innovation, knowledge and cultural integration." [4]