Vincent Cannistraro was a former officer with the CIA's Directorate of Operations in the Middle East, Africa, Europe and Central America (1964-1984).[1][2] Cannistraro was appointed Director of Intelligence Programs for the United States National Security Council (NSC) from 1984 to 1987, and Special Assistant for Intelligence in the Office of the Secretary of Defense until 1988.[3]

As Chief of Operations and Analysis at the CIA's Counterterrorism Center, Cannistraro led the agency's "investigation" into the 1988 bombing of Pan Am Flight 103 over Lockerbie, which resulted in the conviction in 2001 of the Libyan Abdelbaset al-Megrahi. Originally listed as a prosecution witness, Cannistraro was not called to testify at the Pan Am Flight 103 bombing trial which was held at Camp Zeist in the Netherlands.[4]

Cannistaro has a B.A. and M.A. from Boston College. In 1989, he received the Secretary of Defense's Award for Meritorious Civilian Service. He has also received the CIA Medal for Distinguished Service.

While at the CIA, Cannistraro ran the agency's Central American task force that supervised covert action in the region, including the Nicaraguan Contras (both the left wing guerrillas in the South and the right wing contras in the North). He moved to the Reagan NSC by the direction of CIA Latin American Chief Duane Clarridge, who supported Colonel Oliver North. [5] The Contra program was transferred in 1984 by President Ronald Reagan to the NSC, [6] and Cannistraro was made Director of Intelligence there later that year.[7] As Director, he was responsible for monitoring the US intelligence community budget. [8] and coordinating the approval process for covert action. He also chaired the Afghanistan Working Group at the White House. [9]

Cannistraro also linked Iraq with Osama bin Laden when he alleged that Iraqi intelligence agent Farouk Hijazi had invited bin Laden to live in Iraq during a December 1998 meeting in Afghanistan, though he maintained that bin Laden refused the invitation and did not accept support from Saddam Hussein.[10]

He reported on the forged Niger "yellowcake" uranium documents as an attempt by some Bush Administration supporters to link Iraq with nuclear weapons development in order to increase public support for the Iraq war, and on the related disclosure of the identity of CIA agent Valerie Plame.[11]

The front company, Brewster Jennings & Associates, apparently also was used by other CIA officers whose work now could be at risk, according to Cannistraro.

Cannistaro runs IntelligenceBrief, a security and information service for private clients, including The Vatican.

On September 12, 2001, Cannistraro stated that five of the hijackers had entered the United States in Maine from Canada via Yarmouth, Nova Scotia, and/or a remote border point near Jackman, Maine, several hundred kilometres southeast of Quebec City. A Canadian Intelligence officer declared that Cannistraro was wrong. "They didn't hijack Canadian planes, they got through airport security in the U.S., not here."[12]

Since leaving the CIA in 1991, after 27 years with the agency, Cannistraro has worked as a consultant on "terrorism" and security issues for a number of corporate and government clients, including ABC News and the Vatican.[13]

Vincent Cannistraro insisted that Oswald LeWinter was never a CIA employee, stating "The guy is a chameleon. He can show up and pretend to be anyone."[14]

In the 1994 film The Maltese Double Cross - Lockerbie, LeWinter is identified as "CIA 1968-85" and gets his own back on Cannistraro, saying:

"What is that famous saying about 'putting the fox in charge of the chicken coop'? For Vincent Cannistraro to be put in charge of investigating Lockerbie would be funny if it weren't an obscenity."

Vince Cannistraro has stated that there was speculation that Urban Moving Systems was a front for an Israeli intelligence operation investigating fund-raising networks channeling money to Hamas and Islamic Jihad. He reported that the group may have been "set up or exploited for the purpose of launching an intelligence operation against radical Islamists in the area, particularly in the New Jersey-New York area."[15] This is at odds with an alternative perspective that suggests that the group was involved in 9-11. 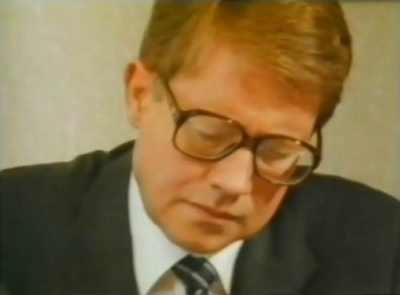 Assistant-Secretary-General of the United Nations and UN Commissioner for Namibia, Bernt Carlsson

Messrs Marquise and Henderson have so far been slow in answering these seven questions about Pan Am Flight 103's most prominent victim. Since you used to be the CIA's expert on the Lockerbie disaster (1988-90), are you now able to comment on the likelihood that Bernt Carlsson was the terrorists' target?
Regards,
Patrick Haseldine
HM Diplomatic Service
(1971-89)[18]

According to Patrick Haseldine, none of those seven Lockerbie questions has yet been answered.