Vaccines are designed to strengthen people's resistance to disease, by stimulating their immune system. They typically work by injection with a weakened or otherwise crippled version of a potentially dangerous virus. Vaccines are disease-specific, and their efficacy varies widely between viruses. In recent years, increasing numbers of people have become concerned about risks of vaccines, not least because of the ability of big pharma to influence lawmakers and silence public debate.

Vaccines approved for use by the authorities are safe, so independent verification or suspicion is unjustified. Any claims against US vaccine manufacturers cannot normally be filed in state or federal civil courts, but instead are heard in the (juryless) Vaccine court.[1] 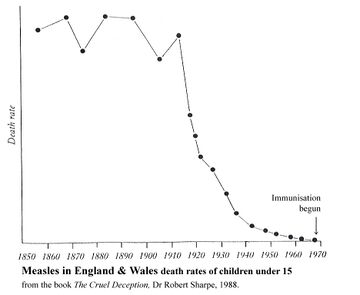 Critics argue that the reasons for the increase in life expectancy and general health of the population, since the beginning of the 20th century, are improvements in nutrition, living and working conditions, hygiene and sanitation. Medical measures only have a relatively marginal effect. Mortality for nearly all infectious diseases was declining before, and in most cases long before, specific therapies (vaccinations) became available. 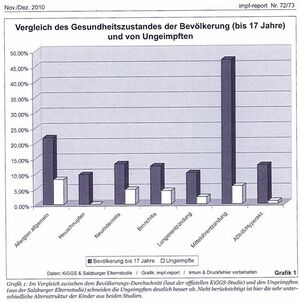 Industry is not willing to do a large study that will analyse the overall health of vaccinated vs. unvaccinated persons/children. In their argument it would be unjust to not let everyone benefit from vaccinations. So it is up to people who got frustrated from this situation to do one of their own. The Salzburger Elternstudie (Salzburgs Parent Study) from 2010 asked specific question about the health situation and got reply from parents of 1381 children. The answers to the survey came mostly from Germany, Austria and Switzerland. The graphic shows a comparison between vaccinated persons not older than 17 from a KiGGS study[2] (dark) and unvaccinated children (white) whose parents responded to the survey on: hayfever (2nd from left), neurodermatitis, bronchitis, pneumonia, middle ear inflammation and ADHS.[3][4][5]

Some vaccines, particularly mandatory ones, have been the subject of controversy, with some alleging that they are unsafe (in particular that they cause autism, a charge that the FDA sought to avoid by falsification of data), while others that they are necessary for maintenance of healthy populations. The Wikipedia page has been subject to protection and many methods are employed throughout publishing, broadcasting and Internet to silent dissent on the topic.[6]

Virologists have exaggerated data to get promotion for their studies, tests and new vaccines. David Evans, University of Alberta in Edmonton, Canada even argues proliferation of smallpox RNA (to re-synthesize the extinct virus) should be made legal in order to promote development of newer, better vaccines! This in the light that smallpox extincted due to already available vaccination. [7]

Most, perhaps all, regularly used vaccines are supported by medical research which has been peer reviewed and agreed to reduce the health risks of one or more health condition(s).

Some vaccines have been administered without warning even when it was known that they contained impurities which were carcinogenic in laboratory animals.[8] Some vaccines, even when correctly administered, may cause disease, or even mutate and cause virus outbreaks. This has happened several times in Africa in response to live polio vaccines.[9] Since 1988, the US government has paid over $3.2 billion to over 4150 individuals and families for injuries and deaths attributed to shots for flu, diphtheria, whooping cough, and other conditions.[10]

The huge rise in rates of autism has been connected by some people to use of vaccines, though this remains a matter of debate. In 2014, William Thompson, a long-time researcher at the Centers for Disease Control publicly stated that he had been involved in fraud to obscure a connection between the MMR (Measles, mumps & rubella) vaccine and autism.[11][12]

Thimerosal is still widely considered save by health organisations.[13] Safety concerns have forced to reduce its usage although that is not publicly acknowledged in such a way.[14] Studies have been published that show a link between autism spectrum disorders and high levels of ethylmercury used as a preservative in a number of childhood vaccines.[15][16] See also Eli Lilly further below.

Some polio vaccine produced in the USA between 1955 and 1961 (and possibly later) was contaminated with the Simian virus 40 (SV40), which rarely causes disease in monkeys. The US National Cancer Institute conceded in 2004 that SV40 does cause cancer in animal models, but claimed that "substantial epidemiological evidence has accumulated to indicate that SV40 likely does not cause cancer in humans". This is disputed by several researchers.[17][18] Vaccine contamination was probably just as severe worldwide, resulting in exposure to hundreds of millions of people.

An agent causing infertility was discovered in the tetanus vaccine used in Kenya 2014. This was informed by what had happened in Mexico, Nicaragua and Philippines where WHO/UNICEF had conducted similar campaigns using tetanus toxoid impregnated with beta HCG that causes production of antibodies against the natural HCG resulting in permanent infertility. [19] Despite Bill Gates openly promoting vaccines for controlling overpopulation, the commercially-controlled media blacked out the topic.

Also, there was no outbreak of tetanus in Kenya, only the perceived “threat” of tetanus due to local flood conditions, which corresponds neatly to the Bill & Melinda Gates Foundation's promotion of preemptive vaccination, "because we’ve seen first hand their incredible impact on children’s lives" (Melinda Gates). [20]

The US government in 2015 departed from standard practice to remove data revealing a marked rise in vaccine injury court cases since January 2014, at the same time as a website reorganisation obscured what statistics were still available.[21]

The FAQ of the WHO on global vaccine safety from 27. November 2019 explains that: "Some side effects are so rare they can’t be detected even after studying the effects of a vaccine on tens of thousands of people".[22] This entry on unknown side effects goes on to explain that there is monitoring in place to get all necessary data for evaluation and decision making. However, the vaccine critic Del Bigtree made a video cut of a WHO conference that took place shortly thereafter, on 2.-3. December 2019,[23] in which he showed that many experts that discuss the matter say that vaccine safety is getting a concern for health professionals in the field and that adequate monitoring indeed is not in place.[24][25][26]

Baxter International has notably demonstrated the dangers of vaccine production, and the power of big pharma to censor the commercially-controlled media.

Eli Lilly’s safety testing of it's product Thimerosal consisted of a 1929/30 study of 22 patients with terminal meningitis in an Indiana hospital. Patients were injected with solutions and followed until their death within weeks. Because the patients ultimately died of meningitis, they are declared to show no adverse reaction to Thimerosal and the product is declared safe for use. Thimerosal is subsequently introduced for use in vaccines to kill bacteria in the product and in over the counter remedies as a preservative.[27]

“Dan Burton: Has thimerosal ever really been tested? Has thimerosal ever been tested by our health agencies?
William Egan: Only in those early tests that you know of that were done by Lily.
Dan Burton: When was that? That was done in 1929. Let's followup on that. In 1929, they tested this on 27 people that were dying of meningitis. All of those people died of meningitis, so they said there was no correlation between their death and the mercury in the vaccines. That is the only test that's ever been done on thimerosal that I know of. Can you think of any other?
William Egan: No, in people, no. Except for accidental exposures over time.
Dan Burton: So we have mercury that's being put into people's bodies in the form of this preservative, and has been since the 1930's, and it's never been tested by our health agencies. And yet you folks come here and you testify that there's no conclusive evidence, and the IOM says, they favor, get this, they don't say they're sure, they say they favor rejection of a causal relationship between mercury and autism and other neurological disorders. Nobody ever gives a categorical statement, that no, mercury does not cause this, no, it doesn't. And that's because you can't do it. So why in the world are we even putting a little bit of it in vaccinations?”
Dan Burton,  William Egan (SEPTEMBER 8, 2004)  [28]

In 2018 Time magazine posted an article entitled 40% of Americans Don’t Plan to Get a Flu Shot. They’re Putting Others at Risk. Their video announced "It's flu season, which means it's time for your annual vaccine shot".[29]

Vaccination used to be optional but in the US at least is increasingly being made mandatory. In May 2019, Maine joined California, West Virginia and Mississippi in becoming " the fourth state in the nation to prohibit people from opting out of immunization for religious or philosophical reasons."[30] In October 2017, the US government jailed a mother in Detroit for her failure to cooperate with its vaccination policy.[31]

Various national governments have legally required their citizens to be vaccinated.

Until June 2016, California recognised personal beliefs to the except that they may offer an exemption from otherwise mandated vaccines. Reporting on vaccination rates in California, CNN reported in December 2015 that "Vaccine exemption percentages were higher in mostly white, high-income neighborhoods such as Orange County, Santa Barbara and parts of the Bay Area."[32] In June 2015, California was passing legislation to ban unvaccinated kids from attending public schools.[33]

2015 Push towards US legal requirement

In February 2015 the US Department of Health and Human Services announced "The Adult Immunization Plan" which aims "to reduce racial and ethnic health disparities includes a measure to increase the percentage of the minority population who receive the seasonal influenza vaccination." It also stated that "All healthcare professionals must ensure that adult patients are fully immunized." It was criticised by some as being a step towards compulsory immunization.[34]

Natural News reported on March 1st 2015 that "A WhiteHouse.gov petition calling for the prohibition of laws requiring mandatory vaccines has been throttled by the White House, buried from public view and finally frozen for over 36 hours to prevent the petition from achieving 100,000 signatures". The tactic appears to have failed as by March 4th, the petition had over 111,000 signatures.[35]

"This article on vaccines is terrible, and promotes anti-science," Gareth Andrew Coleman, post-graduate Geology student at Bristol University, wrote on Facebook about this webpage.[36]