The "Anti-vaxxer" is an enemy image created by Big Pharma. The word was first registered by a dictionary in 2008[1], although the meaning has expanded since then to include opposing coerced injections. The implicit meaning is that the person so described is against an object, i.e. "the vaccine" and not the process by which the product emerged or who in general believes that drugs should be safe.

In the end, everyone will have to be vaccinated; even the anti-vaxxers will realize that they will either get vaccinated or die.[2] 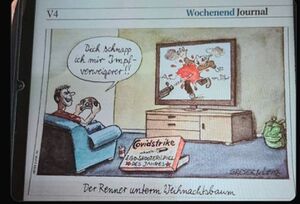 By November 2021 the corporate media tone had descended to barely concealed incitement to violence. This German newspaper cartoon (Augsburger Anzeiger) showed Covidstrike, the hot Christmas gift of the year, where the player is saying "I'll get you vaccine-refuser!!"

The Washington Post stated in 2021 that "Anti-vaccine extremism is akin to domestic terrorism".[3]. As of July 2021 Miriam Webster defined "anti-vaxxer" as "a person who opposes vaccination or laws that mandate vaccination".

In November 2021, Dr. Robert Strang, Nova Scotia's chief medical officer of health stated: "To those who could be vaccinated but aren't, who are only focusing on themselves, believing misinformation and false narratives, and more and more are acting with inappropriate anger, shame on you".[4]

According to a psychologist, "their brains work differently"[5]. Certain personality traits are linked to reluctance to obtain a Covid-19 jab, specifically psychopathy, Machiavellianism and collective narcissism, as these traits have previously been linked to heightened conspiracy mentalities.[6]

In December 2021, Canada's Prime Minister Justin Trudeau declared that people who do not get vaccinated against COVID-19 don’t believe in science/progress and are very often misogynistic and racist. "It’s a very small group of people, but that doesn’t shy away from the fact that they take up some space...This leads us, as a leader and as a country, to make a choice: Do we tolerate these people?"[7][8]

A 2022 Australian study concluded that covid-jab side effects are caused by stress-inducing anti-vax propaganda. Since the jabs have been proven "safe and effective", but also reported adverse events after jab are also at an all-time high, the adverse reactions must be caused by mental stress from "anti-vax misinformation".[9][10]

In 2022, a team led by Duke University Psychology Professor Terrie Moffitt "sought to understand" why some people opposed Covid-19 jabs by tapping into a rare, five-decade cohort study spanning childhood to midlife. "Forty years ago, vaccine-resistant and to a lesser extent vaccine-hesitant adults were exposed to significantly more adverse childhood experiences marked by abuse, neglect, threat and deprivation,” the paper said, while also showing higher “negative emotionality” during adolescence than their vaccine-willing peers. The researchers added that “many vaccine-resistant and hesitant participants had cognitive difficulties in comprehending health information”.[11][12]

A 2022 study from Sunnybrook Research Institute found that "COVID vaccine hesitancy" was associated with increased traffic crash risk. "Our study demonstrated traffic risks were 50%-70% more frequent for adults who had not been vaccinated compared to those who had." The study authors recommend that individuals who hesitate to take the COVID-19 vaccine reflect on their choices and recognize how such decisions have repercussions in ways they do not imagine, and that "Physicians counseling patients who decline COVID-19 vaccination could consider safety reminders so their patients do not become traffic statistics."[13] 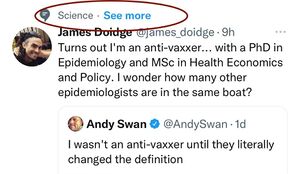 On the question of COVID-19 Vaccines, Jane Orient, Association of American Physicians and Surgeons (the majority of whom had not received two such injections), stated:

“It is wrong to call a person who declines a shot an "anti-vaxxer". Virtually no physicians are "anti-antibiotics" or "anti-surgery", whereas all are opposed to treatments that they think are unnecessary, more likely to harm than to benefit an individual patient, or inadequately tested.”
Jane Orient (July 2021)  [14] 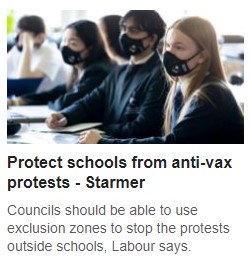 The BBC reporting what Keir Starmer wants to do about these protests.[15]

In September 2021, the BBC reported that fake NHS letters were being circulated at schools by "anti vaxxers".[16] In October it as reported in the North East.[17]

In November 2021, The Guardian published an "anonymous" article titled ICU is full of the unvaccinated – my patience with them is wearing thin in which they lambast people who choose not to have the jab.[18]

In the US, vaccine refuseniks are more likely to come from well-educated and higher income areas than non-refusers. Unvaccinated children tended to be white, to have a mother who was married and had a college degree, to live in a household with an annual income exceeding 75,000 dollars, and to have parents who expressed concerns regarding the safety of vaccines and indicated that medical doctors have little influence over vaccination decisions for their children.[20]