Dr John Pombe Magufuli was the president of Tanzania. He was widely criticised by commercially-controlled media after questioning the WHO's narrative about COVID-19.[1] In February 2021, The Guardian headlined an article It's time for Africa to rein in Tanzania's anti-vaxxer president, and the next month he died, reportedly of heart failure.[2]

Deutsche Welle reported that "His hands-on war against corruption was admired not just in Tanzania — but the entire continent.".[2]

“The negative coverage of President Magufuli is a very recent phenomenon. Early in his Presidency he even received glowing write-ups from the Western press and Soros-backed think tanks, praising his reforms and calling him an “example” to other African nations.

All that changed when he spoke out about Covid being hoax.

When he was re-elected in October 2020 the standard Western accusations of “voter suppression” and “electoral fraud” appeared in the Western press which had previously reported his approval rating as high as 96%.”
Kit Knightly (12 March 2021)  [3]

Magufuli sent the WHO a variety of non-human samples for COVID testing.[4][5] The samples of a goat, a papaya and a quail were to be tested for COVID-19. All 3 were judged to carry the virus.[1] His comment at the time was that the equipment or people may be compromised, and sometimes it can be sabotage, since they are otherwise capable to detect diseases reliably.

“Everybody in the Covid trenches felt the shock death to be connected to Magufuli’s provocation to the global Covid industrial complex last May, when he covertly had non-human samples — from fruits, goats, sheep, and car oil — tested for Covid on the PCR test, returning positive results from a paw-paw, a quail, and a goat. With humor, cheek, and audacity, Magufuli had crossed a line—exposing the fraud and illegitimacy of the PCR testing apparatus that the WHO relied on to justify the global lockdown, the terror, and the vaccine rollouts. After the disturbing results came in, Magufuli suspended the head of Tanzania’s National Health Laboratory, Nyambura Moremi, and formed a 10-person investigative committee. The EU had given Tanzania 27 million Euros to impose strict Covid lockdown measures, but along with the Presidents of Belarus and Burundi, Magufuli kicked the WHO out of his country.”
Celia Faber (19 March 2021)  [6]

Magufuli was a "close friend" of Pierre Nkurunziza, who also refused to order a lockdown in response to COVID-19[7] and who also died suddenly, reported of a "heart attack".

In January 2021, John Magufuli publicly warned citizens that the COVID jabs were dangerous.[8] 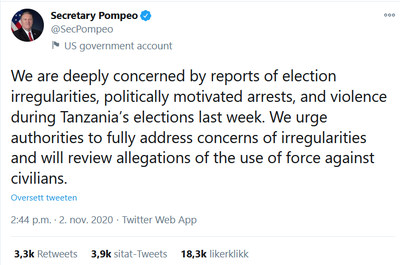 After the 2020 October 28th Tanzanian election, the pressure from Washington DC increased, an indication the US did not achieve its desired outcome. The US State Department[9] soon claimed that “significant election-related fraud and intimidation” and called for an election re-do.[10]

From The Guardian and WHO

In February 2021, The Guardian carried a story about Magufuli entitled It's time for Africa to rein in Tanzania's anti-vaxxer president.[11] by Vava Tampa. The story was sponsored by the Bill and Melinda Gates Foundation. Tampa's obituary for Pierre Nkurunziza was subtitled "President of Burundi whose 15-year rule was ultimately marked by violence and repression". The same month, Tedros Ghebreyesus urged Tanzanian authorities take “robust action” against the virus.[12]

In February 2021 a "spate of deaths attributed to “pneumonia” and “respiratory challenges” has struck both government officials and members of the public."[13]

John Magufuli reportedly died of heart failure in March 2021, after being admitted to hospital on 6 March.[2][14]