In August 2021, the large-scale evacuations of foreign citizens and some vulnerable Afghan citizens took place amid the Afghanistan/2021 withdraw.

“There's so many people arguing about the withdrawal from Afghanistan blaming Trump, blaming Biden. 'Oh we should withdraw like this'. No no there's only one way to withdraw it's called get the f*** out of Afghanistan. Okay people in the west need to stop with this colonial mindset thinking they can just invade countries kill people stay there for 20 years and then act like they are the victims at Kabul Airport.”
Richard Medhurst (27 August 2021)  [1]

The last remaining UK troops have been flown out of Kabul airport, ending Britain's 20-year campaign in Afghanistan.

It comes as the last dedicated flight purely for the evacuation effort left the Afghan capital last night[2] - ahead of the 31 August deadline set by Joe Biden for American forces to withdraw.

Operation Pitting has now ended, with the UK evacuating 15,000 people from Kabul in a fortnight - including 5,000 British nationals and more than 8,000 Afghans who worked for the UK, and their families, as well as many highly vulnerable people.[3] 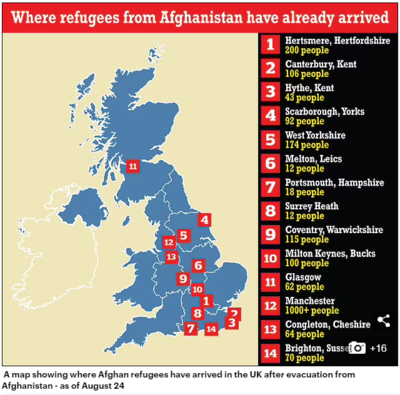 Where in Britain Afghan refugees have been gone to by 24 August 2021.