Russophobia is a the irrational fear of Russia. It has a long history. It enjoyed it most recent peak at the hand of the Institute of Statecraft.

“The complete and unmitigated irrationality of the current epidemic of Russophobia does nothing to reduce its incredible virulence, as it continues to infect the entire political and media class. There is a zero chance that Russia will launch an attack on the UK, yet the entire corporate and state media is leading today with the “need” to spend billions against that most unlikely threat.”
Craig Murray (22 January 2018)  [1]

“RF is not a “normal” country in most senses of the word. Crucially, Russians see life & the world very differently from us. While economics is of course important to them, in the broadest sense Russians are not nearly as driven by economic & financial considerations.”
(13 January 2015)  [2]

Stephen Cohen asked in 21st Century Wire on 5 April 2018 Why are Western Leaders & Media Conditioning Their Public to Hate Russia?[3] On 5 November that year, Anonymous leaked documents about the Integrity Initiative which used UK taxpayer funds to create anti-Russian disinformation.[4][5][6] 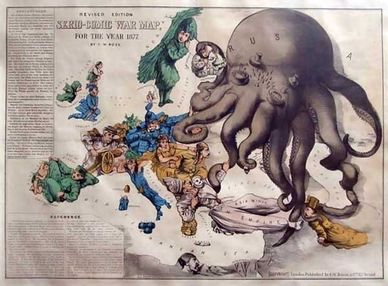 A Russophobic cartoon from the 1870s

The Cold War was a phase of history after the end of World War II, until the 1990s.

Cold War II is a 21st century phenomenon, possibly reflecting the desire of the MICC to boost weapons expenditure. Vladimir Putin criticized the painting of Russia as enemy image.

“A superpower is a cold war term. When people today say that Russia aspires to have this status, I interpret it in the following way: they want to undermine trust in Russia, to portray Russia as frightening, and create some kind of image of an enemy. … Russia is in favor of a multipolar world, a democratic world order, strengthening the system of international law, and for developing a legal system in which any small country, even a very small country, can feel itself secure, as if behind a stone wall. … Russia is ready to become part of this multipolar world and guarantee that the international community observes these rules. And not as a superpower with special rights, but rather as an equal among equals.”
Vladimir Putin,  Kremlin,  Russia (2007)  [7]