Dr Tim Sweijs was, as of March 2021, "the Director of Research at the Dutch think tank The Hague Centre for Strategic Studies". Sweijs is presented as a specialist in researching and creating numerous studies, methodologies, tools for horizon scanning, early warning, conflict analysis, national security risk assessment, and strategy and capability development.[1]

Sweijs became part of the research staff of NATO’s Parliamentary Assembly in Brussels in 2006 and became Adviser Technology, Conflict and National Interest to the UK Government’s Stabilisation Unit in 2019. In between, Sweijs was a researcher at Netherlands Organization for Applied Scientific Research Defence and Security-division in The Hague and became a Senior Research Fellow at the Netherlands Defence Academy and an Affiliate at the Center for International Strategy, Technology and Policy in the Sam Nunn School of International Affairs at the Georgia Institute of Technology. Sweijs has three degrees in War Studies, International Relations, and Philosophy from King's College, London, and the University of Amsterdam.[2] 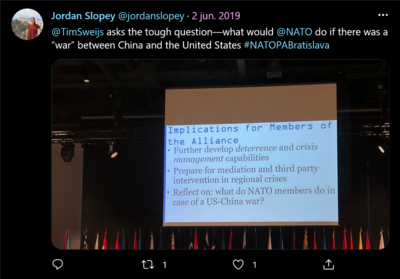 Sweijs his main research interest concerns the changing character of contemporary conflict. In the spring session of the NATO meeting in Bratislava, Slovakia, Sweijs was a panel speaker where he pushed to "develop influence capabilities" (an eerie similar target of the Integrity Initiative), along with a segment "what would NATO do if there was a “war” between China and the United States", suggesting NATO countries conspire and prepare for this Cold War 2.0 separately from the US.[3]

Sweijs appears to work together to "institutionalize knowledge" with high-ranking officers of the Dutch Army.[4]

At the end of the 2010s, Sweijs appeared in a series of podcasts[5] on Dutch government-funded radio. TV and newspapers discussing what he saw as a future vital piece of first-line defense in wars and at important places on home soil: Lethal autonomous weapons. Along with arguing Vladimir Putin using these weapons around their own military and political buildings (seemingly that shouldn't bother an entity big as NATO if a pre-emptive strike is not on the future-menu, one would think), Sweijs also was steadfastly warning for the protection of installations such as oil wells as the main reasoning given in countries struck by the War on Terror, in particular Yemen, being supported by Dutch Defence Minister Ank Bijleveld. In 2017 Sweijs was also a pundit for Dutch public broadcaster NOS warning of Artificial intelligence, but implying countries, regions and even neighborhoods could face direct pre-emptive "intervention" by analysing AI and data, seemingly handing over even more freedom in exchange for "non-massive military action".[6]

Along with Clingendael, Sweijs warned that several countries could blame other nations for Covid-19 by being pressured to do something when losing grip and authority as death rates will increase. This article warned it becoming a new 9-11.[7]

Sweijs worked together at the HCSS with Katarina Kertysova. Kertysova appears to have been discovered at the Institute of Security and Global Affairs located in The Hague that works with the University of Leiden and left for the European Leadership Network and The Wilson Center. Sweijs also worked with Koen van den Dool who was also a student at Leiden University. Van den Dool was an assistant Analyst for the Cyber Policy and Resilience Program. Van den Dool left the HCSS to work for the Dutch Ministry of Justice and Security where he became secretary of the evaluation commission for the new mass surveillance bill for the AIVD that was enacted by the Mark Rutte administration even after being rejected after a Dutch (consultative) referendum in 2017. Many papers made by Sweijs are targeted at Russia and China.

“The Russian aggression in Crimea has deeper roots. The Russian forces are being transformed from a big group of army conscripts to smaller, agile modern units. Underneath that is also the militarization of society. There are TV-channels that don't broadcast 'The Voice', but competition between tank-divisions on some trail.”
Tim Sweijs (11 June 2015)  [8]

Sweijs worked together with Katharine Klačanský, who was a conference organizer for the conference "Answering Russia's Strategic Narratives", where the Dutch cluster of Integrity Initiative was formed. Several of Sweijs his former researchers named in papers during the months the Dutch cluster was set-up have since deleted their Twitter accounts, for undisclosed reasons. 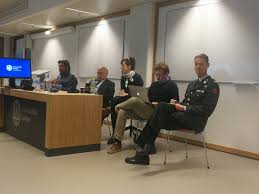 Klačanský wrote on her deleted Twitter account; "Attending a debate with top academics and experts in the field of #PoliticalScience, #internationalsecurity, and #militarystrategy. On the panel includes my ex colleague @TimSweijs from the HCSS".

“In Lithuania, they've now switched to developing 'alternative narratives that the Lithuanian Ministry of Defence is developing together with the ministries of education and culture. If I ask Raimundas Karoblis if that isn't a form of utilizing propaganda, he answers resolute but semantically: 'It's about an alternative narrative'.”
Tim Sweijs (29-11-2017)  [9]