From Wikispooks
(Redirected from Yale)
Jump to navigation Jump to search

Yale University is home of the most influential US student society, Skull and Bones, and of two other senior societies[1] Scroll and Key and Wolf's Head. In his expose, America's Secret Establishment, Antony Sutton suggests that all three may in fact be closely aligned in purpose.

Skull and Bones is a secret society that has admitted 15 senior year students annually since it was founded in 1832[2]. Within 50 years, the group had effective control over the finances of Yale University. It continued to increase its influence, becoming an organ of great importance to the US deep state. Its continued importance in US deep politics is illustrated by the fact that the 2004 US Presidential election was a choice between two bonesmen:- John Kerry and George W. Bush. 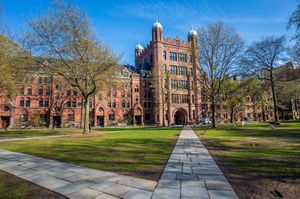