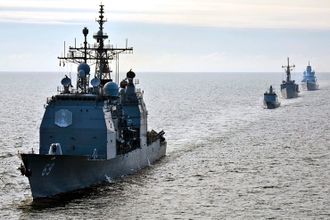 On the 22nd of October 1962 the US 2nd Fleet began the blockade of Cuba, an action that immediately threatened the world with nuclear war and annihilation. Those of us old enough to remember President Kennedy’s statement on live television will never forget the fear we all felt as the images of mushroom clouds swept across the TV screens and air raid sirens began their haunting screams as we were told to “duck and cover.”

The blockade’s objective was to force the USSR to withdraw nuclear weapons from Cuba that it had placed there in order to guarantee Cuba’s security from American attack. Fortunately the crisis ended a few days later with the missiles being withdrawn in exchange for the US withdrawing similar missiles from bases in Turkey that threatened the USSR, and a US pledge not to invade Cuba. The blockade proved to be not only a dangerous provocation but also a humiliating fiasco for the US. A year later President Kennedy was assassinated.

But today the US leadership is threatening another blockade, this time of Russia, as well as threatening pre-emptive strikes to neutralise Russian cruise missiles, not located in Cuba, but in Russia itself. And the same fleet that conducted the Cuban blockade, that took part in the invasion of Grenada in 1983, the 2nd Fleet, has once again been reactivated with all the ships necessary to attempt just such a blockade.

The 2nd fleet was broken up in 2011 when the US thought it controlled the world and decided it was not needed. Today it has been reassembled to threaten Russia once again, a Russia that refuses to acknowledge US world hegemony and or permit US control of it or its allies sovereignty, economies and resources. Based in Norfolk, Virginia, the fleet’s declared mission is to “help protect the sea lanes between the United States and Europe, as well as to help allies deal with increased Russian military activity in the Greenland-Iceland-UK gap.”

It was agreed at the NATO Summit in Brussels that the 2nd Fleet will also become a NATO command should hostilities break out. It is so important to them that the NATO officer commanding the massive Trident Junction military exercises taking place in Norway this month is an American admiral, Admiral James Foggo, who also serves as NATO’s commander of Joint Force Command in Naples.

The Trident Junction war games posit an imaginary invasion of Norway by Russia. Since such an invasion is not conceivable it must be assumed by Russian military planners and neutral observers, by any intelligent person, that the exercise is meant to be major provocation against Russia, a threat, for to put 40,000 men, 70 major ships, including a nuclear aircraft carrier strike group, and hundreds of aircraft into Norway, a major effort in logistics and planning is not just to show Russia NATO’s capabilities. It’s a practice for the real thing.

As I wrote in an earlier article the threat of a naval blockade of Russia to stop its exports of energy, the threat made by the US Interior Minister, Ryan Zinke, seems absurd. Most of Russia’s energy exports are by pipeline but a significant amount of liquefied natural gas is now shipped from its new Yamal LNG plant in northern Russia on the Arctic Ocean to markets in Venezuela, India and China and large amounts of oil are shipped out of ports in the Baltic, the Black Sea and from Vladivostok. In fact Russia exports millions of barrels of oil to US west coast consumers which cannot obtain domestic US or Canadian oil as easily as in the past due to lack of pipelines from currently producing fields in the US and Canada. This reliance on Russian oil is anathema to the American strategic planners, yet a blockade of that oil supply would raise oil prices to very high levels, hurting US consumers while helping Russia increase its revenue. Some US oil companies would benefit from higher prices, if there was no war, of course, but not as much as Russian companies in this scenario, so again, the threat seems as stupid as it is reckless, because it would not benefit the US and would lead to war. So why make it? And why make the threat shortly thereafter of a preemptive strike on Russia to “take out” Russian defence systems?

The US ambassador to NATO, Bailey Hutchinson, stated on 2 October 2018:

“The question was what would you do if this continues to a point where we know that they are capable of delivering the weapons in question. And at that point we would then be looking at a capability to take out a missile that could hit any of our countries in Europe and hit America in Alaska.”

US commentators tried to play down what she said and she later tried to tone down her remarks but the threat was not withdrawn and we have to consider that she spoke for senior NATO commanders as she has a long pedigree working with them and must know what they are thinking and what they are planning. She was a US senator from Texas from 1993 to 2013 and during her term in office was a member of the Senate Armed Services Committee and various other defence and military subcommittees. She has a pedigree and she has connections. Many have shrugged off her remarks as stupid or over the top, but to shrug her off as a joke is a mistake. The Russian government took what she said seriously and stated that she was engaging in dangerous aggressive rhetoric while the head of the Arms Control Association stated:

“If she is saying that if the diplomatic route doesn’t work we will destroy the missiles, that’s obviously dangerous and risks triggering a war that could go nuclear. I cannot recall anything like this in the post cold-war period.”

But then NATO has risked starting world war before, first with the Cuba Crisis, then when they attacked Yugoslavia in 1999 and, by trying to kill the Chinese Ambassador in the process, attacked China as well. They even brag about it. The Mr Goebbels of NATO, Jens Stoltenberg, in Belgrade a few days ago, told university students that they were bombed for their own good, so ipso facto any bombing NATO does of anyone is therefore for their own good, and therefore “necessary.” The megalomania is astounding.

And while the build-up and threats against Russia mount in the Baltic, in Ukraine, in Syria, and as threats against Iran mount, against North Korea, Venezuela, threats against China mount with rapidly increasing economic warfare, with new accusations that China is also trying to influence US elections, with over flights of Chinese waters by nuclear-capable bombers, incursions of US and allied military vessels in Chinese waters leading to direct confrontation, and threats of a blockade of the Malacca Straights cutting off China’s oil supplies from the Middle East. The war in Syria continues, with the US, Israel and their various national and mercenary allies not willing to accept defeat. War or threats of war by the US and its allies against the powers resisting its hegemony is the constant theme of their leadership and their media. In whichever direction you look, you cannot escape the images of war or news of war.

So why would they take the risk of a naval blockade, the risk of a pre-emptive attack? It is clear that the economic warfare being conducted against Russia is not working and has only served to make Russia more independent and self-sustaining. Threats of further economic warfare in the form of punishment of its European allies if they buy Russian energy supplies, in tandem with the same measures against Iran, will mean the ruin of Europe for those countries really have no alternative except unreliable and very expensive US natural gas delivered by sea. So a naval blockade preventing Russian ships from delivering their cargoes is a logical step in their thinking, which is focused on destroying Russian economic and military power.

The other reason they would risk it is that the NATO leadership are in love with war. They worship war. It gives them, they think, what they desire; power and they want world power. They mean to take it and they mean to keep it. They enjoy frightening people. They enjoy the killing. It gives them a thrill talking about it when they sit down in their comfortable chairs and have their cocktails after a hard days war. So it cannot be assumed that the statements they make, the threats of blockade, of pre-emptive strikes, of nuclear first strikes, are just so much chatter, so many stupidities. They are evidently a set of psychopaths, like Hitler and the Nazi leadership were. They think they are omnipotent and are willing to risk everything, as they did, because they have deluded themselves into thinking that it is possible to win, to survive, and to profit from the war they are preparing for. We can pretend it’s all just bluff and loose talk, or we can take it seriously and wake up to the reality of where they are taking us and try to stop them before it’s too late. But we haven’t too long. The 2nd Fleet is ready for action. Are we?

Retrieved from "https://wikispooks.com/w/index.php?title=Document:On_Naval_Blockades_and_A_Hard_Days_War&oldid=148503"
Categories:
... more about "Document:On Naval Blockades and A Hard Days War"
RDF feed
Constitutes
Article +
Description
The NATO leadership are in love with war. They enjoy frightening people. They enjoy the killing. It gives them a thrill talking about it when they sit down in their comfortable chairs and have their cocktails after a hard days war. +
Display docType
Article +
Display image
File:US_2nd_Fleet.jpg +
Display image2 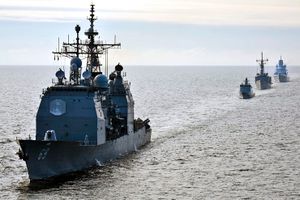