From Wikispooks
(Redirected from ADL)
Jump to navigation Jump to search

The Anti-Defamation League of B'nai B'rith (ADL) was founded in 1913 by B'nai B'rith International. It describes itself as "the world's leading organization fighting anti-Semitism through programs and services that counteract hatred, prejudice and bigotry."[1]

While it started out investigating "anti-Semitism", since the 1980s it infiltrated and spied on groups which criticised both Israel and the Apartheid government in South Africa. In 2018, it claimed that over 1 billion people harboured "antisemitic" attitudes.[2]

The ADL was established in New York City in 1913 to defend Jews, and later other minority groups, from discrimination. It led the fight against racist and fascist groups like the Ku Klux Klan and the American Nazi Party, and in the 1960s championed the civil rights movement.

But there was also a darker side. In the late 1940s, the ADL spied on leftists and Communists, and shared investigative files with the House Committee on Un-American Activities and the FBI. The ADL swung sharply to the right during the Reagan administration, becoming a bastion of neoconservatism. To Irwin Suall, a repentant Trotskyite who heads the ADL's powerful Fact Finding Department, the real danger to Jews is posed not by the right — but by a coalition of leftists, blacks, and Arabs, who in his view threaten the fabric of democracy in America, as well as the state of Israel. In the tradition of his ideological soulmate William Casey, Suall directed the ADL's vast network of informants, who were given code names like "Scumbag," "Ironside," and — for a spy reportedly posing as a priest in Atlanta — "Flipper."[3]

'In 1993', write Jeffrey Blankfort, Anne Poirier and Steve Zeltzer, 'the District of Attorney of San Francisco released 700 pages of documents implicating the Anti-Defamation League, an organization that claims to be a defender of civil rights, in a vast spying operation directed against American citizens who were opposed to Israel's policies in the Occupied West Bank and Gaza and to the apartheid policies of the government of South Africa and passing on information to both governments.'[4]

The ADL's original focus on attack on Jews and minority ethnic group gave way in the 1980s to an approach which involved the ADL spying on left and human rights groups. According to Robert Friedmann in the Village Voice:

In the early 1980s, researchers Russ Bellant and Berlet asked to meet fact finding head Irwin Suall, to discuss their work on anti-Semite Lyndon LaRouche. "Our view then of Irwin Suall was that he was this really terrific investigator," says Berlet. "So we introduce ourselves, say what we are up to and Suall leans back in his chair and basically runs down a dossier on each of us: about what our political activities are, who we work with, what organizations we belong to. Obviously, he was just trying to blow us away and he succeeds admirably. We were just sitting there with our mouths open feeling very uncomfortable."

"And then he leans forward and says, 'The right-wing isn't the problem. The left-wing is the problem. The Soviet Union is the biggest problem in the world for Jews. It's the American left that is the biggest threat to American Jews. You're on the wrong track. You're part of the problem.' We were stunned. I was virtually in tears. This is not how I perceived myself. We basically stumbled out of there in a daze."[5] 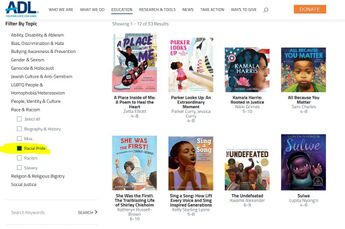 Since 2000 the ADL has maintained a lists of "hate symbols". The list on the group's website included icons, gestures and numbers (for example, 12, 13, 14 & 28). The ADL was criticised in 2019 after adding the American Sign language symbol for "OK" to its list. The ADL claimed that the gesture was "in some circles as a sincere expression of white supremacy".[6]

The ADL engages and advocates for cancel culture.

in 2016 the ADL labeled Christopher Bollyn an "Anti-Semitic Conspiracy Theorist".[8]

A Document by Anti-Defamation League

A Anti-Defamation League victim on Wikispooks

A document sourced from Anti-Defamation League