The British-American Project (BAP) is a transatlantic fellowship of over 1,200 leaders and opinion formers from a broad spectrum of occupations, backgrounds and political views. The purpose of the network is to groom a cadre of reliably pro-American British politicians, especially on the left side in politics, or as the 1985 conference put it, “to create, at a time of growing international strains and stresses, a closer rapport between Britain and the United States among people likely to become influential decision-makers during the next two decades” [1]

BAP operates on a not-for-profit basis, funded through its membership and support from corporate partners. It was originally named the British-American Project for the Successor Generation[1], and was founded in 1985 [2]. From 2006, it became a Private Limited Company[2]. 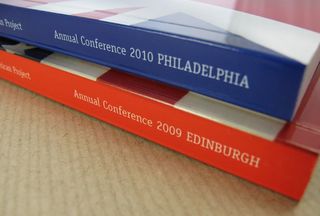 The BAP meets annually for a four-day conference on a topic of current concern to both countries. Each year, roughly 24 new participants are selected from either side of the Atlantic, on the basis of service to their communities and professional achievement, and sponsored to attend the conference as delegates. At the end of each conference, Delegates are elected Fellows of the Project. Fellows from past years attend the annual conferences at their own expense, with many returning in successive years.[3]

The conference has a main conference brochure, which outlines speakers and schedules. In addition, they print a biographical book, a comprehensive and compact guide to who’s who at the conference. It’s divided into four sections; UK Delegates, US Delegates, UK Fellows, US Fellows and each page is an individual biography.[4]

Many BAP alumni are directly involved with US and UK military and defense establishments.

The supposedly left-liberal association holds an annual JP Morgan lecture, given by David Cameron in 2006.[5]

Members used to joke of CIA-funding

A Guardian article from 2004 described the purpose of the group:

Here, BAP is portrayed as a Trojan horse for American foreign policy, recruiting Britons of liberal or left-of-centre inclinations and political talent and connections when they are young, indoctrinating them with propaganda about the virtues of American capitalism and America's role in the world, and then watching them approvingly as they steer British politics in an ever more pro-Washington direction. According to this analysis, the project's greatest success has been New Labour.[3]

The leftwing journalist John Pilger, who has been uncovering American manipulation of other countries' politics for decades, has described BAP as a "casual freemasonry" and "by far the most influential transatlantic network of politicians, journalists and academics".

The historian Frances Stonor Saunders, who has written extensively about the American use of earlier, similar networks to influence western opinion during the cold war, sees close parallels with BAP: "All that's changed is that BAP are much more sophisticated." Member Yasmin Alibhai-Brown said: ""The amount of drink, the way you were treated, the dinners with everyone who was anyone..... It was money that I'd never seen at any conference before. We [the participants] used to joke, 'This is obviously funded by the CIA.'"

BAP-member Martin Vander Weyer admitted: "The British membership is quite a concentrated elite," he admits. "There was a stage where ... a lot of the people who emerged as part of the New Labour leadership group happened - and I say happened, because it is partly chance - to be members of BAP ...[6]

British and US members

Given the number of members, this is an incomplete list. Especially British politicians, aware that participation is potentially incriminating, carefully leave membership in the BAP out their CVs. Nevertheless, because of the Project's secrecy, the list on Wikispooks is the most complete compilation existing in public today.

Members (mostly UK, some US) of the British-American Project include (2004):

This page imported content from Wikipedia on 10 June 2019.
Wikipedia is not affiliated with Wikispooks.   Original page source here
Retrieved from "https://wikispooks.com/w/index.php?title=British-American_Project&oldid=233230"
Category: