On 14 July 2016, several major media outlets reported that Trump had selected Indiana Governor Mike Pence as his running mate. Trump confirmed these reports and made the announcement two days later in New York.[5][6][7][8][9] On July 19, the second night of the Republican National Convention, Pence won the Republican vice presidential nomination by acclamation.[10]

Former Secretary of State and New York Senator Hillary Clinton became the Democratic Party's presidential nominee on 26 July 2016 after defeating Vermont Senator Bernie Sanders. On July 22, three days before the start of the Democratic National Convention, the Clinton campaign announced that Virginia Senator Tim Kaine had been selected as her running mate.

Two other candidates contested the election: the Libertarian Party nominee, former Governor of New Mexico Gary Johnson; and the [US/Green Party]] nominee Jill Stein.[11][12] They were marginalised by the commercially-controlled media.

Bugging and Infiltration of Trump campaign 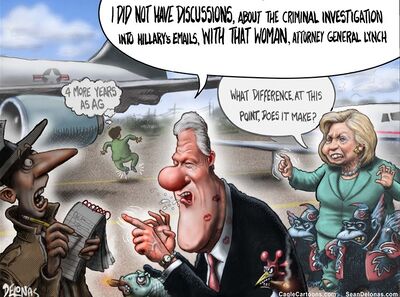 A cartoon by Sean Delonas highlighting the "backroom" deals that were going on at the time; Bill Clinton having a private discussion with U.S. Attorney General Loretta Lynch at the Phoenix Airport, end of June 2016.[14] The journalist, Christopher Sign, who reported on the meeting that otherwise would have gone unnoticed, dies in June 2021.[15][16]

[18]. The campaign also was infiltrated and bugged by foreign intelligence services. The British was used as a cut-out to justify this surveillance. According to CNN, "British and other European intelligence agencies intercepted communications between associates of Donald Trump and Russian officials and other Russian individuals during the campaign and passed on those communications to their US counterparts"[19], as part of the Five Eyes program. Internal spying is sometimes illegal in Five-Eyes countries, so the secret services creates a fig-leaf for this, by allowing allied services to do that part of the job. In this case they came up with the Steel dossier, and used Alexander Downer and Stefan Halper in an attempt to entrap and recruit Trump campaign workers[20].

Declassified FISA documents from 2020 revealed how this system to create legal fig-leafs works. The FBI relied completely on media reports that were inaccurate[21][22] ( a Josh Rogin op-ed in Washington Post[23] and a Michael Crowley article in Politico)[24], to “assesses that, following Page’s meetings in Russia, Page helped influence the Republican Party and Trump’s campaign to alter their platforms to be more sympathetic to Russia.”

Hillary Clintons handling of email communication would have lead invariably to prosecution and most likely sentencing of any other individual. It has been suggested that enabling foreign governments to get access to classified information is a scheme by her and the Clinton foundation to get donations from foreign governments/actors.[citation needed] James Comey closed the investigation but nearing election day opened it again,[25] to shut it down shortly thereafter; reminding the population at large what kind wrong doing she is guilty off, for which she won't be touched. Wikipedia's page on Hillary Clinton, as of Oct 2021, notes:[26]

Leaks and hacks (among other things) lead to the notion of "Russian interference in the 2016 United States elections".[27]

Guccifer 2.0 is a persona which claimed to be the hacker(s) who gained unauthorized access to the Democratic National Committee (DNC) computer network and then leaked its documents to the media, WikiLeaks, and a conference event.[28] Bill Binney[29] and The Forensicator [30] believe that the data provided by this persona could not have been transferred over the Internet since the file timestamps indicate a higher speed on the storage location than is technically possible over the Internet.

DCLeaks (also known as DC Leaks) was a website that was established in June 2016. It was responsible for publishing leaks of emails belonging to multiple prominent figures in the United States government and military. The most prominent of those was the 2016 DNC email leaks.[31]

Jeff Schechtman has written that "the election and its aftermath has deepened a culture of fear in the United States."[32]

Large parts of the media were never in doubt of the outcome. The Trump victory came as a big psychological shock for the liberal establishment. 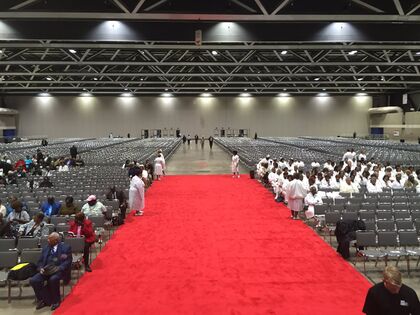 The official outcome of the election gives Hillary Clinton the popular vote, while the attendance of her speeches was noted to be scarce.

The additional FISA application declassifications reveal another disconcerting fact: The FBI relied completely on media reports that ended up being inaccurate to “assesses that, following Page’s meetings in Russia, Page helped influence [the Republican Party] and Trump’s campaign to alter their platforms to be more sympathetic to Russia.”

As in the 2000 and 2004 elections for George W. Bush and the 2020 election that unseated Trump, there are obvious signs of election fraud, interestingly both in the Democratic primaries for Clinton and in the runoff, for Trump.

Election fraud for Clinton over Sanders

As the campaign heated up, were endless talk of a possible outside interference (Russiagate), but this might have been a cover for the possibility of insider interference with the vote counting process — that is, by anyone with access to the programming and servicing of the equipment.[33]

While the exit poll results were consistently accurate throughout nearly all of the Republican primaries, they were wildly and broadly inaccurate in the Democratic primaries, exhibiting a pervasive intra-party shift to the detriment of Sanders (i.e., Hillary Clinton’s vote count percentages consistently exceeded her exit poll percentages, the disparity often far beyond the poll margin of error). It seems highly unlikely that the same pollsters employing the same methodological techniques and polling voters at the same precincts on the same days, would be competent and consistently successful with Republicans but somehow incompetent and consistently unsuccessful with Democrats.[33]

Election fraud for Trump over Clinton

Twitter confirmed that Bernie Sanders' tweet – questioning if Donald Trump is "running for president or dictator" – received the most retweets during Trump's acceptance speech.[34]

In May 2016, at the G7 summit in Japan, President Barack Obama reportedly said that international leaders "have good reason to be rattled" by pronouncements made by Donald Trump who had shown a cavalier and ignorant attitude towards world affairs. Trump said it was a "good thing" foreign leaders were rattled.[35]

Responding to the UK government's invitation to stay at Buckingham Palace on a State Visit in 2017, President-elect Trump reportedly said:

"First get Buck House suitably refurbished and have its electrics fixed, then I'd be honored to accept the kind invite."[36]

"Many people would like to see @Nigel_Farage represent Great Britain as their Ambassador to the United States. He would do a great job!"[37]