Yanis Varoufakis (Γιάνης Βαρουφάκης, Ioannis Georgiou) is a Greek economist. Elected on a promise of stopping the economic austerity forced on the country by the Troika (IMF, European Central Bank and the European Commission), his party promptly caved in and continued business as usual.

“The problem with capitalism is not that it is unfair but that it is irrational, as it habitually condemns whole generations to deprivation and unemployment and even turns capitalists into angst-ridden automata, living in permanent fear that unless they commodify their fellow humans fully so as to serve capital accumulation more efficiently, they will cease to be capitalists. So, if capitalism appears unjust this is because it enslaves everyone; it wastes human and natural resources; the same production line that pumps out remarkable gizmos and untold wealth, also produces deep unhappiness and crises.”
Yanis Varoufakis (18 February 2015)  [1]

Now what they do is something far worse. They accuse you of something that really hurts you. Calling somebody like us a racist, a bigot, an antisemite, a rapist. This is what really hurts because if anybody calls me a rapist today, right, even if it’s complete baloney, I feel as a feminist I have the need to give the woman, implied or involved somehow in this accusation, the opportunity to speak against me. Because that is what we left-wingers do.”
Yanis Varoufakis (6 January 2021)  [2]

Addressing a young man named Joel, in the 'Question Time' Sheffield audience, who posed the first question on the programme:

“Joel, the answer is really very simple - Theresa May.

"Look first, she triggers Article 50 on the basis of red lines that boxed her into impossibility.

“Secondly, and that is a crime against logic, she failed to recognise that Michel Barnier, when he announced the two-phase process, was issuing a declaration of hostility against the Government. May never even saw this coming.

“If I come to you and say let’s have a negotiation between us. And I say, first, you tell me everything you want. And then, secondly we will tell you everything we want.

"Clearly, you will say ‘No mate. I’m not going to have a negotiation with you along those lines.’

“Theresa May started that negotiation, and the result was effectively a deal - I disagree with my fellow panellists here - whether you are a Brexiteer or a Remainer, this is a deal a nation signs only after having been defeated at war.

“This is not a deal which is fit for purpose for any sovereign country.”[3]

Yanis Varoufakis made a powerful speech in support of the DON'T EXTRADITE ASSANGE campaign at a huge rally in London's Parliament Square on Saturday 22 February 2020:

"Leaking the guilty secrets of power is not a phrase, it is a sentence. And no one is facing a longer one today than Julian Assange.

"Julian has gained the right to quote another past prisoner, another enemy of Empire, Mahatma Gandhi.

"Like Gandhi, Julian could say: 'You can chain me, you can torture me, you can even destroy this body, but you will never imprison my mind.'

"He may very well say that.

"But WE don’t have the right to agree.

"We must NOT let THEM destroy his body.

"WE must END his torture.

"Because first they came for Julian. Then they will come for our comrades. Then our friends. Then our children. Then the good people working for The Guardian, the BBC – anyone who does not submit to the right of the powerful to carry out crimes against humanity in our name and without our knowledge.

"Dan Ellsberg and Noam Chomsky have warned journalists who fail to oppose Assange’s extradition to the US: You are next on the hit list of a President who considers you the 'enemy of the people.'

"When you turn a blind eye to Julian’s torture you consent to your own emasculation.

"Of course, by being here you have already proven that you know all this. That we know all this. It also means that you, we, have accepted the duty to let into the secret those who are not here.

"You see, Julian’s greatest enemy, the greatest enemy of freedom, does not come from evil men in smoke-filled rooms plotting against good people. No, rational, self-conscious evil is not the worst enemy.

"The worst enemy is apathy. It is the appalling silence of good people. Of tired people too exhausted and disheartened to have the energy to campaign for others. Fatigue is the enemy, the oligarchs’ greatest ally. Along with banality – with people in some authority, neither good nor bad, too banal to care. 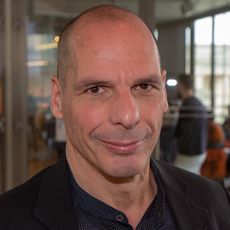 "I got to know Julian back in 2015 when he took an interest in me because I had exposed the way Europe’s finance ministers conspire against the interests of the people they represent.

"Our common project will see the light of day on March 10 – watch out for Euroleaks.

"Soon after we met, in February 2016, together with tens of thousands of European progressives, Brian Eno and Noam Chomsky included, we created the Democracy in Europe Movement 2025 (DiEM25).

"Today, I stand here to convey to you their solidarity from every nook and cranny of the European continent. From Germany. From Portugal, Spain, France, the Balkans, Eastern Europe, Southern Europe, Scandinavia. You may be out of the EU but we consider you more deeply embedded in Europe’s progressive movement than ever.

"Tomorrow I shall be visiting Julian in prison, alongside John Shipton – his remarkable father. I shall do my best to convey to him your spirit, the spirit of DiEMers from across Europe, the wishes of our Greek members of parliament who are staging a demonstration outside Britain’s embassy in Athens right now.

"Their message to Julian is: We are all Wikileaks. Each one of us is a tiny MeLeaks exposing abuse of power and letting light in wherever power seeks to grow in the darkness that makes it monstrous, hideous, misanthropic.

"As my friend, and Julian’s friend, Phillip Adams said recently, we shall not let them turn Julian into a latter-day Man in the Iron Mask, into the Man forgotten in an Iron Cell.

"So, stiffen your upper lip folks. We are here so that unarmed truth has the final word. So that Julian’s sentence ends neither with a bang nor with a whimper – but with a majestic, a marvellous full stop."[4]

On Monday 4 January 2021 at the Old Bailey, Magistrate Vanessa Baraitser ruled that Julian Assange should not be extradited to the United States on charges of espionage and computer hacking. Yet despite that verdict the Judgment arguably represented a blow to freedom of the press - with the Judge accepting the substance of the case made by the US State Department.

On 5 January 2021 on Downstream, Aaron Bastani is joined by Yanis Varoufakis, former Greek finance minister and prominent supporter of Julian Assange during his time in prison, as they discuss the meaning of the outcome and what next for the founder of Wikileaks.[5]

A Document by Yanis Varoufakis

A document sourced from Yanis Varoufakis