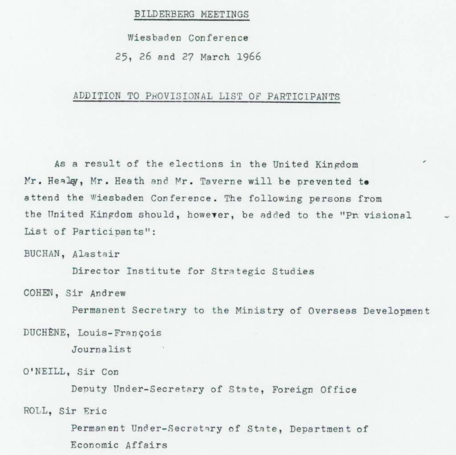 The 1966 Bilderberg Meeting was the 15th such meeting and had participants from 15 European countries, the United States and Canada. It was held at the Hotel Nassauer Hof, Wiesbaden, West Germany. The 81 guests included 10 business executives, 23 politicians, 8 financiers, 5 editors/journalists and 4 academics.

The 1966 Bilderberg Agenda has been leaked[1] and typed copies of of the speeches are also available online.[2]

1. Should NATO be reorganized and if so how?

The keynote paper was delivered by Robert R. Bowie. Since this discussion was held, all permanent holders of the position of NATO Secretary General have attended at least one Bilderberg conference prior to their appointment.

2. The future of world economic relations especially between industrial and developing countries.

Jan Tinbergen presented a paper.[2] Edward Mason spoke later on the "very difficult problem of what you might call aid diplomacy". He concluded that "with the help of the World Bank and perhaps certain other international agencies one might develop a common view as to what needs to be done to promote their economic development". George Woods speech compared foreign aid to the Marshall Plan and hoped that the way of life of many people could be changed and "improved on in many ways and made to pay off".[2] David Bell's speech concluded that "We in the United States have not yet found a hopeless case." Andrew Cohen gave a speech supportive of George Woods, concluding that "We must rive him all support. It is not sufficient to support him in words; we must help provide him with the resources which will give him more power to his arm."[2]